Against a backdrop of global uncertainty, thought leaders gave outlooks for shipping, as well as for the world economy, at the Baltic Exchange’s annual Freight and Commodities Forum in Singapore last week.

Speaking at the SGX Centre, Rahul Kapoor, senior analyst for Asia-Pacific transportation at Bloomberg Intelligence, described the world economy as “wobbling” in 2019. According to him, the economy is slowing, with “the risks” beginning to become prominent in Q1 of this year. Although the worst has passed when it comes to trade growth deceleration, a slow recovery awaits, he said. Furthermore, businesses remain hesitant on making decisions on investment.

“The global economy has lost momentum since January 2019,” Mr Kapoor said during the Forum. “Is it a technical recession or just a slowdown? I’d say it’s a slowdown, but there are mixed messages at the moment.”

Mr Kapoor’s comments reflect the latest Organisation for Economic Co-operation and Development (OECD) interim economic forecast, released by the OECD in early March. Then, the OECD claimed that the world’s economy is slowing and that major threats remain, noting that forecasts for growth in the global economy had been revised down since November last year — to 3.3% for 2019 and 3.4% for 2020. The OECD additionally said that the economy is facing increasingly serious headwinds and that economic prospects are now weaker in almost all of the G20 nations.

“A sharper slowdown in any of the major regions could derail activity worldwide, especially if it spills over to financial markets,” said Laurence Boone, the OECD’s chief economist.

In the interim outlook, a European and Chinese slowdown, plus the weakening of world trade growth, were identified as the main factors weighing on the global economy, with the forecast also noting that extra trade restrictions and policy uncertainty could deliver further adverse impacts on growth. Indeed, the current US–China trade war (plus its broader effects) is a case in point. For Mr Kapoor, a trade war is always a bad thing.

“The bigger picture is that if the two biggest economies continue to be in flux, it is not good generally,” he said at the Freight and Commodities Forum.

However, not everyone was in the same mind as the Bloomberg Intelligence analyst. At the Baltic Forum, Daejin Lee, IHS Markit principal consultant, said that a trade war is neither good nor bad, and instead just constitutes “a change”. In fact, he felt that for shipping, there could actually be a benefit to the dispute.

“It could be good for different sizes as trade currently favours smaller ships, but if an agreement is reached, larger ships may be favoured,” he noted. “Trade at the moment is politicised.”

Mr Kapoor did say that Chinese economic growth is currently in a process of transformation, with the economy getting nearer to stabilisation. The Chinese economy started improving in Q2, and Purchasing Managers’ Indexes have begun to stabilise in the East Asian country. Mr Kapoor claimed that China set GDP for this year at between 6% and 6.5% but that 6.2% to 6.3% is the likely outcome, although this will depend on trade negotiations.

“The Chinese outlook was less bad at the beginning of 2019 than [it was] at the end of 2018,” Mr Kapoor said. “Indicators show improvement suggesting domestic demand might bottom out by early Q2. But there is a chance of disinflation — we need to watch out for this.” 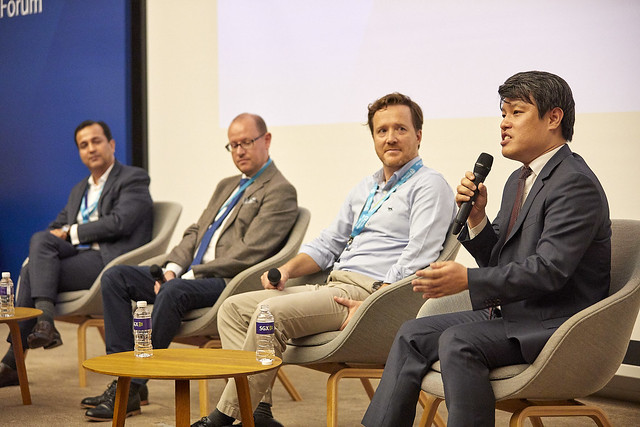 According to Mr Lee, the general consensus is that both the dry bulk shipping and the shipbuilding industries have “passed the floor” but that liquid industries remain under pressure. While the dry bulk market has come back from a historical low of 290 points in February 2016, a phase of above-trend growth has ended. Still, the consultant believed that in comparison to previous years, dry bulk trade will grow.

“Supply is decreasing as there is scrapping for many capesizes and slippage for newbuildings,” he said, before adding: “We can see hope in terms of supply in the second half of this year.”

Looking at specific dry bulk commodities, Mr Lee noted that Brazil has begun the grain season in a strong manner. For coal, India is anticipated to become Asia’s biggest coal importer, overtaking China. However, Mr Kapoor noted challenges ahead for coal. He said that Chinese coal imports are set to fall as domestic mines fill the gap. Furthermore, geopolitics is still playing a role in price and demand forecasts for this commodity.

Looking at iron ore commodity pricing, Mr Kapoor argued that “if you are an iron trader, you can be very happy”.

“The iron ore market is in a deficit now and pricing support remains on the tighter supply/demand balance,” he said.

Turning to iron ore volumes, Mr Kapoor said that prior to the Vale dam disaster, which resulted in hundreds of deaths, Vale’s production forecast was for 400m tonnes in 2019, but now, Bloomberg Intelligence predicts production of 325m tonnes in 2019 and 370m tonnes next year. This constitutes a loss in supply of 13% to 20%.

“Australia has confirmed that it cannot ramp up production to fill the supply deficit,” said Mr Kapoor. “Port inventories will not build in 2019. This could lead to a near-balanced market in 2020.”

“10% of Vale production has gone — 40m tonnes,” said Mr Lee, adding that Brazilian iron ore exports dropped 25.9% year-on-year in March. “That means there will be 50 capesizes out of the market. This is 3% of the fleet. This is huge, but this is all in H1. H2 will be a different story. That means that in Q3 or Q4, we might get a surprise.”

“I hope [for] any shipowners that that have installed scrubbers that the investment pays off with a wide price spread between the high and low-sulphur fuel prices,” he said. “It is a big gamble. It’s the Y2K moment. That spread needs to last for 24 months.”

However, he noted that there will be rising costs regarding compliance and storage — with this actually being good for shipping.

“I think if we see IMO 2020 as a wild card, [there is] short-term pain, but it does take out a bit of capacity, it makes older ships obsolete, and that in the end will start percolating into shipping supply,” he said. “This will be good for shipping in 2021 to 2022.”
Source: Baltic Exchange