Home / Shipping News / Port News / Behind the Scenes of the Expansion: Bolstering Gender Equality at the Panama Canal

Behind the Scenes of the Expansion: Bolstering Gender Equality at the Panama Canal

The Panama Canal’s current Deputy Administrator & Lead Engineer for its Expansion reflects on how the project reshaped world trade and promoted female leadership at the waterway.

A few days ago, the Panama Canal celebrated the sixth anniversary of the Neopanamax Locks, which were inaugurated on June 26, 2016. The wider set of locks was constructed as part of the Panama Canal Expansion, the largest enhancement project in the waterway’s history, which created a third lane for traffic and doubled its cargo capacity.

Along with advancing worldwide trade, furthering the local and global economy, and reducing shipping emissions, the Expansion also had an overlooked outcome—bolstering gender equality. Ilya Espino de Marotta, Panama Canal’s current Deputy Administrator and the Lead Engineer for its Expansion, shared her thoughts on the Expansion’s long-term impact below:

“It may not be easy, but I would encourage any female engineer to be unabashed in achieving your goals and to seek out a group who can support you along the way.” – Ilya Espino de Marotta

The Expansion was lauded as a major milestone for the Canal. How has the global economy been impacted by the project?

I am proud to say the impact of the Expanded Canal has reverberated well beyond Panama’s shores. The Expansion enabled the Canal to accommodate 96.6% of the world’s containerships—giving shipping lines more options to consolidate cargo on larger vessels and fewer voyages while reducing time, fuel, and emissions. Many ports around the world also decided to modify their navigational channels and expand their terminals to accommodate the growing number of Neopanamax vessels that transit the Panama Canal. Especially along many U.S. East Coast ports, like Miami, Baltimore, Virginia, and Charleston, we’ve seen record-breaking investments, tonnage, and growth that can be directly linked to the Panama Canal Expansion.

Expansion by the Numbers: The Canal Expansion included the construction of a new set of locks on the Atlantic and Pacific sides of the waterway and the excavation of more than 150 million cubic meters of material.

As Lead Engineer, what did it mean for you to oversee the Expansion project?

I started working at the Panama Canal in 1985 as one of two women engineers in the Industrial Division shipyard. Working in the shipyard allowed me to design something in the office and then see it come to life in the field, and finally through a vessel transit. I rose through the ranks to lead the Panama Canal Expansion project, by far the highlight of my career. The sheer feat of the engineering project was an exciting challenge. That tangible process and success was very rewarding for me. To be honest, I never imagined that I would lead a project, especially one of the Expansion’s magnitude, where I managed 800 engineers—14% of whom were women. As a woman in a leadership position, I felt it was important to inspire other women across industries to reach for those opportunities.

Expansion by the Numbers: The construction of the Expanded Canal was based on 10+ years of research, which included more than 100 studies on the economic feasibility, market demand, environmental impact, technical engineering, and more.

We just celebrated International Women in Engineering Day on June 23—what advice would you give to encourage more female engineers in the industry?

I truly believe that women can do whatever they want to do. It may not be easy, but I would encourage any female engineer to be unabashed in achieving her goals and to seek out a group who can support her along the way. When I first became an engineer, I did not have many female coworkers or role models to look up to. All the people who gave me leadership opportunities were men. So male figures in the industry should step up and provide sponsorship and mentorship to help female coworkers. For the maritime industry, it’s critical to work together to ensure women are involved and hold leadership positions. I would also tell women not to be afraid of celebrating themselves or leaning into their role as a woman in engineering. For me, I chose to wear a pink safety helmet and vest because I wanted everyone to know that I was proud to be a woman and excel at my job. 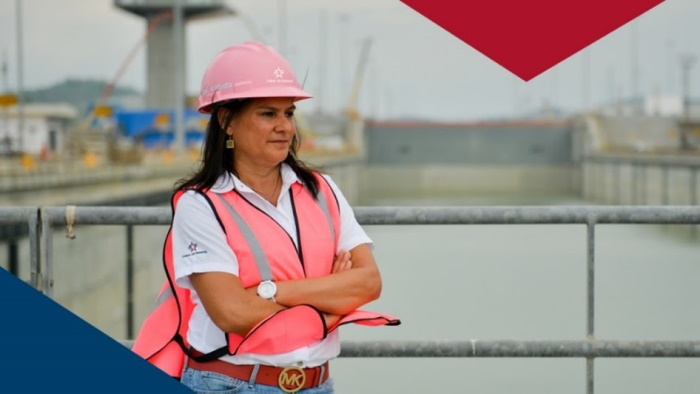 Who inspires you in your work at the Canal?

I am proud to work alongside more than 1,000 women who play a crucial role in the success of the Panama Canal. They touch some of the most important aspects of the Canal’s day-to-day work—transit operations, human talent, environmental impact, and more. Annette Sayavedra de López, Vice President for Human Capital, for instance, has worked diligently to enable more women to enter the Canal’s workforce through new initiatives. Magnolia Calderón, Vice President for Water Resources Management, has led efforts to bring the watershed community together to protect our most precious resource—water. Marianela Dengo, Vice President for Communication and Corporate Image, has helped elevate the Canal’s external relationships and standing as a leader in global trade for over 20 years. I could go on and on.

What’s next for your team at the Panama Canal?

One of our main priorities is meeting the Canal’s goal of being carbon neutral by 2030. We are in the process of consolidating our offices to reduce our carbon footprint, among other actions that will help us accomplish this target. We are simultaneously developing infrastructure solutions that will secure long-term water availability for our operations and the Panamanian people. To ensure we are providing the most value and operational efficiency to our customers, the Canal is also kicking off a multi-year digital transformation program. Over the next decade, we will invest a significant sum in new tools that can harness advanced data analytics to better understand clients’ needs and long-term projections. The digital transformation of the Canal will change the future of our business—leveraging big data to help us become more agile, efficient, and valuable for our customers. Like with the Expansion, I expect these projects will not only reshape our future, but also help highlight a new wave of leaders at the waterway. I look forward to seeing the involvement of more women supporting and leading these endeavors that will pave a path toward a more inclusive, efficient, and sustainable Panama Canal.
Source: Panama Canal Authority (ACP)