Beware the Wrath of the Chinese Consumer

There’s a dog that hasn’t barked in the current round of trade tensions between the U.S. and China: Despite the first direct tariffs coming into force Friday, the Chinese consumer has been on her best behavior.

That’s somewhat unusual if you consider Beijing’s most recent diplomatic spats with its trading partners.

Yang Bingyang, a former model who’s known online as Ayawawa, encouraged her 2.7 million Weibo followers to boycott Korean products. “Every penny we spend is a vote on our future world!” the state-owned Global Times quoted her as saying. Hyundai Motor Co.’s market share in China was cut almost in half within a month. Lotte Shopping Co.’s local sales tumbled 84 percent from the March to June quarters of 2017 after local authorities shut stores alleging fire safety violations, and the chain is now pulling out of China altogether. 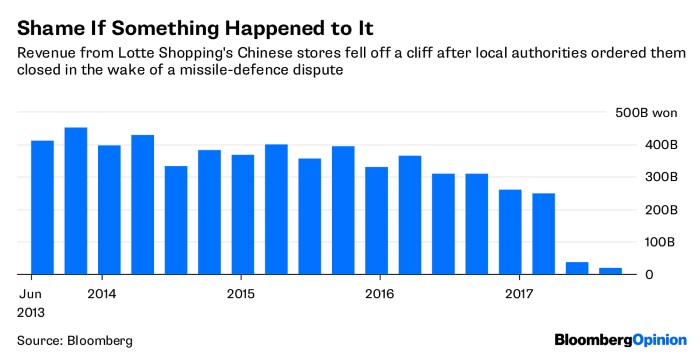 It was a similar story in 2012, during one of the periodic flare-ups over islands in the East China Sea claimed by both Japan and China. Nationalist crowds ransacked a Toyota Motor Corp. dealership and set a Panasonic Corp. factory ablaze.

To date, there’s been little sign of that sort of thing in this dispute. Despite claims of reduced buying of U.S. soybeans and disruptive import checks on fruit and pork in recent months, the dreaded non-tariff barriers have been confined to regulatory measures, rather than consumer boycotts.

China in December overtook the U.S. as the world’s biggest retail market. It’s the largest market by volume for General Motors Co. and the second biggest for Starbucks Corp., which expects sales in the country to overtake those from North America within a decade. Apple Inc. has some $45 billion of revenue there, while Las Vegas Sands Corp. and Wynn Resorts Ltd. would collapse without the dollars flowing from their Macau casinos. 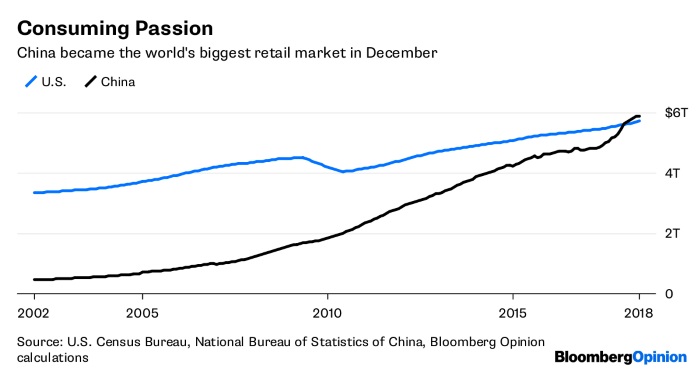 How to account for the relative silence? One explanation is that we’re simply too early in this dispute for the big guns to be brought out.

The expected tit-for-tat response to the $34 billion of U.S. tariffs Friday is an indication China’s government is still happy with the conventional trade weapons in its armory, and wary of reaching for anything more powerful.

There might be more to it, though. China has been careful to pose as the good guy in this fight. The spectacle of Beijing unleashing nationalist boycotts on Procter & Gamble Co., Coca-Cola Co. and Apple would make that facade harder to maintain, and give ammunition to the U.S. argument that China’s economy is ultimately a tool of the Party. 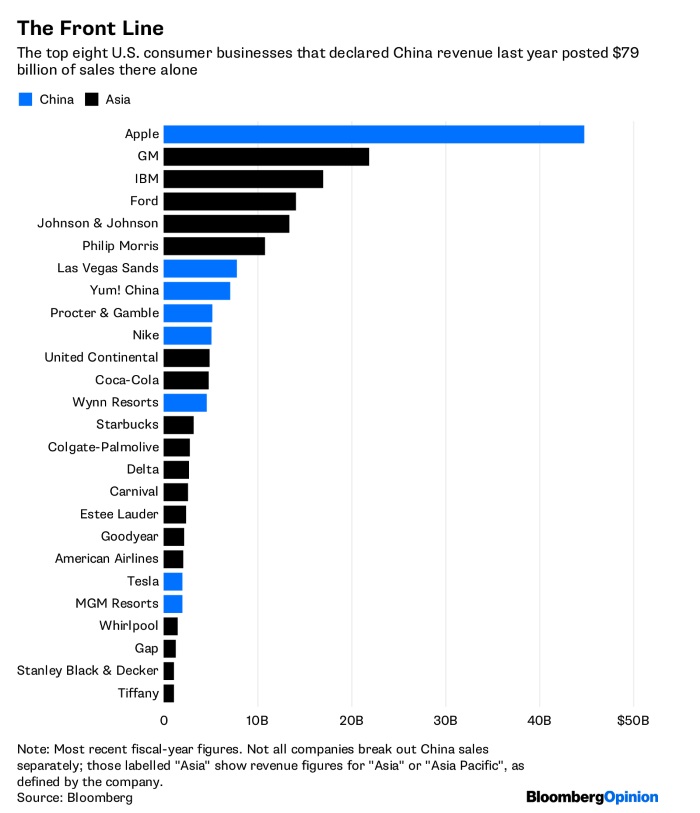 The lack of consumer boycotts is “a bit unusual, but consistent with the Chinese rhetoric that China would be a defender of the global trading order,” Victor Shih, an associate professor and expert on China at the University of California, San Diego, said. “The reality is that the status quo allows China to protect many of its industries, so China wants to maintain the status quo.”

Don’t count on that forbearance continuing if tensions escalate. In all, Chinese subsidiaries of U.S. companies had about $223 billion in revenue in 2015, according to Deutsche Bank AG. Reduce those sales by just 20 percent – a rather modest target, given what consumer boycotts did to Korean firms last year – and you’ve already done $45 billion in damage, more than equivalent to the 10 percent tariff the U.S. is threatening to levy on a further $400 billion of imports if Beijing doesn’t back down.

That’s reason enough for Washington to reduce the temperature of this fight before a chorus of complaints from boycott-battered U.S. companies force it to do so. The Chinese people – reading from a script, to be sure – haven’t spoken yet. Smile at them, pay them, pass them, but do not quite forget.
Source: Bloomberg

2018-07-07
hellenicshippingnews..
Previous: How trade war with U.S. can hurt growth in China and beyond
Next: U.S. Has Launched ‘Largest Trade War in Economic History,’ China Says