Limited LNG bunkering infrastructure has long been blamed for holding back the shipping industry’s adoption of LNG as a fuel. It’s a textbook chicken-and-egg problem: Fleet operators won’t switch to gas if they cannot be confident of supply, while suppliers won’t invest if they don’t see sufficient demand. Avenir LNG – a spin-off of Stolt-Nielsen Gas – thinks it has found a way to crack the problem and make small-scale LNG distribution to ports not served by pipelines a reality.

As a long-standing chemical logistics business Stolt-Nielsen has established an integrated network of ships, terminals and distribution channels for transporting chemicals to every corner of the globe. However, there are virtually no such integrated networks established for the distribution of LNG, which makes it difficult to transport gas cost effectively between suppliers and customers – particularly when relatively small volumes and remote or unfrequented locations are involved.

Alongside land-based energy customers and industrial concerns such as power generation, smelters and chemical plants, these cases of stranded demand include a steadily growing number of ship operators that would use LNG as a fuel if only they could be sure about availability of supply. Stolt-Nielsen saw this situation as a challenge waiting to be solved and a commercial opportunity.

In 2017, Stolt-Nielsen formed Avenir – a separate entity dedicated to providing LNG to markets lacking ready access to pipelines. Andrew Pickering, CEO Avenir LNG Ltd, explained the rationale: “The business of large-scale LNG distribution is sewn up. There are well-established trades linking major suppliers and major customers, and the market incumbents have little appetite to complicate their operations extending their reach and catering for smaller customers.

“When we examined the dynamics of the small-scale market, we discovered it closely replicated what we were already doing. We saw a way of transferring our existing infrastructure, integration and expertise to get up and running pretty quickly, without needing to recreate any core competencies.”

The plan, says Pickering, is to place vessels where there is a secure base load so that ships and terminals can be financially underwritten. Once that’s in place, peripheral opportunities can be explored and developed to support incremental growth.

Avenir is constructing an LNG terminal and distribution facility in the Italian port of Oristano, Sardinia, which is due to come online in mid-2020. The company is close to a final investment decision for a project to ship LNG from the south of England up to Scotland, which is expected to come online in autumn 2021. The latter, says Pickering, is a classic example of stranded demand: “Gas was coming into Kent and then being trucked up the length of the country to customers in Scotland. How can that be efficient?” Avenir is also on the shortlist for a government-backed project in Quebec, Canada.

Stranded demand is only half the picture, the flipside of which could be described as stranded supply. Most large terminals are not set up to cater for smaller LNG carriers, says Pickering. Instead, an answer was found in underutilized FSRU vessels. Initially Stolt-Nielsen leveraged its strong relationship with Golar LNG, which, as it turned out, had FSRUs with spare capacity situated close to areas of stranded demand. Later, it approached Hoegh LNG, another large FSRU operator, which had eyed the small-scale distribution market as ripe for development but was yet to step in.

“Everything was coming together. Having both Golar and Hoegh on board would provide global coverage, which we could sew together into a seamless offering.” The conversation culminated in October 2018, when the three companies announced a combined investment commitment of $182 million in Avenir. Stolt-Nielsen will consolidate all its LNG activities into Avenir, including an additional two 7,500m3 gas carriers plus two already on order at Keppel Singmarine in Nantong, China, two 20,000m3 gas carriers also being built in Nantong by Sinopacific Offshore & Engineering and the joint-venture LNG terminal and distribution facility in Sardinia. 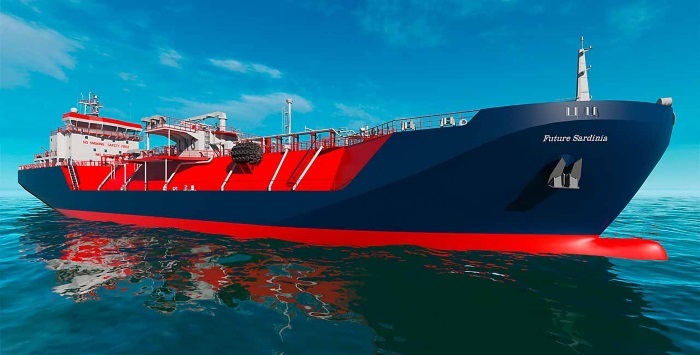 In the design of its ships, Avenir turned conventional wisdom on its head. Pickering elaborates: “We took the opposite approach to our competitors. We consider them first and foremost as transport vessels – not bunkering ships – and that’s what drove the design. The optimization of the hull form, the dual-fuel engine and propulsion arrangement, the fuel system and auxiliaries were all optimized with the transport function in mind.”

During their design, particular attention was paid to the gas containment and fuel system, as the goal was to match boil-off gas with consumption and to get both low. In addition to sophisticated boil-off gas management, bunkering functionality is bestowed through increased pumping capabilities, ship-to-ship transfer equipment and enhanced manoeuvrability for approaching receiving ships and accessing smaller customer sites.

The collaboration with DNV GL was a key enabler in the design of the vessels. Pickering elaborates: “They immediately grasped the broader picture of what Avenir wants to achieve – rather than approach the project as a simplistic compliance exercise. With an ambition to create a sustainable small-scale LNG supply chain that will one day operate globally, understanding both the operational and business implications of that vision must go hand-in-hand with technical ingenuity as we encounter challenges during that journey. The ships themselves are individual components in a bigger machine.”

While Avenir’s business model is currently centred around serving power and industrial customers, it anticipates growth in marine bunkering. “The appetite for LNG as a fuel for ships is picking up. We envisage the market in a few years will look very different from today, with more local import and storage facilities making LNG increasingly accessible and therefore appealing to shipping.”

The forthcoming IMO 2020 regulations on fuel sulphur are one of many driving factors for increased small-scale LNG consumption. “With less than a year to go, there’s still considerable uncertainty. Some owners are investing in scrubbers while others are waiting to see how the supply situation for low-sulphur products develops,” observes Pickering.

With more owners ordering and taking delivery of vessels that are specified as LNG-ready, the major obstacle, he contends, isn’t so much technical preparation but the patchiness of supporting infrastructure. “Conversions are being stalled due to a lack of options for LNG bunkering. What owners require more than anything else is confidence that they can obtain fuel when they need it – and today that isn’t there. This reality is reflected in the behaviour of the band of highly committed – mostly north European – owners who have set up individual supply chains. But that adds cost.”

In short, he concludes, the system isn’t working. “Greater standardization and globalization would bring economies of scale that cannot be realized with the present ad-hoc approach. This is what Avenir wants to achieve. We want to remove the ‘leap-of-faith’ element from decisions owners have to make when weighing up whether or not to go ahead with a conversion.” 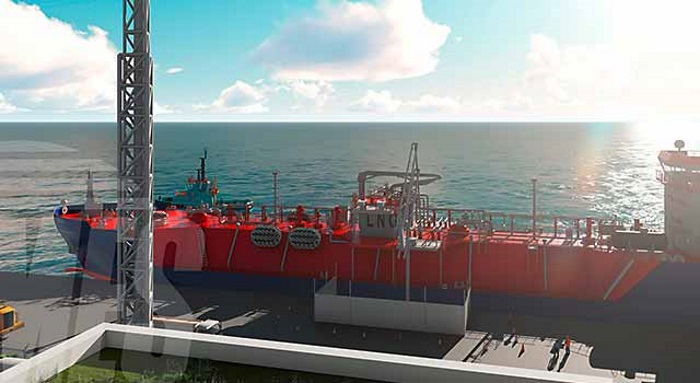 There are signs the industry is edging closer to an inflection point. In the same week as Golar and Hoegh put their money behind Avenir, Hapag-Lloyd announced its intention to convert a 15,000-teu ship, the Safir, to run on LNG, citing more favourable economics than burning LSFO after 2020. If the retrofit of the engine from HFO to LNG/LSFO dual-fuel operation is deemed a success, the Hamburg-based container line may go on to convert up to sixteen other large LNG-ready box-ships in its fleet.

Naturally, Pickering is enthused. Firstly, it sets an important precedent as the economics of conversion are generally more challenging than newbuilds. A major player like Hapag-Lloyd making this move could precipitate a wider change of thinking across the industry, he says.

Secondly, it suggests Avenir has chosen its moment well. “Success in small-scale LNG distribution hinges on timing. You’ve got to get it right – move too early and you won’t have the customers; move too late and your customers will have found alternative suppliers or set up other arrangements, perhaps pivoting away LNG altogether.”

The short to medium outlook certainly seems bright for Avenir but 2020 isn’t the only momentous year for shipping. IMO’s roadmap for decarbonization means the industry is now setting course for another deadline in 2050. “It will transform the industry completely and in ways we cannot easily predict. There is a lot of excitement surrounding hydrogen, for example. But until production processes mature and can be scaled to commercial volumes, it is hard to work out the economics as a marine fuel. In the meantime, there will be a growing requirement for interim solutions based on known clean alternatives like LNG.”

Previous: Seafarer Desertion – The Club’s Experience
Next: Dry Bulk Market: The Case for the US Coal Exports to China Trade