Worldwide orders for newly built commercial vessels peaked in 2007 at 85.3 million Compensated Gross Tonnage (CGT) and have never recovered, despite the boom in the intercontinental maritime trade, especially with East Asia. After a historic collapse in 2016, orders ticked up in 2017, but to a still desperately low 20.2 million CGT (new shipbuilding orders via Sea Europe):

Three countries came to completely dominate this market as of 2017: China (34%), Korea (31%), and Japan (19%), according to Japan’s Ministry of Land, Infrastructure, Transport and Tourism (MLIT), which also points at a major issue: overcapacity.

The shipbuilding industry has been plagued by overcapacity since 2010 and, with new competitors emerging in cheap-labor countries such as India and Vietnam, it seems oversupply will get worse over the next few years. 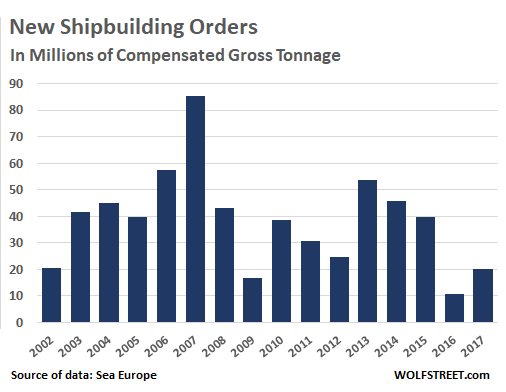 To understand how important shipbuilding is for the Korean economy as whole, one only needs to look at Geoje Island, near the port city of Busan. Both DSME and SHI have their main shipyards on the island, in Okpo and Gohyeon respectively, and especially at Ulsan, where HHI’s main shipyard, the world’s largest by capacity, is located. Ulsan is also home to the largest car factory in the world by potential output, owned and operated by Hyundai Motor Company, a company belonging to the same chaebol as HHI.

The Hyundai Shipbuilding Division, as the Ulsan shipyard is officially known, can be considered the true poster child for the Korean shipbuilding industry: it represents its ambitions, successes, and now the many challenges facing it.

This shipyard looks like a cross between a sprawling state-of-the-art-manufacturing facility and a futuristic nightmare, stretching as it does over a massive four kilometers of coast, At the heart of this industrial conglomeration are nine dry docks and what once was the world’s first H-dock.

The H-Dock is used to build specialized vessels and floating structures, from Tension Leg Platforms (floating platforms for oil and natural gas exploration) to pipe-laying ships. The dock is 490 meters long, 115 meters wide, and 13.5 meters deep (1 meter = 3.28 feet) and is advertised as being able to build any kind of vessel customers may conceivable want.

HHI boasts that Dry Dock #3, the world’s largest at 672 meters long and 80 meters wide, a product of the unbridled economic expansion of the 1990s, can be used to build vessels up to one million DWT (Deadweight Tonnage is a measure of how much a ship can carry, including paying cargo, ballast, fuel, provisions, and crew and passengers).

All vessels over 400,000 DWT ever built proved to be unsatisfactory in service and, despite the present trend towards larger and larger ships to increase efficiency, it’s highly likely no more will be built in the foreseeable future: even the Valemax bulk carriers, which are certified for 400,000 DWT are rarely over 270,000 DWT these days. This means Dry Dock #3 is used to build two or occasionally three ships at the same time.

The Ulsan Shipyard also boasts ten “Goliath” gantry cranes; while Goliath is a trademark of Kone Cranes of Finland for their family of ultra-large gantry cranes, it has come to indicate any oversized and extremely powerful gantry crane, all the way up to the Taisun, owned and operated by Yantai Raffles Shipyards of China, which has been certified for up to 20,000 metric tons of lifting capacity, the most powerful crane in the world (image via CIMC Raffles): 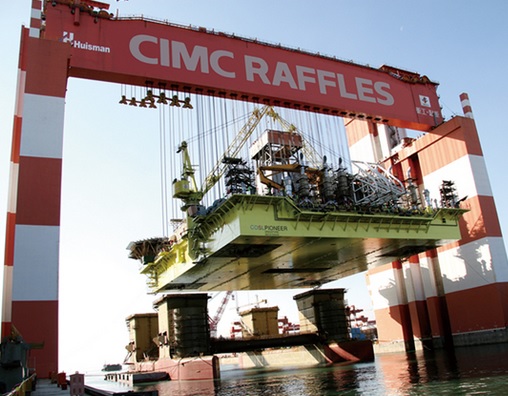 On top of this, like all their competitors, the Ulsan shipyards sport state-of-the-art metal works and steel cutting lines, and one of the only four facilities in the world that can manufacture the enormous crankshafts used in the huge slow-speed two-stroke diesel engines that propel the largest commercial ships.

The cost of labor, however – though it originally propelled Korea to the forefront of the shipbuilding industry in the 1970s and 1980s when wages in Japan were growing too rapidly for shipowners’ liking – has been a major concern for Korean shipbuilders since the 1990s.

This means all Korean shipbuilders have invested heavily into automation, both to increase worker productivity and to cut the labor input needed to manufacture a ship. These technologies include:

• Trackless crawling all position arc-welding robots, highly sophisticated industrial robots that use magnets to move on the sheets of metal they are working on, laser beams to control the welding process, and carefully controlled streams of ultra-cold pressurized nitrogen to control welding shapes.
• Crawler robots to lay the miles of wiring any commercial vessel possesses nowadays.
• Fully automated paint cycles, a sorely needed process as the anti-foul paints used on keels contain biocides such as oxine-copper, a toxic and carcinogenic compound.

The commercial policies of these Korean mega-shipyards have long been driven by one simple principle modern stock market aficionados will easily recognize: growth at any cost.

Starting in the 1980s, many European and Japanese shipyards, driven ironically by competition from Korea, decided to specialize in one or a few types of ships.

For example, Norwegian and Dutch shipyards specialized in offshore vessels used to support the oil and natural gas industries, such as seismic vessels (ships used solely to conduct seismic surveys in the high seas to pinpoint the best locations to sink drilling shafts), drill ships, and increasingly ships to install offshore wind turbines.

Korean shipyards happily filled the gap as their old competitors retrenched. But starting in the aftermath of the 1997 Asian Crisis, they found that China was starting to eat into their order books, especially when it came to low-tech vessels such as bulk carriers, which do not require advanced design and manufacturing capabilities.

In 1999, the EU Trade Commission concluded the Big Three were selling ships “up to 40%” below production cost in an aggressive bid to both undercut their European competitors and to keep the new and aggressive Chinese shipbuilders at bay in the midst of a global order glut. This led to a nasty spat between the EU and the Korean government that ended with a complete victory for the latter.

This proved to be a victory of the Pyrrhic kind however.

In June 2016, Clarksons Research released an alarming report: in the midst of a protracted glut for new ship orders, the Big Three of Korea had for the first time in modern history failed to secure a single commercial order in Q1 2016. It was but the first sign of the incoming storm.

WOLF STREET reported on the “death spiral” of orders at the shipyards in Korea, Japan, and China in May 2016 and again in November 2016.

On June 7, 2016, the Korean police raided the DSME headquarters in Okpo. Eight days later it was revealed this raid had been ordered by Korean authorities following the discovery by the Board of Audit, a government body, of a massive accounting fraud at DSME.

At 1.5 trillion Korean won ($1.28 billion), it was the largest financial scandal in the country’s history and it led to a spate of high-profile arrests, including the former head of audit firm Deloitte’s operations in Korea, accused of having misled investors by helping DSME executives to paper over huge losses. It couldn’t have happened at a worse time.

At the time of the police raid, the Big Three were in the final stages of a long and difficult negotiation with their creditors, orchestrated by Korea’s Ministry of Strategy and Finance. The final combined renegotiation and restructuring deal (officially labelled “self-help plan”), worth a staggering US $8.8 billion, was announced on June 11, 2016, while most of the senior DMSE executives were either in jail or handing in their resignation letters.

On 31 October, 2016, the Korean government announced with fanfare a grandiose scheme to “help shipbuilders win over 250 firm orders for ships over 100GT” by the end of 2020. It is effectively a plan of massive subsidies to delay as much as possible the sorely needed downsizing and reorganization of the Korean shipbuilding industry.

The scheme, which will run to the end of 2020, comprises (all values are in 2016 US dollars) $9.5 billion in tax breaks and assorted fiscal benefits for all shipbuilders which will take part in a hazy “government directed restructuring plan,” $5.5 billion in direct subsidies to buy new equipment, “improve efficiency,” and set up new production lines “to provide high value-added services,” and finally $1.4 billion in direct subsidies for small, mostly family-owned shipyards to be distributed through city governments.

To help DSME get through this rough patch of its own making, the Korea Development Bank (KDB) and Export-Import Bank of Korea (KEXIM) have also agreed to provide 2.9 trillion won in fresh funds: both banks are wholly owned by the Korean government.

At the end of 2017, the financial media breathlessly reported that Korean shipyards saw their order jump by a “miraculous” 187% year-over-year. Very few outside the maritime industry bothered reporting that this came hot on the heels of the worst year for the Korean shipbuilding industry in the modern era and that heavy government subsidies had been a deciding factor.

Yet it’s still not clear exactly what shape the “government directed restructuring plan” will take: everybody in Corporate Korea remembers very well the serious labor unrest in 2010, when perpetually troubled Hanjin Heavy Industries was forced to fire several hundred workers. Nobody wants to see a repeat of that.

In a way, this whole fiasco is representative of many industries: Overcapacity and growth at any cost need to be tackled, but what is lacking is the political will and the support from a public that has been kept in the dark or lied to for so long that it now struggles to tell truth from fantasy.
Source: Wolf Street