Despite the very strong freight rates and the apparently tight market, the all-important driver for dry bulk shipping, China, has in fact seen imports of its two largest dry bulk commodities shrink year-on-year so far this year. The two largest imported commodities for China, iron ore and coal are however, interestingly on two different trajectories, as the latter could be ending the year with higher total volumes than in 2020.

“The high freight rates that the dry bulk market is currently enjoying cannot directly be linked to higher volumes from the world’s largest dry bulk importer. Although though Chinese imports have been solid this year, they have in no way provided the rate of growth needed to justify the current freight rates,” says Peter Sand, BIMCO’s Chief Shipping Analyst.

“Instead, the key must be found in the inefficient supply of shipping capacity to costumers, with ships being tied up at ports for longer due to COVID-19 restrictions and disruptions. This increases the time it takes for a ship to complete a voyage, delays the ship in starting a new one and thereby “artificially” drives up the freight rates,” says Sand.

In the five months that followed, between May and September, Chinese iron ore imports totalled 460.8m tonnes, representing 49.5m tonnes less than in the same period of 2020, a loss equivalent to 165 Very Large Ore Carrier (Capesize) loads (300,000 tonnes). Over the whole year, the loss is smaller given the stronger imports in the first four months with total imports down 25.5m tonnes (86 Capesize loads). The impact on the fall in Chinese iron ore imports has been mitigated by the origin of the iron ore. Imports from Australia, by far the largest supplier of iron ore to China, have fallen by 3.7% to 517.8m tonnes in the first nine months of the year. On the other hand, the three-times longer haul trade that imports from Brazil represent, has seen volumes grow by 5.5% in the first nine months of 2021 compared to last year, somewhat compensating. 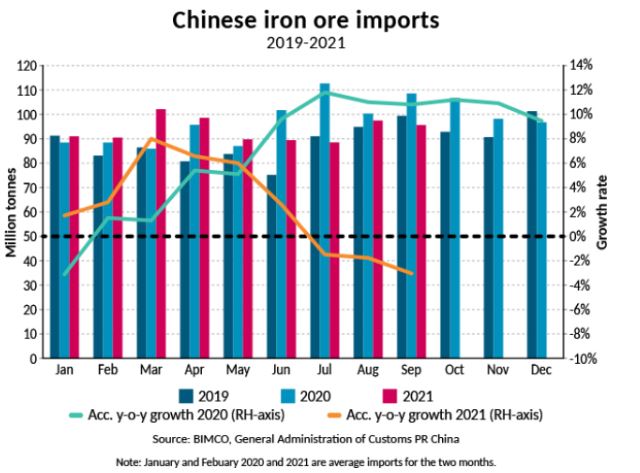 Together, Australia and Brazil account for 81.7% of total Chinese iron ore imports, and while combined volumes have fallen by 1.6% compared to the first nine months of 2020, when looking at tonne miles, overall demand for shipping has increased because the growth from Brazilian imports provide much longer sailing distances.

A journey from Ponta de Madeira, Brazil to Qingdao, China, sees a ship covering 12,028 nautical miles, whereas a journey from Western Australia to Qingdao provides a much shorter distance of 3,582 nautical miles. This translates into tonne mile demand of 1.86 billion tonnes for iron ore from Australia and 2.05b tonne-miles from Brazil, evening out both exporters’ importance to the dry bulk market and, given the growth from Brazil, leading to marginal growth in shipping demand generated by the two largest iron ore exporters to China (+0.7%).

Despite slow start to the year, coal volumes may yet end up growing

Unlike iron ore imports, which had a strong start to the year and have since fallen below last year’s levels, Chinese coal imports have in recent months been posting positive year-on-year growth rates. Additionally, while accumulated volumes after nine months remain lower than in the same period in 2020, total imports by the end of the year could well end above the 304.0 million tonnes imported in 2020, as power shortages have caused the government to reconsider policies aimed at lowering emissions. In the first nine months of the year, Chinese coal imports are down by 3.6% compared to the same period in 2020. The deficit in volumes compared to last year are however narrowing and have been doing so every month since April. In fact, imports in September of 32.9m marked the highest monthly exports since December 2020 when Chinese customs data reported staggeringly high imports of 39.1m tonnes. The recent month-on-month increase in imports can be linked to the widely reported coal shortage in China, and its attempt to ensure enough supply. In addition, the pick-up in coal imports can be attributed to recent announcements that restrictions on domestic production (enforced with the aim to reduce emissions) will be eased. In September, China produced 33.4 billion tonnes of coal and in the first nine months of the year total domestic coal production has risen by 3.7% to 293.1b tonnes. 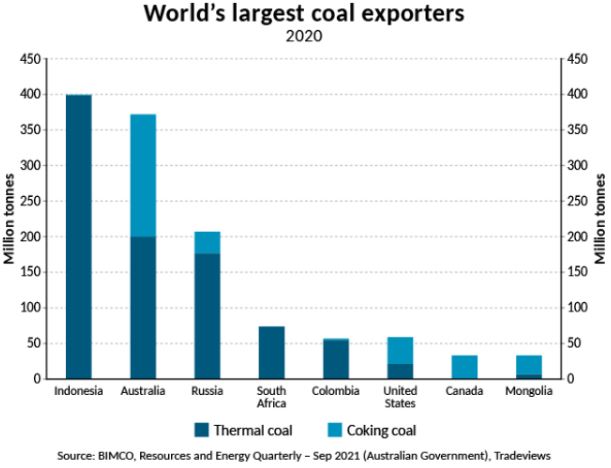 The largest increase has come in imports from Indonesia, up by 33.4% in the first nine months of the year to 143.2 million tonnes. In September 21.4m tonnes of coal was imported from Indonesia, the second highest monthly imports ever and more than four times higher than imports in September 2020. December 2020 holds the record for Chinese coal imports from Indonesia at 26.3m tonnes, according to Chinese customs data. Indonesia exports thermal coal which is needed to produce electricity. Therefore, this is an easy first choice for China given that its electricity production is being affected by its short supply of thermal coal.

Indonesia is the world’s largest exporter of thermal coal, exporting more than twice as much as second placed Australia. While the latter is the world’s second largest thermal coal exporter, it is also the world’s largest coking coal exporter by far, forcing Chinese steel mills to look elsewhere for suppliers of coking coal in the wake of the Australia-China trade war. Imports of coal from Russia, which predominantly exports thermal coal, are up 64.7% in the first nine months of the year but remain much smaller than those from Indonesia at 42.8m tonnes. Oceanbolt estimates that 39.5m tonnes of coal has been transported by sea between Russia and China, the majority coming from eastern Russia, but with a few loads out of the west of the country. “Indonesia has clearly stepped up to fill some of the gaps left in Chinese thermal coal imports after their shunning of Australian coal. Chinese customs data show no imports of coal from Australia so far this year. However, over recent months anecdotal evidence points to some of the ships that had been caught in the crossfire and waiting outside Chinese ports for hundreds of days have now been allowed to discharge, fuelling hope of improvement,” says Peter Sand.

“As China struggles with power shortage, thermal coal imports over the next few months look set to stay strong, increasing the likelihood that total imports this year will exceed last year’s, as China adjusts its policy, both in terms of domestic production and imports in response to the shortages.”
Source: BIMCO, By Peter Sand, Chief Shipping Analyst

Previous: Britain’s Sunak Tries To Move On From Pandemic With New Spending
Next: Ship Owners’ Wary of Oversupply “Killing off” the Dry Bulk Market’s Recovery