BIMCO: Far East container spot rates to Brazil up by 230.5%

A lot of people is currently on a steep leaning curve. Focus: liner shipping. Special topic: Why are the empties not to be found where they should be – in the export regions.

And why are some liners keen on a fast turnaround of the empties – brining them back to the fronthaul trade lanes – that they shying away from business in some parts of the world. Imbalances to the global logistics and supply chains brought around during 2020 – is here to stay for a while. “Given the current circumstances, that would offer a great opportunity to rebalance the market and get containers to where they need to be, this year’s Chinese Lunar New Year celebrations will be different and are unlikely to create the usual dip in exports”.

The red-hot spot market is a result of the imbalance of trade over the past year; the first half of 2020 was marked by blanked sailings and weak demand for container shipping. Towards the end of the year, this was flipped on its head, with demand surging as consumers started spending more money on goods than services. The demand for ships has now surged, with the idle fleet falling below 250,000 TEU, less than one tenth of what it was in May 2020 (source: Alphaliner). 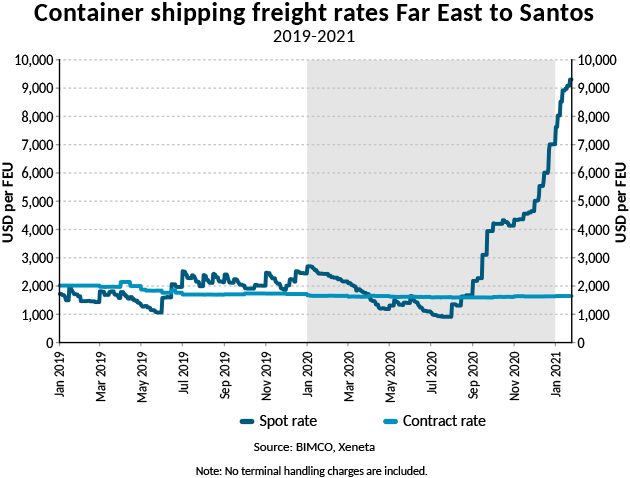 In contrast to the high spot rates, contract rates between the Far East and Brazil have been very flat. Though average spot rates in January are almost USD 6,000 higher this year than last, contract rates are a couple of dollars lower. This illustrates the fact that uncertainty over the outlook for Brazilian imports remains high in the longer term, as opposed to the current pick-up in the container market.

“Seasonally, after an uptick in January, the container market usually slows down up to the Chinese New Year, with the idle fleet rising and exports from the Far East falling as manufacturing shuts down for celebrations,” says Peter Sand, BIMCO’s Chief Shipping Analyst.

“Given the current circumstances, that would offer a great opportunity to rebalance the market and get containers to where they need to be, but this year’s celebrations will be different and are unlikely to create the usual dip in exports,” says Sand, adding:

“Looking past the Chinese New Year, the current imbalances in the market will take many months to resolve, which will continue to support the record high spot rates. However, once this immediate crisis is resolved, freight rates will fall once more, but experiences of the past year mean that carriers may find themselves able to better manage capacity and ensure profitability.”
Source: BIMCO

Previous: Baltic index falls for fifth day as capesize, panamax rates dip
Next: Ship Owners Are Experimenting With New Fuels As the Clock Towards Decarbonization is Ticking