BIMCO: If EURO2020 was to be decided by shipping-related factors, who would come out on top?

If EURO2020 was to be decided by shipping-related factors, who would come out on top?

The European Football Championship is on the verge –and kicking off on Friday 11 June. Therefore, BIMCO’s shipping number of the week had to be football-infused today. Adding extra topping to this sporting feast is the fact that the 2021 Copa America starts at the same time.

If the result was decided by COVID-19, anything can happen
Several national football teams have already seen the supply of their top footballers disrupted by the pandemic, much like what has hit many shippers ordering containerised goods produced in the Far East for shipments to any destination; the unexpected next move of the pandemic can happen anywhere, any time; disrupting start-up troops on the pitch as well as ports world-wide.

It certainly was unexpected when Denmark won the 1992 European Football Championship, and we did not even have a pandemic then.

According to the bookmakers, the most unforeseen winner of the EURO2020 is North Macedonia, which is probably the European country with the smallest amount of seaborne shipping too.

If handling the most seaborne freight by gross weight would decide the Championship
Were this the case, the Netherlands would enjoy a comfortable victory, taking the trophy after beating Italy and Spain. Do remember that the qualifiers for the EURO2020 finals were all played in 2019. 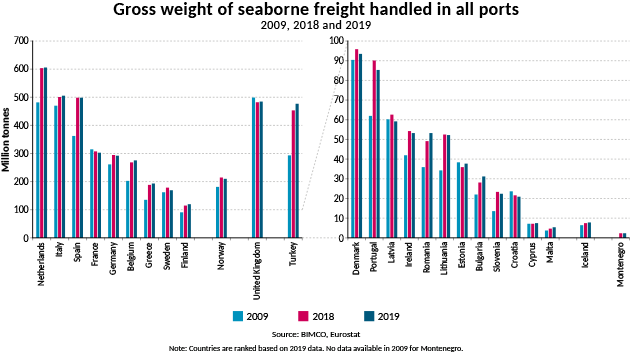 If the largest orderbook held by a single company would decide the Championship
If the size of the orderbook would determine the winning team, Switzerland would come out on top, flashing the trophy

If holding the largest fleet by gross tonnage would decide the outcome of the Championship
Here, Germany would come out on top – a surprise winner to some. Not because: “Football is a simple game; 22 men chase a ball for 90 minutes and at the end, the Germans win,” as Gary Lineker’s famous quote goes, but Germany would take home the trophy simply because Greece, which holds the world’s largest fleet, failed to qualify for the finals.

If having the largest ship recycling capacity would decide the Championship
In this case, Turkey would take a maiden win.

“The shipping industry is loaded with winners. Some very obvious ones and some less known to the general public,” says Peter Sand, BIMCO’s Chief Shipping Analyst.

“Go on yourself and find out in which maritime way your favourites would become Champions of Europe. Could it be most cargo moved on inland waterways? largest oil import terminal? or perhaps largest grains export facility?” asks Sand, a keen football fan.

Finally, the 2021 Copa America also starts tomorrow
It is the East Coast countries that dominate the game of football, just as they dominate the seaborne impact of South America. Uruguay holds a record 15 titles, with Argentina seeking to equalise that. Reigning champion, Brazil, also the most significant maritime nation will fight to retain the trophy. Game on.

Do note:
An in-dept discussion, and sharing of insights and perspectives on the current strength of the container shipping market at BIMCO’s season finale of the Shipping Markets Checkpoint webinar series has just been completed this afternoon. View or review it here: BIMCO’s YouTube Channel. Today’s guest expert speaker was Jochen Gutschmidt of Sea-Intelligence.
Source: BIMCO, By Peter Sand, Chief Shipping Analyst