In the early hours of 22 April 2021, Vale – the Brazilian mining giant, was ordered to temporary suspend shipping activities at the country’s Guaiba Island terminal, a dedicated iron ore export terminal. Later that day, the hurdle was cleared, and activities could resume. Should the market worry when Brazil’s iron ore exports are disrupted? Now, that all depends on the terminal.

Ilha Guaiba, accounts for 7% of seaborne Brazilian iron ore exports. During February and March, 11 and eight Capesize ships departed the terminal, carrying an average of 220,000 tonnes of iron ore. All but one of them headed for China (source: Oceanbolt) and disruption at Guaiba Island terminal should not cause too much worry.

Three months earlier however, on 14 January, a fire broke out at the southern berth of Brazil’s Ponta Da Madeira terminal (PDM), Pier #4. The fire had the potential to halt a quarter of all exports from the terminal if the entire Pier #4 had been forced to close, since the pier exports twice the amount of the Ilha Guaiba terminal. Disruption at any part of Brazil’s key northern Ponta Da Madeira terminal should therefore most certainly be worrying.

“12.5% of global seaborne iron ore exports is shipped out of Ponta Da Madeira – amounting to 55% of all Brazilian. Fortunately, the port has three piers, five berths and eight ship loaders. Only one loader was damaged in the fire,” says Peter Sand, BIMCO’s Chief Shipping Analyst.

“Still, exports from the damaged southern berth stopped for 18 days and exclusively using the second ship loader at the berth was not an option,” Sand says. 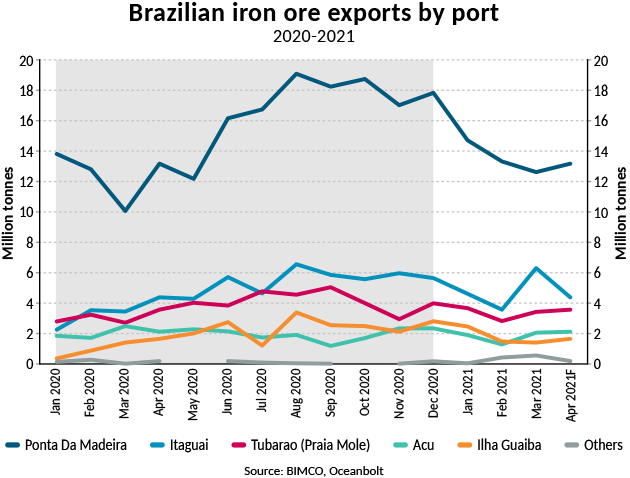 At the end of the day, and due to the low season, disruptions to the world’s most important dry bulk trade were limited, but the potential upheaval was clear and present. Surely, this will not be last scare from Brazilian iron ore operations.

Strong start to the year for Brazilian iron ore exports

BIMCO expects the first four months of iron exports out of Brazil to be up by 14.4% compared with the same period in 2020, as April exports are expected to be flat following a 20.1% surge in Q1.

As is the case for the entire dry bulk market, China’s dominance as importer is also clear when it comes to Brazilian iron ore exports. In 2020, China grew its share of global iron ore imports to 72.6% from 56.8% in 2017. During 2019 and 2020, the percentage of Chinese iron ore imports were particularly strong as overall exports fell, while the Chinese share of it continued to rise.

Malaysia comes in second place, accounting for 7% of global iron ore exports, while the Netherlands is the biggest non-Asian destination with a share of 3%.

“It is lifeblood to the capesize dry bulk market that Brazilian iron ore exports to Asia keep rising. For the whole market it is a lever which often decides the profitability of it,” says Sand.

Previous: InterManager vows to source vaccinations for seafarers
Next: COVID Outbreaks Taking a Toll on the Ship Recycling Market as Well