BIMCO: Shipping Could Face Setback On Rebound Story, on US Initiating Trade War with Allies

Months of uncertainty about the potential exemptions of the EU, Canada and Mexico’s exports of steel and aluminium to the US have ended, and with a hard hit.

The US has chosen not to extend the exemption which have triggered immediate retaliatory measures from Canada and Mexico. The EU will reveal their “rebalancing” measures against US on 20 June 2018.

BIMCO’s Chief Shipping Analyst Peter Sand comments: “The US are now firing shots against long-term allies in something which could soon become a full-blown trade war. Not only is this affecting the seaborne shipment of steel and aluminium, but the retaliation from EU will also affect the transatlantic container trade”.

BIMCO recently reported that the US imported a total of 32 million tonnes of the specific tariffed aluminium and steel commodities via the sea in 2017. The EU, Canada and Mexico were responsible for exporting 8 million tonnes, equivalent to 160 Handymax loads (50,000 DWT). 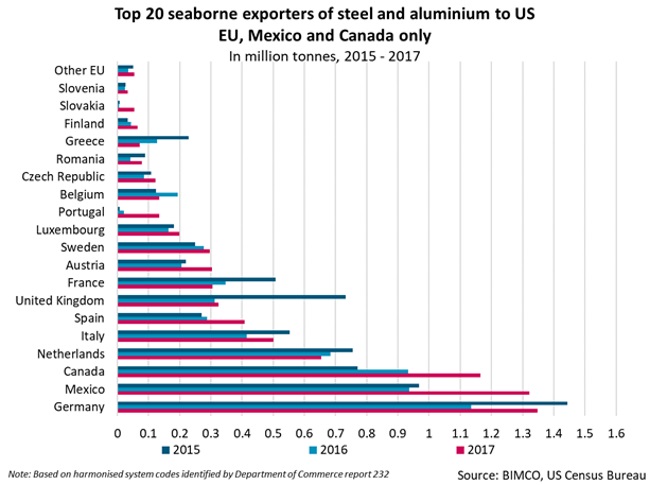 Germany, Mexico and Canada are the most significant partners

Germany is the main European steel and aluminium exporter to the US of the tariffed commodities. However, Mexico and Canada is larger when including exports via other transport measures than seaborne.

A trade war threatens the best years since 2011

The cancelled exemption of the EU, Canada and Mexico comes amid the looming trade war between US and China, which already has caused a lot of disorder, especially for the soya bean trade which is the most significant “one commodity” to be affected.

Peter Sand ends: “From a wider perspective, the effect of an escalating trade war may derail the current global upswing, which is at its highest point since 2011 and expected to continue. This will have cascading effects on shipping demand as a whole. Free trade provides prosperity and is a fundamental principle to cherish and safeguard”.
Source: Peter Sand, Chief Shipping Analyst, BIMCO

Previous: How to secure the bridge from cyber attacks
Next: VLCC Owners Rejoice Ahead of Posidonia, While Shipyards Are Looking for More Business