BIMCO: Shipping industry more hurt by developments in soya bean trades this year than last. Tonne mile demand down by 8.5%

The fall in volumes from the two countries has also led to an 8.5% drop from last year in the tonne mile demand generated by the two dominant soya bean exporters. 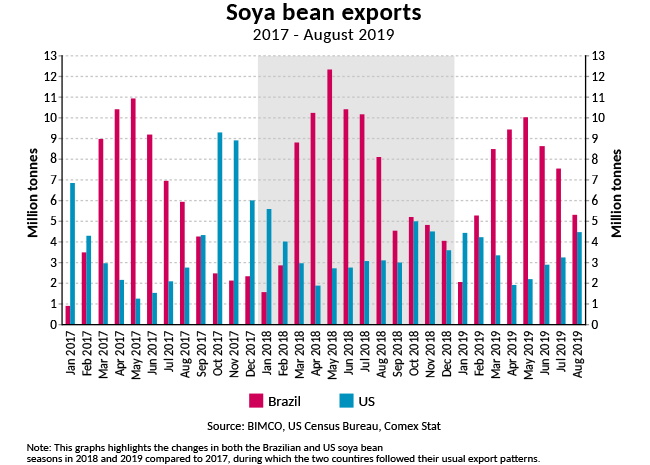 Up, but from a low base

US soya bean exports in August 2019 were the highest they have ever been in the month of August reaching 4.5 million tonnes, 1.4 million tonnes higher than exports in August 2018. This increase has pulled the US out of negative year-on-year growth which it had been in during the first seven months, with accumulated exports now 2.5% higher than they were at this time last year and tonne mile demand rising to growth of 6.5% or 12.3 billion tonne miles. This growth does not make up for the loss in tonne mile demand from Brazil, which exports higher volumes of soya beans than the US.

ith the high exports in August, US exports are now higher than they were at the same stage of 2017, before the trade war began to affect exports. Despite this good news, the outcome of the year will depend heavily on the last four months, traditionally the US’ peak soya bean export season.

”The coming months will determine the outcome of the year for seaborne US soya bean exports, with early signs that exports since 1 st September seem to be following the usual pattern of increasing through September ahead of a peak in late October and November. This would be good news for the shipping industry, but it is currently to early to call the season a success,” says Peter Sand, BIMCO’s Chief Shipping Analyst.

”During the course of this trade war an easing of tensions has often been rumoured, each time bringing with it hope that the situation would soon be resolved, only to end up with a further deterioration of the relationship between the US and China. The higher levels of offseason exports to China are good news for the shipping industry, but should not be taken to mean that things are back to the status quo, there may still be many twists and turns ahead. Once relations between two trading partners have gotten this bad, it takes a long time to restore business as usual,” says Peter Sand.

According to Chinese customs statistics, their total soya bean imports in the first eight months of the year are down 11.3% at 46.9 million tonnes.

As well as the trade war impacting Chinese soya bean imports, lower Chinese demand for soya beans has been one of the results of the massive culling of pigs that has taken place in China in response to the spread of African Swine Flu. Soya beans grown within China are primarily processed into food for human consumption, whereas imported soya beans go towards feeding livestock as well as making soya bean oil. Therefore imported soya beans are the first to suffer when there are fewer pigs to feed.

”Lower Chinese demand as a result of the African Swine Flu mean that even without the effects of tariffs, seaborne volumes of soya beans imported by the Chinese may not return to levels seen in 2017 for some years,” says Peter Sand.

Brazil more than covered the shortfall from the US in 2018

Looking only at Brazil, soya bean exports in 2018 reached 83.3 million tonnes, generating 847.3 billion tonne miles, with growth of 22.2% and 22.6% respectively compared to 2017. Brazil benefited from the increased demand from China for non-US soya beans, with its offseason exports in particular higher than usual. While in the first half of 2018 growth stood at 5.2%, Brazil exported 37 million tonnes in the second half of 2018 more than twice what was exported in the last 6 months of 2017, which boosted full year export growth up to 22.2%.

”What matters most to the global shipping industry is the tonne mile demand generated by the trades and although volumes were lower in the second half of 2018 than 2017, increased exports from Brazil managed to limit some of the damage that could otherwise have been inflicted on the dry bulk shipping industry,” says Peter Sand. 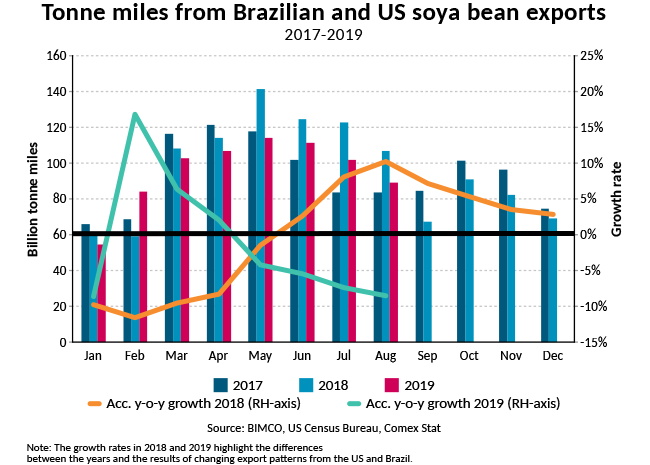 In the first eight months of 2018 tonne mile demand from the two countries had grown by 10.3%. At the time Brazilian exports were up by 12.5% in tonne miles on the back of a strong export season while US exports were up 3.1%. The growth in the US soon faltered with total tonne mile demand from US soya bean exports in 2018 down 29.5% compared to 2017, demonstrating the importance of the first months of the exporting season. US exports in volumes the last four months of the year were 43.6% lower than in the same period in 2017.

Brazil and the US are by far the largest soya bean exporters in the world and in 2018 accounted for 86.1% of total seaborne soya bean trade (source: Clarksons). The two have distinct soya bean marketing seasons reflecting the differences between the northern and southern hemisphere growing season. Brazil’s main season runs from March through to June, whereas the US peaks later in the year: between September and December. In 2017, which was the last full year unaffected by the trade war, Brazil exported 58.1% of its soya beans in the four months from March to June with the US also exporting more than half (54.4%) of its soya beans in the four months of its peak season.
Source: Peter Sand, Chief Shipping Analyst, BIMCO