Due to supply concerns at domestic power plants, Indonesian authorities banned coal exports during January 2022, removing around 30% of global coal volumes from the bulk market as a result. This caused Newcastle coal futures to increase by more than a third and added strain on coal inventories across Asia. The ban was lifted in February.

“From week five to 11 this year Indonesia exported 62,9 million tonnes of coal, an 11.5% rise compared to the same period last year and only exceeded by 2019 for the highest volumes on record shipped during those weeks,” says Niels Rasmussen, Chief Shipping Analyst at BIMCO

“Since Australia fell out of favour, China has increasingly relied on Indonesian coal. In fact, 65% of all Chinese coal imports in 2021 came from Indonesia,” says Rasmussen.

India, on the other hand, turned to Australia for more coal in 2021, but Indonesia’s coal still made up 35% of the country’s coal imports despite this. 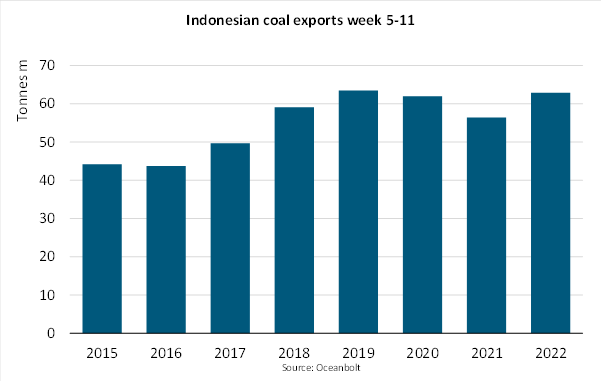 “In the short-term we expect Indonesian exports to remain strong as buyers look to catch up on delayed shipments,” says Rasmussen but adds: “Unfortunately, however, there are rumours that another export ban may come in April or August.”

With India and China importing around 40% of all seaborne coal combined, global coal exports, and in particular Indonesia’s, are very dependent on the two countries’ energy demand.

It will therefore be a concern to some that China has recently announced plans to increase domestic mining capacity by a further 300 million tonnes (equal to recent annual imports) and expects demand to start declining in the second half of this decade.

India is equally looking to expand its domestic capacity but expects annual demand to increase by around 300-500 million tonnes by 2030 which likely cannot be covered without imports.
Source: BIMCO