BIMCO: US Crude Oil Exports to China drop to zero in August

In August, no US seaborne exports of crude oil to China were recorded. A massive change to the export pattern seen since early 2017. Chinese buyers, led by the world’s top tanker charterer Unipec, were rumoured to have stayed away – and new data proves it. Now rumours have it, that Chinese buyers returned in early October, data will eventually show if this is right and to what extent at a later stage.

Despite being left out of the ‘official’ trade war at the last minute, crude oil was removed from the Chinese USD 16 billion list before it came into force on 23 August 2018, crude oil exports are now taking centre stage. BIMCO’s Chief Shipping Analyst Peter Sand comments: “The tanker shipping industry is hurt when distant US crude oil export destinations like China, are swapped for much shorter hauls into the Caribbean and South, North and Central America.

The trade war is all around us now. What appeared on the horizon half a year ago is now impacting many seaborne trading lanes.

All commodities may be impacted regardless of them being officially tariffed or not. What we see in terms of crude oil transport, is harmful to the global shipping industry as well as cumbersome to the exporters and importers of the product.” 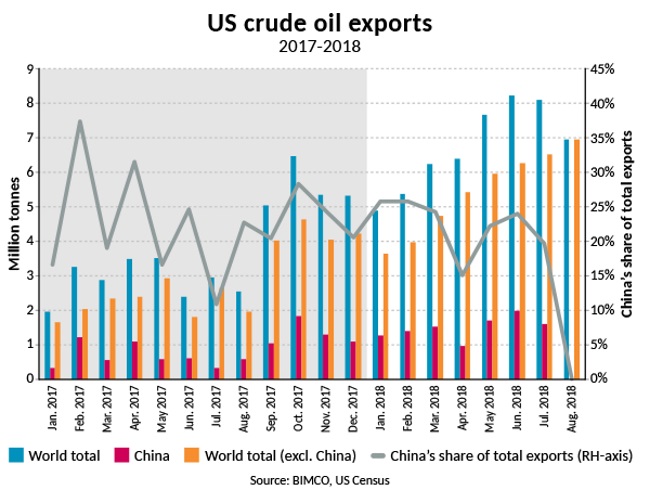 US crude oil exports to any other destination were record high

Exports to Asia jumped in June and July, from a 43% share of total exports since the start of 2017 to reach a 56% share. In August that share fell back to 46%. The two other major importing regions are Europe (26%) and North and Central America (18%), while South America (5%), Caribbean (2%) and Others (4%) make up the rest. (August share of exports in brackets)

Even though volumes were record high, tonne-mile demand dropped by 19% from July to August due to the shift in trade patterns.

Exports to Asia are by far the most important. When measuring the tanker demand in tonnes-miles (TM), exports of US crude oil to Asia generated 70% of TM-demand on that trade in August– down from 78% in June and 75% in July.”
Source: Peter Sand, Chief Shipping Analyst, BIMCO