BIMCO’s Shipping Number of the Week: China’s flight recovery in U-turn with 7,667 daily flights in mid-February

On 16 February, the number of domestic flights in China more than tripled to 7,667 compared with the lows recorded over the Lunar New Year celebrations when daily flight numbers dropped to just 2,000 per day. The February figure testifies however to what appears to be a “new normal” recorded over recent months, and to the fact that the recovery seen throughout the latter half of 2020 is broken.

Despite the jump in flight numbers on 16 February after the Lunar New Year dip, the overall depressed flight activity lowers demand for oil products and therefore, also for the tanker shipping market which at the moment needs all the help it can get.

At the end of the third quarter in 2020, the number of domestic flights in China had recovered to their pre-pandemic levels, although the total number of flights were still lower due to international arrivals remaining depressed. Travel restrictions on international flights were not loosened to the same extent as those on domestic trips during 2020.

Local and regional COVID-19 outbreaks have caused renewed travel restrictions in some regions and a cold spell hitting China at the start of the year has also caused a drop in flight activity, as China finds itself unable to completely shake of the pandemic. Localised travel restrictions in the country will not be lifted immediately, with some already lasting until at least mid-March. 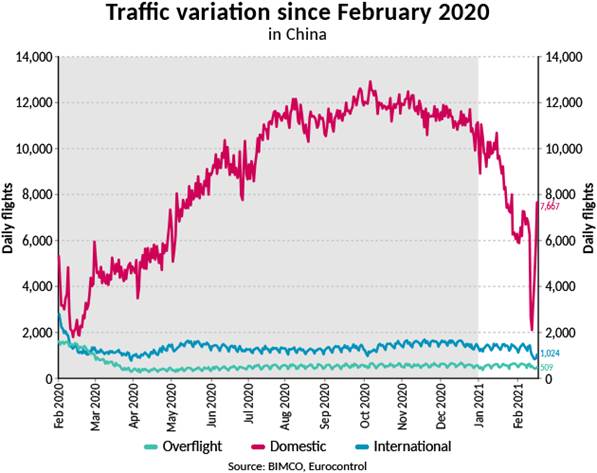 “This new threat to Chinese oil demand shows that even China, widely seen as a success story in combatting the virus, is not immune to another wave. Tough restrictions are quickly put in place when a new local cluster is identified,” says Peter Sand, BIMCO’s Chief Shipping Analyst.

“Adding to this, the large amount of crude oil that China bought during the oil price war in March 2020, which arrived during the summer months, is now being drawn upon, lowering the need for imported crude oil. This adds to the pressure on a tanker market which right now needs all the help it can get,” ends Sand.
Source: BIMCO, Peter Sand, Chief Shipping Analyst