As spot container freight rates entered December, they also entered record-braking territory, climbing from USD 3,076 per FEU on the last day of November to USD 4,858 per FEU on first day of December. This was a milestone in its own way.

Since then, all stars aligned for a continued climb that has seen spot rates break through the USD 6,000 per FEU mark on 15 December, now quoted at USD 6,102 per FEU (on 16 December) (source: Xeneta).

Massive BREXIT frontloading imports and so much more

The massive stop-and-go trade in containerised goods throughout the year has caused significant challenges for logistics providers, including the global liner industry. At the start of the year, the COVID-19 pandemic stalled Asian exports, followed by shut-downs throughout Europe and the US as the pandemic spread. The situation could not get much worse as demand for goods evaporated instantly. 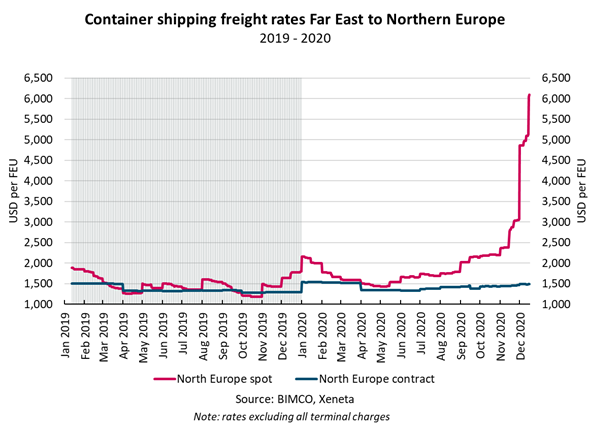 A dreadful first half of 2020 was replaced by a near magical second half in terms of demand, a picture only matched by a real Hans Christian Andersen fairy tale. If you ask the shipping industry.

“As the spot rate on the Far East to North Europe trade lane has climbed almost vertically since mid-November, the red hot spot market also indicates that some cargo is rolled over, as there simply isn’t room for it on the scheduled departures,” says Peter Sand, BIMCO’s Chief Shipping Analyst, and continues:

“This has caused non-liner logistics providers to charter in multi-purpose ships of their own to carry cargo for their most important costumers. This market squeeze will only get solved slowly, as the wheels of global supply chains keep turning, but always at a steady pace.”

“Beyond the logistics, the most important task for the liner industry right now, is to negotiate higher contract rates for future shipments with the large shippers, as they seek to sell forward next years’ capacity at the best possible price,” Sand says, adding:

“Shippers on the other hand may fear that they are left to dry in the red hot spot market if no new long-term volume deals are signed with the liners.”
Source: BIMCO, Peter Sand, Chief Shipping Analyst