The importance of the Blue Economy to Jamaica and the measures being taken by its Government to support its maritime sector were highlighted by the Hon Robert Montague, Jamaica’s Minister of Transport and Mining, during an IMO High Level Symposium, hosted in Montego Bay and attended by IMO Secretary General Kitack Lim.

“The Blue Economy is of particular importance to the Caribbean in light of our dependence on it for income and employment and as a key source of food, energy, health, leisure, trade and transport,” he told the High Level Symposium of Ministers of Transport for the Caribbean region.

He said that for Jamaica, “the ocean is an invaluable resource that is full of potential for economic growth and job creation,” pointing out that Jamaica has jurisdiction over an area of ocean 23 times its land mass.

His words were echoed by Maritime Authority of Jamaica Director General, Rear Admiral (ret’d) Peter Brady who said: “The Blue Economy is the buzz word for marine and maritime interests.”

Brady said: “The maritime world is going through interesting times. One of them, for us in the Caribbean, has been the expansion of the Panama Canal where some great opportunities have been created.”

The Blue Economy concept advocates for a balance between economic growth, improvement of livelihoods and ocean sustainability. Jamaica’s Vision 2030 – National Development Plan, supports the sustainable management and use of environmental resources, including ocean resources. 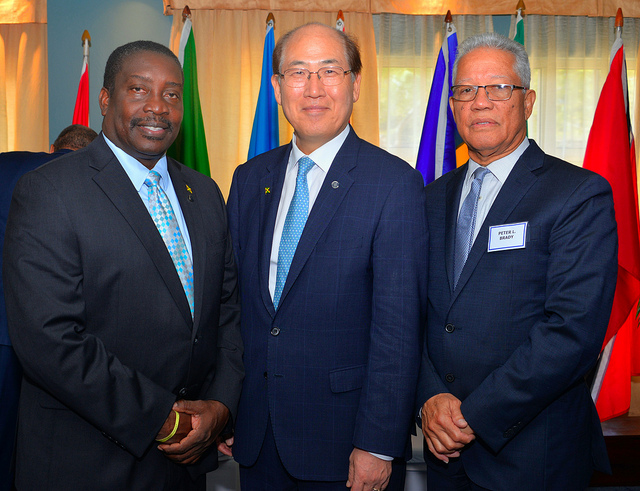 The Maritime Authority of Jamaica is actively pursuing the promulgation of key pieces of maritime legislation, which will strengthen the framework for the protection, response and restoration of the marine environment. The Authority is also currently engaged in consultations with key stakeholders as it embarks on the revision of the National Transport policy which will promote environmentally sustainable maritime transport. This is particularly relevant as the global economy is fuelled by maritime trade and there is no challenge to the reality that 90% of world trade goes by sea, and as the Minister told delegates “In the case of Jamaica, trade by sea exceeds 90% of total trade and arguably more than 70% of the value of our trade.”

He pointed out that “a significant number of our people” depend on the Blue Economy for their livelihoods, which includes the cruise industry, tourism, inter-island transportation of passengers and goods, as well as exploited and potential oil and gas reserves.

He commented: “When one adds the fact that the Caribbean region is the world’s premier cruise ship destination; that about 33% of world crude oil passes through the region; and 30% of world maritime trade transits our region; we owe it to our people, to preserve and protect it, but also to make it safe.”

“We have entrusted to our maritime administrations, the regulatory oversight and responsibility for safe, secure, efficient and environmentally clean shipping within our respective States,” the Minister said.

Admiral Brady thanked the portfolio Ministers, on behalf of all Maritime Administrations, for coming together to examine some of the challenges which come with shipping and its regulations, and for working together to provide the policy direction and guidance which is needed to ensure right and proper ocean governance over the coming years.
Source: Maritime Authority of Jamaica