One of the great stories of the Bible’s New Testament centres on the feeding of a multitude of 5,000 with just five loaves and two small fish. Shipping also has a notable 5,000 to feed in the form of the containership fleet. In this case, the feat has not only been continually finding enough cargo for the fleet to carry but also generating more capacity across a similar number of ships as time has gone by. 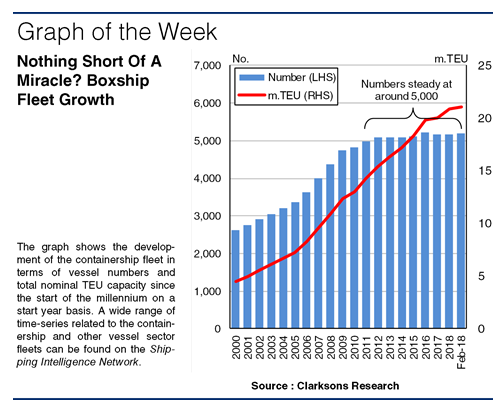 Today the containership fleet stands at 5,192 units, a pretty impressive number considering that it stood just 2,617-strong at the start of the millennium. It passed the 4,000 vessel mark during 2007 and the 5,000 vessel barrier soon after in 2011. However the containership fleet has been stuck around 5,000 units for some time now. 2017 saw just 8 vessels added in net terms to the fleet. In fact, compared to the boxship fleet at the start of 2012, the fleet today is only 109 vessels larger, even though an overall total of 5.6 million TEU (nominal) capacity has been added to the fleet over the same period. During that time, vessel numbers have grown by 2% whilst capacity has grown by 37%.

Of course, even if the numbers haven’t grown much, the 5,000 ships still need to be fed with plenty of cargo. A global trade volume that totalled 67m TEU back in 2000 hit 192m TEU in 2017 (a CAGR of 6.4% in that period) and has grown quickly enough to allow the fleet to get that large. Meanwhile, in recent years, ‘The 5,000’ has pulled off the trick of moving more and more cargo each year. The 5,083 ships at start 2012 moved 155m TEU that year but then, in 2017, a figure of 5,159 ships moved a global volume 24% larger. That’s an impressive feat. Of course, it couldn’t happen without an increase in capacity; that’s crucial. Capacity, if not the actual number of ships, has grown rapidly, and the constancy of ‘The 5,000’ is of course in part illusory. Within the fleet there have been major dynamics with bigger new ships (as large as c.21,000 TEU) joining the fleet and older, smaller ships exiting.

How It Was Done

This dynamic has become extremely pronounced in recent years with deliveries over 1m TEU in 9 of the last 10 years (average size in 2017: 7,731 TEU) and record levels of recycling in 2016 followed by 0.4m TEU in 2017 (average size: 2,822 TEU). Despite a static fleet in unit terms, that’s where the capacity has come from, along with the ‘fungibility’ of boxships allowing the ‘cascade’ of larger ships down onto trades previously served by smaller vessels in many cases.

More To Go Around?

In the near-term, box shipping might be able to repeat the trick. There are 383 units (2.7m TEU) on order and in the last two years 335 were recycled, so ship numbers might not change too much, even as capacity grows further. The wider debate surrounds the future of the current big ship-led model; new trades have opened up to larger ships but maybe the next big efficiency gains in liner shipping (especially considering 3D printing and potential changes in manufacturing locations) might necessitate a network that has to rethink the role of smaller ships too. Time for another modern miracle?
Source: Clarksons