BP Plc ran its oil refineries at the hardest rate in 15 years during the third quarter, racing to profit from unusually cheap Canadian crude.

The British oil major said its refining business — or downstream — delivered adjusted profit before interest and taxes of $2.11 billion in the third quarter, up from $1.46 billion during the second quarter. Much of the increase came from “higher North American heavy crude oil discounts,” BP said. The company said that its trading unit, one of the largest in the industry, also delivered better results than in the second quarter.

BP is able to profit from cheaper Canadian crude better than its rivals since it spent $4 billion in 2012 and 2013 to overhaul its largest refinery, located in the outskirts of Chicago, to process low quality crude that arrives directly via pipeline from Canada. Whiting refinery can now run on a diet of 85 percent low quality Canadian crude, compared with 20 percent before. 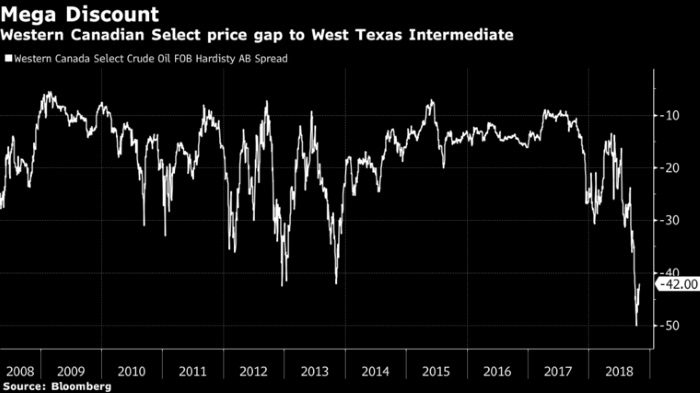 Western Canadian Select crude traded at a discount of about $28 a barrel to benchmark West Texas Intermediate crude during the third quarter, compared with $10.50 a barrel in the same period of last year. Booming production north of the border overwhelmed pipeline capacity and the discount widened to a record of $52.4 a barrel in early October.

The WCS-WTI average price gap between July and September was the second widest for any quarter, only trailing the $31.20 a barrel gap of the fourth quarter of 2013, according to data compiled by Bloomberg.

BP said its refineries ran at a utilization rate of 96.3 percent during the third quarter, the highest since 2003. Traditionally, oil companies struggle to run their refineries at more than 90-95 percent at any given time as some units are always down due to planned maintenance and outages.

BP started maintenance on Whiting, about 17 miles southeast of downtown Chicago, in mid-September. The plant, with a capacity to process 413,500 barrels a day, is the largest inland refinery in the U.S. The company plans to wrap up the work in early November.
Source: Bloomberg

2018-10-31
hellenicshippingnews..
Previous: Dollar at 16-month high as strong U.S. data supports
Next: How oil & gas Majors can scale in renewables