• Operating performance was resilient in the second quarter with four major project* start-ups, strong momentum in the customers business, including material growth in convenience gross margin*, and delivery of $2.5 billion of cash costs* savings on a run-rate basis relative to 2019, around six months earlier than targeted.
• Reported profit for the quarter was $3.1 billion, compared with $4.7 billion for the first quarter 2021.
• Underlying replacement cost profit* was $2.8 billion, compared with $2.6 billion for the previous quarter. This result was driven by higher oil prices and margins offset by a lower result in gas marketing and trading.
• Operating cash flow* of $5.4 billion includes $1.2 billion pre-tax of Gulf of Mexico oil spill payments within a working capital* build of $0.5 billion (after adjusting for inventory holding gains and fair value accounting effects).
• Net debt* fell to $32.7 billion at the end of the second quarter.
• Following the annual review of price assumptions used for investment appraisal and value-in-use impairment testing, bp’s Brent oil price assumption to 2030 is increased to reflect expected supply constraints, while longer-term assumptions are lowered as bp expects an acceleration of the pace of transition to a low carbon economy.
• As a result of these changed assumptions, the reported result includes a pre-tax net impairment reversal of $3.0 billion. 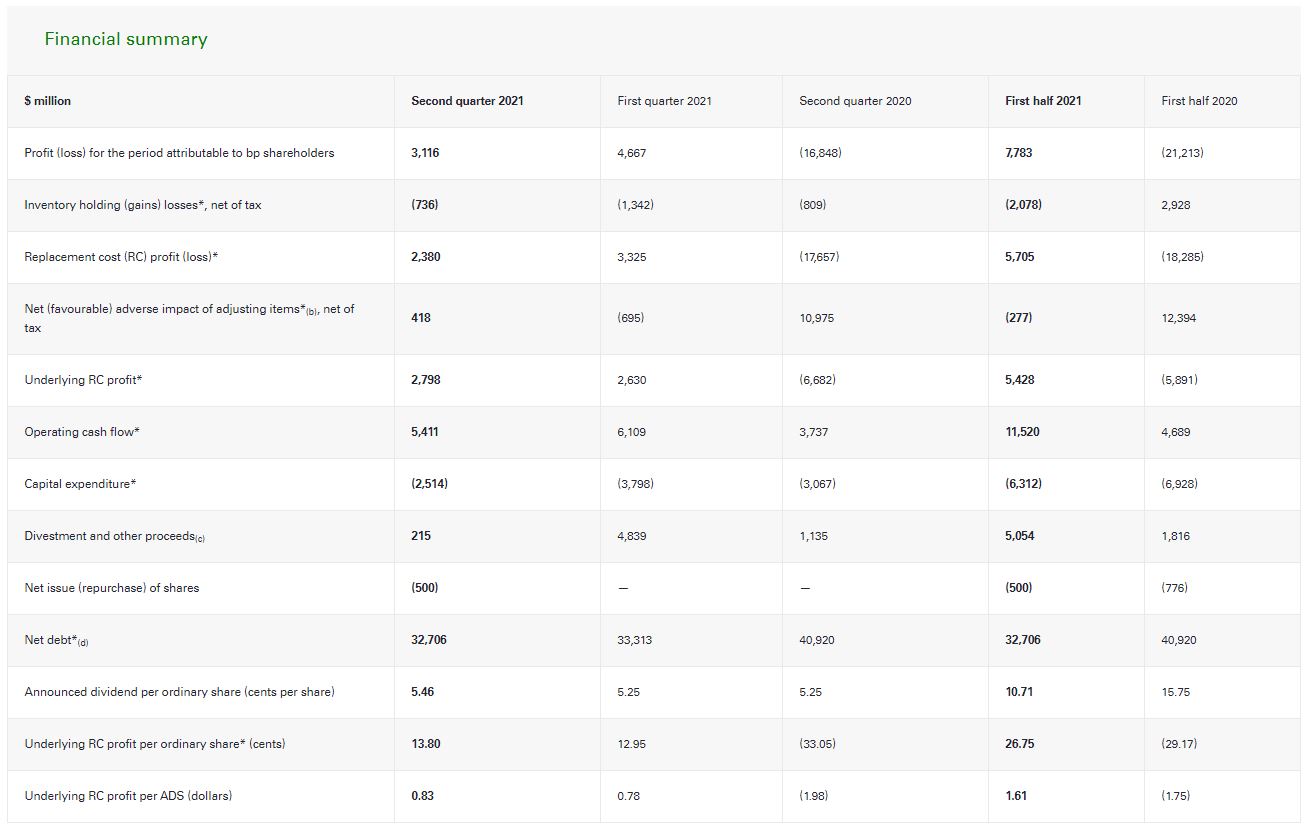 • A resilient dividend is bp’s first priority within its disciplined financial frame.
• Reflecting the underlying performance of the business, an improving outlook for the environment, confidence in our balance sheet and commencement of the share buyback programme, the board has announced an increase in the second quarter dividend of 4% to 5.46 cents per ordinary share. This increase is accommodated within a 2021-5 average cash balance point* of around $40 per barrel Brent, $11 per barrel RMM and $3 per mmBtu Henry Hub (all 2020 real).
• bp generated surplus cash flow* of $0.7 billion in the second quarter and $2.4 billion in the first half after having reached its net debt target of $35 billion. Taking into account surplus cash flow* generated in the first half of the year, bp intends to execute a share buyback of $1.4 billion prior to announcing its third quarter 2021 results. For 2021, and subject to maintaining a strong investment grade credit rating, the board remains committed to using 60% of surplus cash flow for share buybacks and plans to allocate the remaining 40% to continue strengthening the balance sheet.
• On average, based on bp’s current forecasts, at around $60 per barrel Brent and subject to the board’s discretion each quarter, bp expects to be able to deliver buybacks of around $1.0 billion per quarter and have capacity for an annual increase in the dividend per ordinary share of around 4%, through 2025. Other elements of the financial frame are unchanged.
• The board will take into account factors including the cumulative level of and outlook for surplus cash flow, the cash balance point and the maintenance of a strong investment grade credit rating in setting the dividend per ordinary share and the buyback each quarter.
• bp expects to outline plans for the fourth-quarter share buyback at the time of its third quarter results.

Strong progress in our transformation to an integrated energy company

• Since outlining its new strategy a year ago, bp has made strong progress in its transformation to an IEC. It has delivered 8 major projects*, built a 21GW renewable pipeline, grown convenience and electrification, reorganized, reached over $10 billion of divestment proceeds, strengthened the financial frame and begun share buybacks.
• Four major projects began production in the second quarter – in India, Egypt, Angola and the Gulf of Mexico.
• bp has continued to significantly expand its renewables pipeline, buying a 9GW solar development pipeline in the US. Lightsource bp also continued to expand, growing in Portugal, Spain, Greece and Australia. bp confirmed its intention to bid for offshore wind leases in Scotland with EnBW and in Norway with Statkraft and Aker.
• bp opened the UK’s first fleet-dedicated EV rapid charging hub in London, the first of a series intended for cities across Europe. In the US, bp agreed to take full ownership of the Thorntons business, which is expected to complete in the third quarter of 2021, positioning bp to be a leading convenience operator in the Midwest US.
We are a year into executing bp’s strategy to become an integrated energy company and are making good progress – delivering another quarter of strong performance while investing for the future in a disciplined way. Based on the underlying performance of our business, an improving outlook for the environment and confidence in our balance sheet, we are increasing our resilient dividend by 4% per ordinary share and in addition, we are commencing a buyback of $1.4 billion from first half surplus cash flow. On average at around $60 per barrel, we expect to be able to deliver buybacks of around $1.0 billion per quarter and to have capacity for an annual increase in the dividend per ordinary share of around 4%, through 2025. This shows we continue to perform while transforming bp – generating value for our shareholders today while we transition the company for the future.
Bernard Looney,chief executive officer

(a) This results announcement also represents bp’s half-yearly financial report (see page 16).
(b) Prior to 2021 adjusting items were reported under two different headings – non-operating items and fair value accounting effects*. See page 32 for more information.
(c) Divestment proceeds are disposal proceeds as per the condensed group cash flow statement. Other proceeds were $675 million from the sale of a 49% interest in a controlled affiliate holding certain refined product and crude logistics assets onshore US in the first quarter and first half 2021 and $455 million in relation to TANAP pipeline refinancing in the second quarter and first half 2020. There are no other proceeds in the second quarter 2021.
(d) See Note 9 for more information.