Brazil likely fell into recession in the second quarter according to a key gauge of economic activity that comes as policy makers grapple with high unemployment and weak investments as well as a global slowdown.

The country’s economy activity index, which is a proxy for gross domestic product, fell 0.13% in the April-June period compared to the first three months of the year, according to a central bank release on Monday. A separate publication showed analysts cut their 2019 year-end key rate estimates to 5% while also trimming their growth forecast for this year to 0.81%. 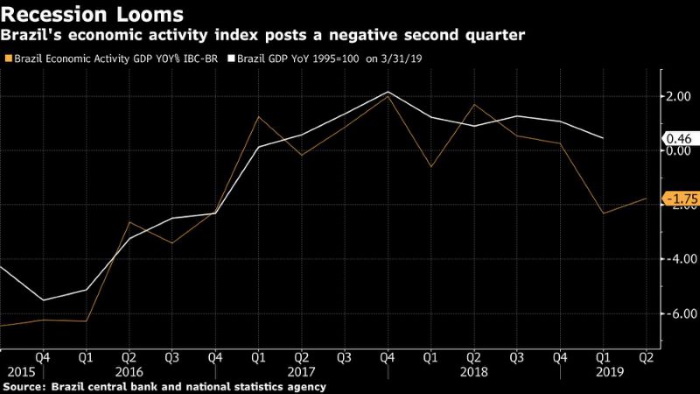 Brazil’s growth has been undercut by feeble consumer demand, uneven business confidence and a weakening global economy. President Jair Bolsonaro’s administration has announced plans to counter the slowdown by giving workers access to cash from a severance fund, while the central bank last month cut its benchmark interest rate and signaled more reductions are on the way. Still, fresh pressure on the exchange rate may affect the extent of the easing cycle.

“The result does not change the overall picture of sluggish growth and ample economic slack, which is the main reason why the central bank engaged in a new round of monetary easing,” said Adriana Dupita, Latin America economist for Bloomberg Economics. “For now, we see the Selic at 5.5% at year-end, with risks tilted to the downside depending on how the real behaves in coming weeks.”

Brazil’s real has fallen 2.7% since the central bank’s last policy meeting on July 31 amid an escalation in the U.S.-China trade war and also Sunday’s shock primary election result in Argentina. A weaker currency can fuel future inflationary pressures by making imports more expensive.

Bolsonaro assumed the presidency in January amid pledges to jumpstart growth by reforming Brazil’s bloated pension system, controlling debt and luring investments. To help reach those goals, he enlisted the help of a pro-market team led by Economy Minister Paulo Guedes.

Still, the country’s services sector fell the most in nearly a year in June, according to the national statistics agency, which also showed that retail sales were negative in the second quarter. Tepid demand has helped to keep Brazil’s consumer prices under control, as the country posted the slowest inflation for the month of July since 2014.