Brazilian soya bean exports reached an all-time high for a first quarter, jumping to nearly 18 million tonnes in sharp contrast to the slow start of the year. While year on year soya bean exports fell 14% in the first two months, 11.6 million tonnes were exported in March, sending total exports for the quarter into record breaking territory with volumes now up 13.7% compared to Q1 2019.

In the first quarter, 80% of the exports went to China (13.3 million tonnes), a level matching annual soya bean volumes from Brazil to China over recent years (78.3% in 2019 and 82.3% in 2018). This leaves no signs that China has been shunning Brazilian soya beans in favour of those from the US to meets its Phase One trade agreement commitments. Although the US exports most of its soya beans in the fourth quarter of the year due to seasonality, for China to have any chance of meeting its commitments, it would already now have to favour US soya beans over their Brazilian counterparts. However, the large Brazilian harvest this season means that not only is the supply of Brazilian soya bean higher than that from the US, the price is also lower. 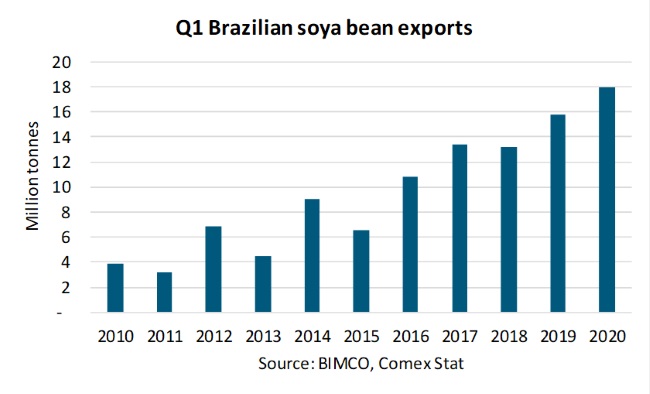 The strong Brazilian soya bean exports have supported freight rates in the panamax and supramax sectors, as these are the primary carriers of soya beans, strengthening the rates in March. Panamax rates reached their highest level of the year on 6 March 2020 at USD 9,610 per day and supramax rates peaked a few weeks later on 18 March 2020 at USD 8,304 dollars per day. Rates for these vessel sizes have since declined to USD 7,380 and USD 4,612 per day respectively on 15 April 2019.
Source: BIMCO

2020-04-17
hellenicshippingnews.
Previous: Low Carbon Shipping Outlook Suggests Industry Will Need to Do More to Meet GHG Targets
Next: Tanker rates will hit the roof if producers outside OPEC+ fail to curb output in 2Q20