Home / Stock Market News / Breaking down G10 valuation: the key is in the terms of trade

Breaking down G10 valuation: the key is in the terms of trade

Our BEER model
The recent increase in G10 FX volatility and dollar strength has raised questions about whether some currencies have reached more stretched levels of mis-valuation. Our approach to look at medium-term valuation is based on stripping out the shorter-term, market-related factors (such as interest rate differentials) and focusing on the economic fundamentals.

Our Behavioural Equilibrium Exchange Rate (BEER) model estimates the real medium-term fair value of G10 currencies using productivity, terms of trades (the price of exports divided by the price of imports), current account balances (as % of GDP) and government spending (as % of GDP). All raw data is from the OECD.

Historically, our model has proven to have a good explanatory power (R-squared around 0.55-0.80 across different G10 pairs) and the terms of trade has, on average, been the factor explaining most of the currency dynamics. The chart below shows the average contributions to the changes in the BEER fair value model in the G10 space. Changes in terms of trade normally account for nearly half of the change in medium-term fair value of a currency pair, government spending and productivity combined normally account for the other half, while current account differentials tend to have quite a small contribution. 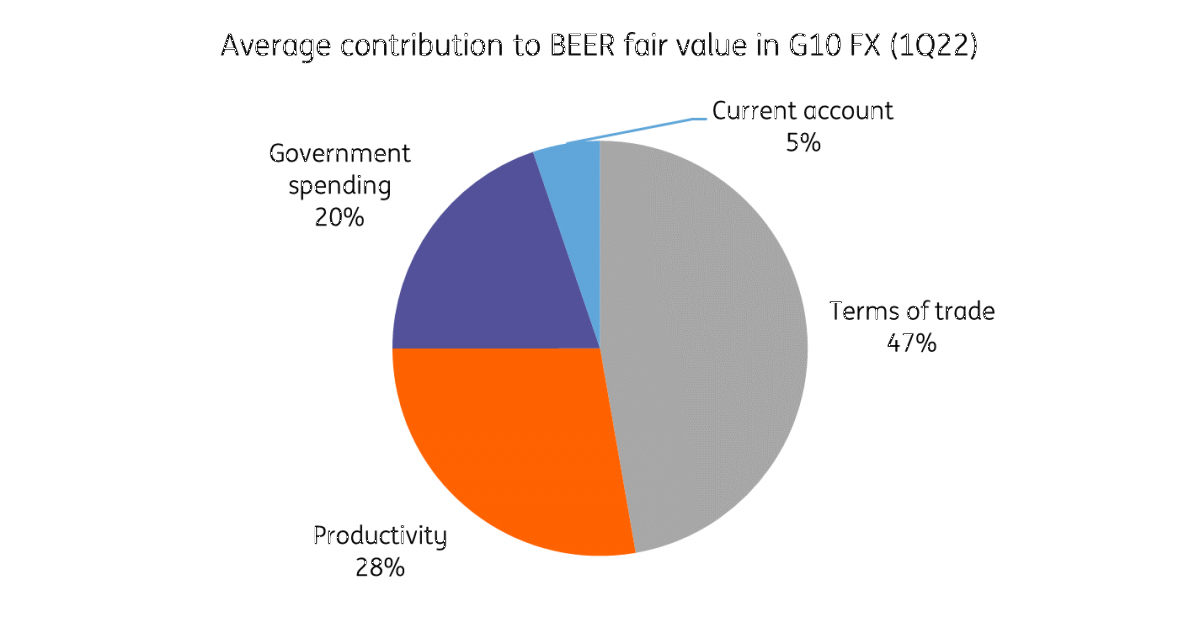 Terms of trade shocks have created divergence in G10 FX

The Ukraine conflict and the exacerbated surge in energy prices have generated some significant shocks in the terms of trade of many G10 economies lately. In the chart below, we show how the terms of trade have developed since 2010.

Commodity-exporting countries have seen a substantial improvement in their terms of trade position since the start of 2021, ultimately more than offsetting the pandemic-induced slump of 2020.

The US stands out in the top half of the chart – which is otherwise populated by commodity-exporting countries – as the recent increase in oil prices generated an improvement in the US terms of trade. In our view, this is one of the reasons behind the strong dollar environment. Barring a substantial contraction in energy prices in the coming quarters, this means that the dollar will continue to draw some benefits from its trade position.

The opposite has happened to European countries (excluding Norway), and to Japan, which have all seen a deterioration in their terms of trade positions in the past year or so, largely due to the sharp increase in energy prices – given that those countries are all net importers of energy.

Our results: EUR/USD is not cheap

The chart below summarises our results for medium-term real mis-valuation of G10 currencies versus the dollar. The lime-coloured columns indicate the 1.5 standard deviation bands: mis-valuation levels outside of those bands would be considered overstretched, so with a higher probability of convergence to their fair value in the medium term. 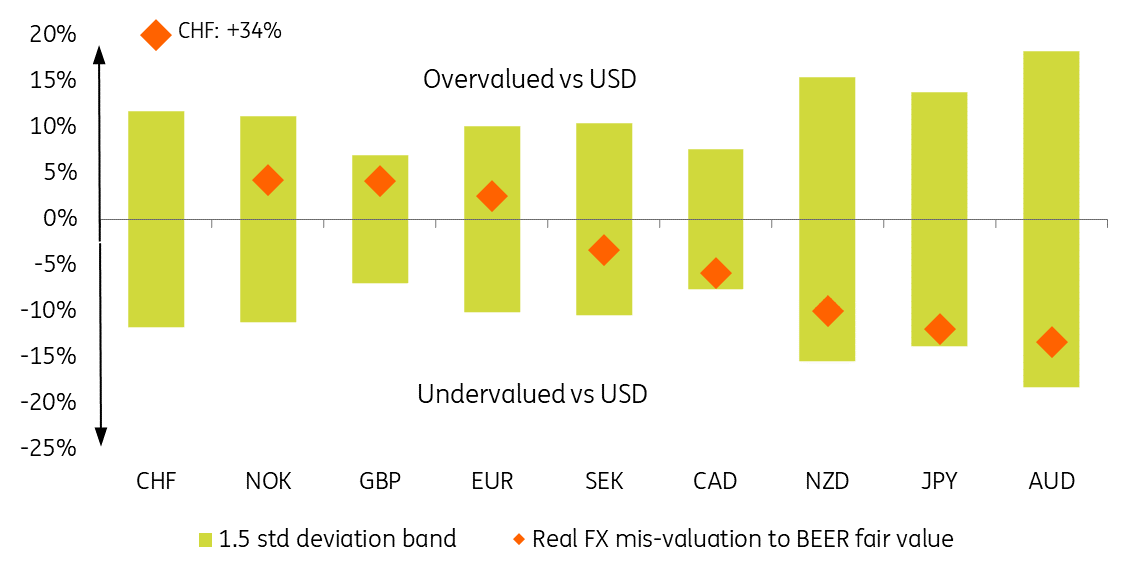 The Swiss franc remains obviously the most overvalued currency in the G10 space, while NOK, GBP, EUR and SEK are broadly in line with their medium-term fair value (less than 5% mis-valuation). The $-bloc and JPY are instead quite undervalued against the dollar.
EUR/USD is not cheap when medium-term economic fundamentals are taken into account. As shown below, it is once again mostly a terms of trade story. For EUR/USD fair value to significantly bounce back we’d need to see a recovery in the eurozone terms of trade: in other words, a significant cooling off in energy prices, returning to around the levels seen in the first half of 2021. We think this is unlikely to happen in the next year given the tectonic shift in geopolitical equilibriums.

The BEER model results suggest – in our view – that any EUR/USD recovery in the coming quarters should be quite gradual, as economic fundamentals should not support a much stronger euro in the foreseeable future. We expect a return to 1.15 only towards the end of 2023.

Incidentally, these results suggest the euro would not find much resistance in a potential move to parity over the coming months.
Terms of trade shock has driven EUR/USD fair value lower

Japan’s terms of trade faced a bigger negative shock than the eurozone’s, but JPY is showing a stretched undervaluation. The main reason is that – unlike EUR/USD – terms of trade are not the major determinant of USD/JPY movements in the medium term, while productivity and government consumption have larger weights. The proximity to the lower-bound of the mis-valuation band tends to indicate more limited upside risk for USD/JPY from now on.

When it comes to AUD, CAD and NZD, we think the current undervaluation – once again, driven by the terms of trade factor – helps to build a case for a recovery in the medium term. We think CAD is in a better position due to solid growth, commodity exposure, and domestic monetary tightening, while the outlook for the Australian and Kiwi economies (by extension, their currencies) is heavily tied to the Chinese growth picture, which remains uncertain given the recent lockdowns. In other words, CAD may converge to its fair value earlier than AUD and NZD.
Source: ING