Bringing the vision to life with hi-tech

As the Port of Singapore’s next-gen ambitions continue to manifest with the construction of Tuas Mega-Terminal, a combination of technologies and innovations are called for to increase efficiency and safety of operations at the world’s busiest container transhipment hub.

Wärtsilä has responded to this call by opening up a Wärtsilä Acceleration Centre (WAC) in the city-state with the sole ambition of fostering more innovation in the local marine ecosystem.

Through collaboration with local partners, industry and academia, Wärtsilä aims to raise the bar in maritime by co-creating tailored, leading-edge and commercially-viable hi-tech solutions to boost, as one example, safety within the bustling harbour environment.

The Maritime and Port Authority of Singapore (MPA) and Wärtsilä have agreed to jointly focus on the development of intelligent vessels, connected smart port operations, cyber-physical security, and digital acceleration with start-ups.

The first project to be co-produced at the Centre is the Wärtsilä IntelliTug. By partnering with PSA Marine and MPA, Wärtsilä has embarked on a venture to enhance the capabilities of the harbour tug.

With more than 90,000 towage jobs in each year, the PSA Marine tug operations are an important lifeline for Singapore. To meet the demands of the evolving port, the collective is collaborating to bring to life a smarter tug that will perform a range of routine missions designed to further improve tug safety and efficiencies, while reducing operator workload and pressures in one of the world’s most demanding harbour environments.

We are always scouting for innovative ideas to enhance our Tug Masters’ situational awareness so that they can navigate the busy port waters in Singapore more safely. To achieve this objective, we have teamed up with MPA and Wärtsilä to explore and testbed new technologies, turning ideas into reality.
Peter Chew, Managing Director of PSA Marine

By combining Wärtsilä’s Smart Marine capabilities with PSA Marine’s wealth of experience and expert knowledge, we’re bringing to life the intelligent tug of the future. This is a testament to the partnership potential between man and machine, whereby the Tug Master’s situational awareness can be greatly enhanced.

This tug boasts a combination of world-leading technologies, all integrated in a light-weight, human-centric smart navigation system.

In contrast to many existing conceptual ideas in the industry, with IntelliTug we are creating a technology that will find a real application in the commercial maritime market. We want to help the industry improve by leveraging the use of automation technologies on ships to boost safety and efficiency, while at the same time augmenting the human’s role within the loop. This solution will empower Tug Masters by actively assisting the crew in different situations, allowing them to focus on critical tug operations whilst dynamically maintaining safe distances during navigation and preventing potential collisions.
Marco Ryan, Chief Digital Officer and Executive Vice President, Wärtsilä Corporation

The Intelligent Tug of the Future
Interview with Bernard Wong, Head of Fleet Management at PSA Marine and Chris Chung, Director of Digital Innovation and Strategic Projects at Wärtsilä 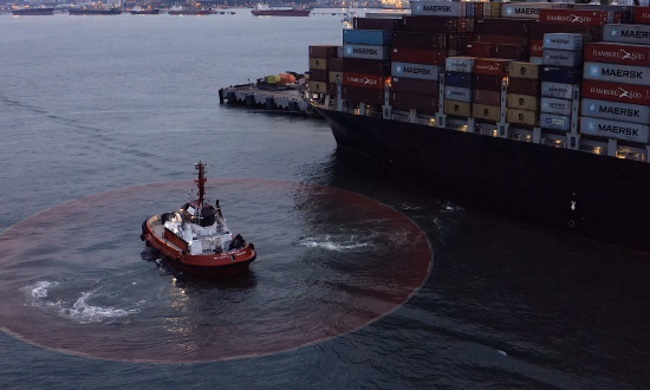 The sensor fusion technology behind the IntelliTug will also provide the crew with an extra set of eyes, enhancing situational awareness and improving visibility in challenging conditions.

Virtual Anchoring will help to relieve the Tug Master from executing manual standby manoeuvres, making it possible for the master and his crew to focus on other tasks at hand. The Guard Circle will alert the Tug Master should anything enter his safe zone.
Source: Wärtsilä

2019-04-15
hellenicshippingnews..
Previous: High water on US Mississippi river reducing ship traffic
Next: Coal’s Collapse Crowns Winners and Losers From China to the U.S.