So much for Britannia ruling the waves.

U.K. Prime Minister Theresa May will spend her last days in office working out how to secure the release of the Stena Impero, a British-flagged oil-products tanker seized by Iran in the Strait of Hormuz last week.

Amid the likely handover of power to former Foreign Secretary Boris Johnson, and just over three months before the U.K. is due to exit the European Union, the incident looks like a disastrous miscalculation by a political class that’s had its share of poor decision-making.

Indeed, an ill-planned military operation in a vital global shipping lane and a mistaken gamble on Washington’s response looks oddly reminiscent of the Suez crisis – the disastrous 1956 episode that marked the end of Britain’s ambitions as a global power.

The most baffling thing about this incident is how entirely predictable it’s been.

Tehran has been operating a calibrated tit-for-tat strategy in the Persian Gulf ever since the situation in the Strait of Hormuz started to deteriorate this summer. Within hours of the U.K. seizing a tanker carrying Iranian oil near Gibraltar earlier this month, a senior official in Tehran was calling for retaliation. 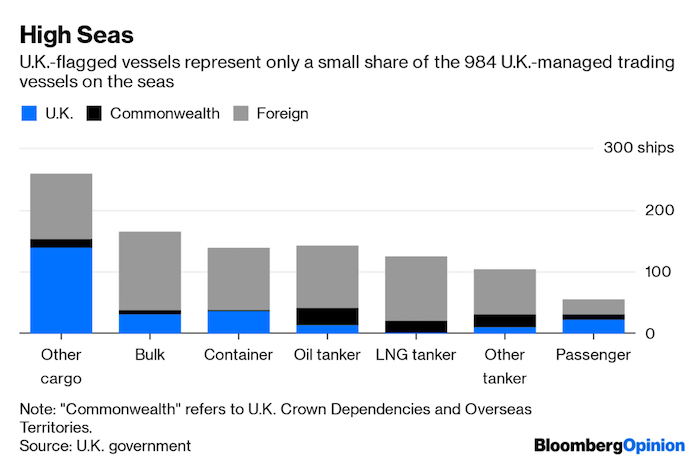 Given the relative ease with which Iran can control shipping through the Strait (a fact the country’s foreign minister Mohammad Javad Zarif highlighted in an interview last week with Bloomberg Television), the current situation was all but inevitable, as my colleague Julian Lee has written.

What happens if Tehran decides that honor isn’t yet satisfied? May’s government lacks the firepower to prevent further attacks: There’s just a single frigate, the HMS Montrose, currently in the region. Two more ships, HMS Duncan and HMS Kent, are to be rotated through the Gulf over the course of this year. But at best two boats will be available to escort marine traffic – or one when Montrose is docked.

That’s plainly inadequate to protect a merchant fleet that numbers close to 1,000 trading vessels, once you throw in U.K.-owned ships sailing under the flags of other countries. Tankers likely to transit Hormuz comprise about a third of that total.(1)

It defies logic that the U.K. got into this mess without being aware of how events would play out – but much about the U.K. these days defies logic.

The country’s civil service surely would have warned the Cabinet that the Gibraltar operation, however legitimate, would risk a blowback Westminster couldn’t contain. Looking the other way to avert an international incident is a time-honored practice of governments adjacent to global shipping lanes, one that Spain appears to have employed in this situation.

Whether Westminster decided to intervene out of an abundance of duty or the expectation Washington would offer its far larger Persian Gulf force for protection as repayment, the government clearly acted without a secure back-up plan. The fact that the crisis has played against the backdrop of the messy resignation of Westminster’s ambassador to Washington, Kim Darroch, couldn’t have helped matters, either.

To be sure, the existence of diplomatic ties between Iran and the U.K. should, in theory, make resolving this incident a little easier than a comparable blow-up with the U.S. Even there, though, it’s not clear that London has much leverage these days. Relations now are almost certainly worse than they were in 2007, when it took nearly two weeks to secure the release of 15 Royal Navy personnel captured in an area disputed between Iran and Iraq. British-Iranian woman Nazanin Zaghari-Ratcliffe has been imprisoned in the country for more than three years, in a lingering dispute where the intervention of Britain’s likely future prime minister has been less than helpful.

As with Suez, which gave cover for the Soviet Union to send tanks to crush Hungary’s 1956 revolution, the bigger risk isn’t so much the blow to Britain’s standing in the world, as international relations more broadly. 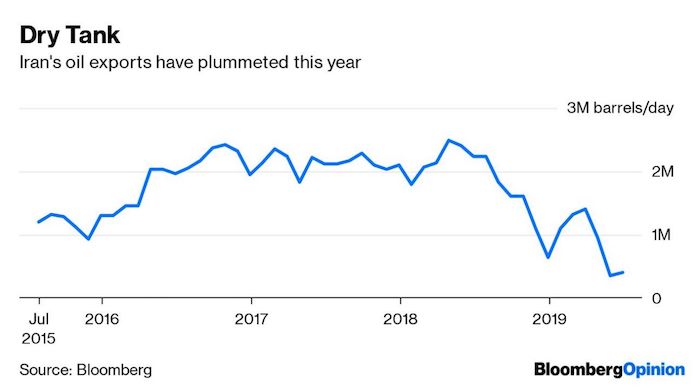 With Iranian oil exports bumping along around their lowest levels since the 1980s, Tehran’s desire to stay on good terms with the remaining parties to the Joint Comprehensive Plan of Action on its nuclear program is one of the main factors preventing the situation in Hormuz deteriorating further. That’s markedly weakened now that the Stena Impero situation has put it on a collision course with a second member, after the U.S., of the six-nation group.

As we’ve argued before, the situation in Hormuz is a good deal more fragile than you’d think just from looking at somnolent crude prices. A crucial passage for the world’s oil flows has been a tinderbox for months. It’s no place for Britain, in its current weakened state, to be caught playing with matches.

(1) Maritime lawyers might quibble that Iran should only have a problem with boats sailing under the British flag, but the fact that it also stopped the British-operated, Liberian-registered Mesdar last week suggests Tehran is acting as if all is fair in love and war.
Source: Bloomberg

2019-07-24
hellenicshippingnews..
Previous: Building good maritime security in the South Pacific
Next: Why More LNG-Powered Cruise Ships Are Being Built