Home / Commodities / Commodity News / Build or buy: are the copper Majors rising to the growth challenge?

Build or buy: are the copper Majors rising to the growth challenge?

Demand for copper — already on a rising trend — is arguably set to explode as the energy transition takes hold. In order to prevent structural deficits, unsustainably high prices and demand destruction, miners will have to invest ever-increasing sums of money in supply. In the last article in this series I highlighted the scale of the challenge ahead. Now I’ll look a little closer and ask: are the copper Majors doing enough to address the issue? And who are the likely winners and losers in the growth race?

As anyone familiar with copper mining knows, grade decline and attrition is a constant issue. The industry has to continually replenish supply just to maintain output. Add to that the impact of increased demand and the need for investment quickly accumulates.

To meet our base case demand and counter grade decline and depletions over the next ten years, we estimate the industry will need to commit around an additional US$130 bn to deliver a further 6.5 million tonnes of copper supply per year (Mt/a). Adopting a two-degree climate change pathway — our Accelerated Energy Transition Scenario -2 (AET-2) — would add around a further 9 Mt/a by 2030, taking the total investment requirement to an eye-watering US$325 bn.

Is this achievable? Clearly it would stretch investor appetite and corporate financing capability, potentially to breaking point. Given lead times, investment needs to be mobilised in the next two to three years – and even this won’t prevent market shortages mid-decade, which are essentially ‘baked in’ due to insufficient elasticity of supply.

Is there a shortage of copper projects?

The 17 Mt of identified projects available to be green-lighted may seem more than enough to meet demand. However, many projects are in risky jurisdictions, with complicated geology and construction, ever-more-stringent ESG requirements and lower than ideal internal rates of return: not the usual hunting grounds of the copper Majors, who tend to prefer the richer pickings of low-risk jurisdictions and long-life, low-cost assets.

These issues notwithstanding, the challenge of meeting demand largely comes down to timing. The market and the wider industry looks to the major copper miners to take the lead in sanctioning projects and the expression of confidence in new markets that this projects. That they have been in no rush to develop projects is perhaps surprising, given their own assertions that the energy transition is a one-way ticket to the stars.

How are the copper Majors performing on market share?

Basically, the copper Majors are not even treading water in terms of market share. We classify a Major as an entity that owns at least 500 kilotonnes per year (kt/a), or could produce in excess of 500 kt/a of mined copper through base case and potential expansions, whether committed or not. There are 13 entities that meet these criteria and collectively they accounted for nearly 10 Mt/a of copper production in 2020, for a global market share of 47%.

However, the major copper producers will collectively experience a net decline in output of 800 kt/a by 2030, without further project development. Set against an increase in market demand of around 6 Mt/a, this means the Majors’ collective market share will decline to just 34% (assuming no further projects are sanctioned). The situation will become acute by 2040 when, without further investment, the ‘Big 13’ copper Majors’ output will decline to 7 Mt/a, or less than 25% of global output. 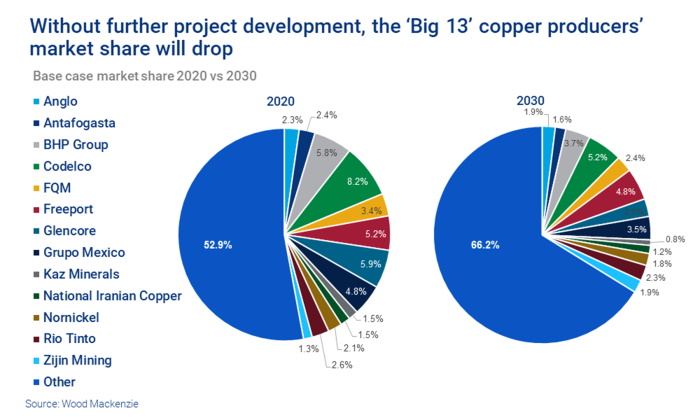 Can the copper Majors arrest the decline in their output?

Collectively, the Majors own equity in as-yet-unsanctioned projects with an attributable output of 7 Mt/a that could potentially be brought online by 2030. Enough in theory to cover booming energy transition demand and raise market share – but only under a 3-degree base case outlook. And many projects will fall by the wayside, while others will be delayed or deferred.

We believe it is highly unlikely that a significant proportion will be green-lighted to come on stream in the second half of the decade. Those that are will almost certainly take longer than estimated to deliver, given there will be myriad mine projects for energy transition commodities competing for project delivery resources. 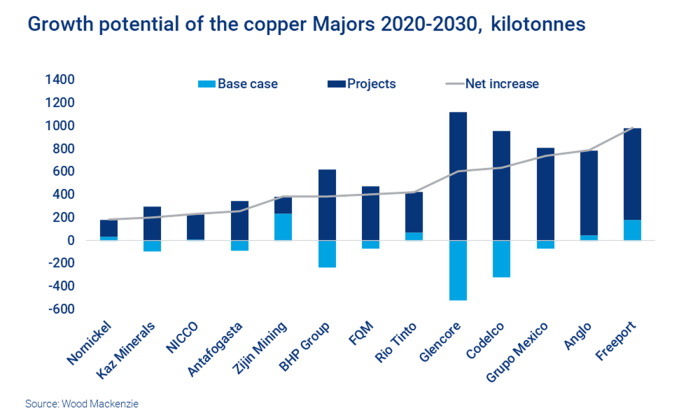 Winners and losers in the growth race

Assuming all the probable and possible projects in their portfolios are sanctioned, Freeport-McMoRan Inc. and Anglo American plc stand out as having the largest net growth potential at around 1 Mt/a and 0.8 Mt/a respectively, with each company increasing their market share by 2.5 percentage points by 2030.

Grupo México (including SPCC) claims ownership of the largest reserves in the industry, and also has the potential to raise its production by around 0.8 Mt/a, equivalent to an increase in market share of just over 1.7 percentage points.

Glencore plc has the largest potential project-based growth of around 1.1 Mt/a but will suffer from a significant drop-off in base supply of -0.5 Mt/a over the period: as a result its potential market share only rises by one percentage point.

Other major producers’ increases in market share will each be less than one percentage point — hardly a land grab. This begs the question: where is the growth to match the ambitious increase in demand projected by many of the same producers? With one or two exceptions, there is a mismatch between copper’s green growth story and actual ’boots on the ground’ project development.

Could boards become heroes by doing nothing?

Of course, the cynic might argue that it’s in producers’ interests to hold off developing supply. As demand rises inexorably, and absent project development, shortages increase and prices continue to rise.

For miners that means greater free cashflow and profit generation. With capital expenditure constrained, dividends remain high or even increase and company valuations rise, heralding the return of miners as growth stocks.

For an investor, what’s not to like? So long as the capital destruction of the last super-cycle remains a dim, distant memory, the party begins in earnest and boards become the life and soul simply by sitting on their hands.

Should the Majors buy their way out of trouble?

However, that’s a pretty shortsighted view. Without the music of project development to keep things moving the party will eventually grind to a halt. Investors will seek growth in copper supply to cash in on demand and may look elsewhere if it is not apparent. Worse than that, unreasonably high prices combined with a lack of visibility on reliable, ESG-compliant supply could bring forth the spectre of substitution as consumers look to alternatives.

The question then becomes whether to build or buy? While it leaves the fundamental issue of a lack of overall project development unresolved, companies may choose to buy their growth. With borrowing costs low, equity valuation not yet at its peak now may well be the time to consider this option. Acquisition could offer an attractive opportunity to take a bigger bite out of the copper pie, attaching lower and known risks, and a guaranteed production stream. It could become a feeding frenzy.

Whichever way investors tilt the activity of their boards, action is needed and that is what is missing. To quote Sir Winston Churchill, “I never worry about action, but only inaction,” and it is inaction on project development that has to be a concern.

Get unique insights on metals and mining in your inbox

This article is part of a complimentary series exploring opportunities and challenges in the world of metals and mining. Fill in the form at the top of the page to be alerted to new articles as they are published.
Source: Wood Mackenzie