Bulkers in Demand as Freight Rates Go From Strength to Strength

Demand for dry bulk second hand carriers has seen a marked increase over the course of the past week, with many deals being reported. In its latest weekly report, shipbroker Allied Shipbroking said that “on the dry bulk side, it was a very vibrant week, with the intense interest from buyers retaining second-hand asset prices at firm levels for yet another week. We witnessed several deals emerging last week with focus being spread across different size and age classes, depicting the overall bullish sentiment in the segment. On the back of strong interest from buyers, asset prices made further gains last week. The current buying frenzy is expected to follow through over the next couple of weeks, while possibly even intensifying. On the tanker side, activity remained at mediocre levels for yet another week, reflecting the lack of confidence amongst market participants. The intense oversupply concerns and the current imbalance in the market has retained buyers away from the SnP market once again, while the number of keen sellers is expected to keep rising. Despite the decline noted during this past week, asset prices are still holding at relatively high levels for the time being”. 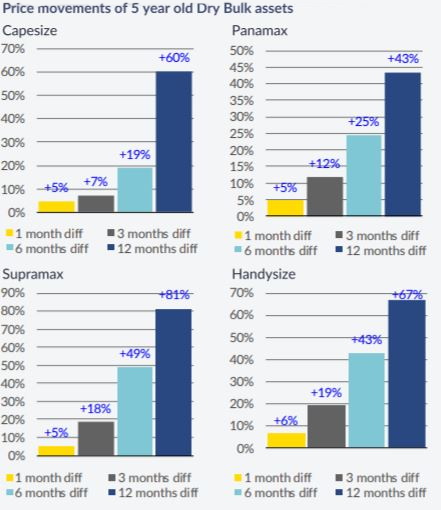 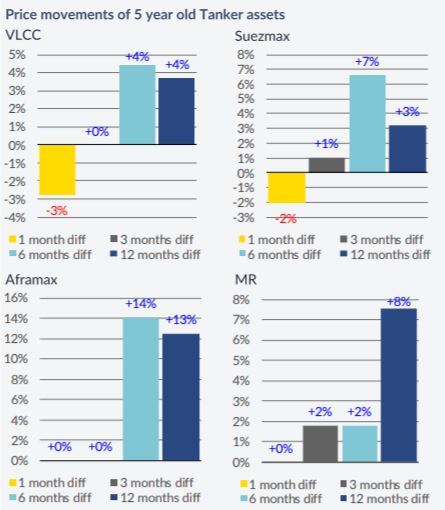 In a separate note, Banchero Costa noted that in the dry bulk market, “it was registered a busy week in the dry market with many sales reported in the Handy/Supra/Panama/ Kamsarmax segments and market prices still going up. After offers were invited last Wednesday, a modern Japanese Kamsarmax Lowlands Nello abt 82k blt 2015 Sanoyas (SS due 2025 BWTS fitted, ME-C) was sold at $32 mln to Greek buyers, furthermore two sisters Peak Liberty and Peak Pegasus abt 82k blt 2015/13 Tsuneishi ( BWTS-Fitted) were reported at $29.0 mln and $27.0 mln to c.of Globus Maritime. Buying interest was focused also for more vintage tonnage with Great Talent abt 76k blt 2005 Sasebo (SS due 2025; BWTS fitted) committed at $17 mln to chinese interests and Mahavir abt 74k blt 2000 Imabari sold at $12 mln.

In the Supramax segment, after offers were invited the 14 of September a Japanese controlled Tess 58 Trans Oceanic abt 58k blt 2012 Tsuneishi (SS due 2026 BWTS fitted) was committed at $23 mln. Furthermore, Ingenious abt 58k blt 2011 Hyundai Vinashin (BWTS fitted) was reported sold at $18.7 mln basis delivery February 2022. In the Handy segment, a Japanese controlled handy Maritime Faith abt 33 blt Kanda Zosensho, Japan (BWTSFitted SS due 2026 ) was sold at 17 mln to c. f Taylor Maritime. 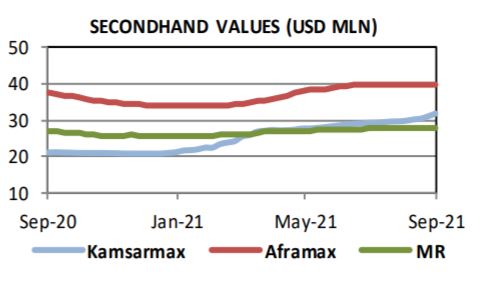 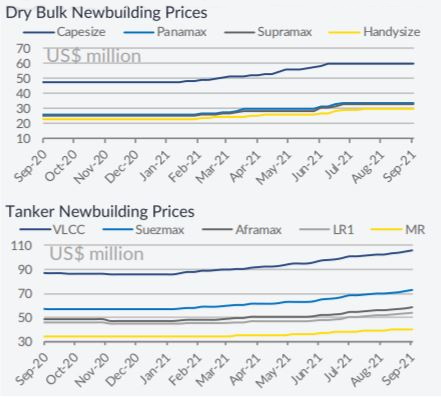 Meanwhile, in the newbuilding market, Allied added that it was “a fairly active week for the newbuilding market, with orders being placed across all key sectors, but with containerships still holding the lime light. In the dry bulk market, current newbuilding prices, lack of favorable slots and concerns over a more “balanced” future market have retained buying activity at moderate levels so far. This past week we witnessed two fresh orders for different size classes, both placed at New Dayang shipyard in China. The solid sentiment and the attractive freight market are factors that are likely to boost newbuilding activity further at some point, albeit the SnP market has so far continued to hold main focus amongst investors. In the tanker sector, we have a totally different picture, with the segment having suffered a very poor performing year so far in terms of freight earnings. This has led to minimal interest for newbuilding projects. An already oversupplied market, given the current demand fundamentals and the “expensive” newbuilding prices have also kept any fresh interest at bay. Finally, the containerships continue to be a key market in retaining momentum for shipbuilding activity, with robust sentiment and record high freight earnings likely to feed further fresh orders moving forward”, the shipbroker said.
Nikos Roussanoglou, Hellenic Shipping News Worldwide