Leading classification society Bureau Veritas Marine & Offshore has formally joined the ‘Coalition for Maritime Environmental and Energy Transition’ as a Founding Partner. The signing ceremony took place in the presence of Ms. Elisabeth Borne, the French Minister for Environmental and Solidarity Transition, during the Assises de l’Economie de la Mer, the leading annual gathering for the French maritime community held on 3 and 4 December in Montpellier.

The Coalition, developed by the French Maritime Cluster, aims to define a “2050 vision for maritime environmental and energy transition” and to identify the actions that will be key to meeting the greenhouse gas reduction objectives set by the Paris Accords and the International Maritime Organization (IMO).

This commitment by Bureau Veritas answers the call from French President Emmanuel Macron during his opening speech at the Assises to all stakeholders in the French maritime industry, to find collective and innovative solutions to tomorrow’s environmental and energy challenges. 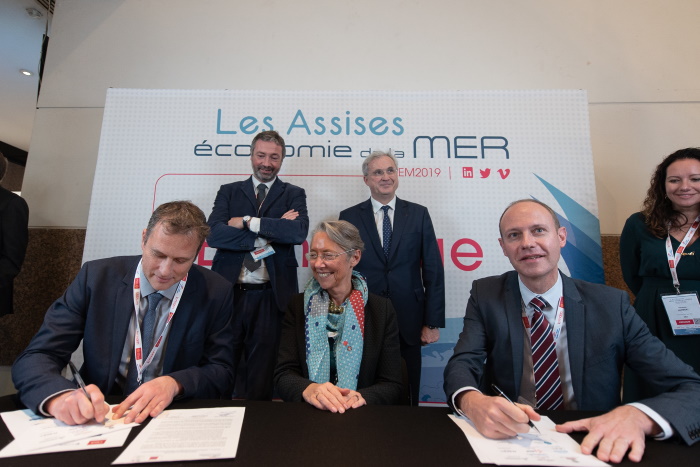 Bureau Veritas Marine & Offshore was amongst the first to support this initiative. Now a further 22 industry stakeholders have joined the Coalition.

Matthieu de Tugny, President Marine & Offshore at Bureau Veritas, commented: “The transition to cleaner and low carbon energy is a global requirement and the leadership taken by the French cluster reflects this need: both in the technology being developed for global markets and the initiatives of shipowners.”

One of those shipowners, CMA CGM, is building the world’s biggest LNG fuelled ships in China – with GTT’s Mark III Flex containment systems being fitted in the nine ships ordered. Commenting on this, Matthieu de Tugny said, ”We are seeing new models for ship design and ship operations and as a classification society we are highly focused on helping the industry respond to the challenge of change.”

The ship classification world is experiencing fast and significant changes as a result of the digitalization of the economy and the emergence of worldwide environmental awareness. These two trends are key pillars for Bureau Veritas’ development, who continuously maintain and develop the technological expertise acquired in the last decades.

Bureau Veritas’ membership to the Coalition fits into a wider active engagement in a variety of international initiatives such as the Global Industry Alliance (IMO) and the International Windship Association (IWSA).
Source: Bureau Veritas