With the first quarter of 2019 already in the past, most dry bulk ship owners will be looking to forget it as soon as possible. Dry bulk rates have plunged as a result of a lack of cargoes, on the back of physical and other disasters, ranging from cyclones in Australia to Vale’s dam collapse in Brazil. As a result, dry bulk ship owners have sought to alleviate the supply side of things in the beleaguered dry bulk market, with scrappings already close to the whole of 2018 mark, while shipbrokers expect to see an increase in newbuilding slippage rates as well. This can bode well for the future recovery of the market, but demand needs to pick up, in order for this scenario to materialize.

In its latest weekly report, shipbroker Allied Shipbroking noted that “with the BCI hitting an all-time low on its index value (though the Weighted Time Charter Average still holds at levels above those witnessed back in 2016) the overall atmosphere seems to be getting ever gloomier for the dry bulk’s largest size segment. Given its weighting within the Baltic Dry Index, as well as the fact that in most people’s minds it is a leading indicator for the dry bulk freight market, all this turmoil has not left the rest of the size segments unscathed”. 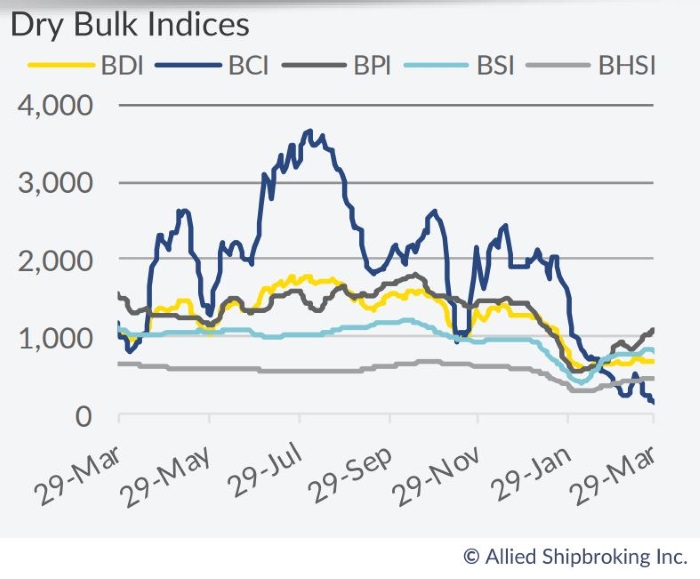 According to Mr. George Lazaridis Head of Research & Valuations, “the main damage being faced in the market seems to still be running from the significant disruptions being caused in Brazil from the wake of the Vale dam collapse in late January. The aftershocks from this disaster are expected to ripple on beyond 2019, while a fair bit of production capacity likely to take a fair amount of time before it can be retrieved back. At the same time however, a number of other factors have only piled on the bad news currently faced by the capesize market. The further set-back in caused by Cyclone Veronica as it caused serious disruptions in operations off the coast of Australia, with much of the Pilbara region now expected to note crippled activity levels for a little while longer”.

He added that “it was no surprise therefore when Rio Tinto came out on Wednesday to cut its 2019 outlook for iron ore shipments from the effected region, pointing to the disruptions caused by the tropical cyclone as well as an earlier fire at its port facility. Even as the world’s most prominent export region however manages to step up back to fully operational, things have been relatively sluggish on the demand side, as China still holds relatively high iron ore inventories from its February buying spree. Though there is a sense that the market will find fresh demand from other Asian nations, we have yet to see any sign of the gap being filled relatively soon”.

According to Allied’s analyst, “all this has led a series of bullish notes being issued on the price of iron ore, as many see the recent tightening supply as holding longer term merit. On the more positive side of things, China showed more robust growth figures in March, breaking its four-month losing streak. Many have taken this as suggesting that the most recent government stimulus measures are starting to take hold in the country, something that could well prove to sway the recent softening trend noted in steel production figures. March brought about a floury of increasing factory output, pushing the growth pace to its highest figure in six months. This may well be in part boosted by the restarting of production by a number of industrial plants in northern China after a six months period of environmental restrictions. If this continues during the rest of the year, the tightened supply will be stretched to its maximum, allowing for the overall negative impact to be minimal”. 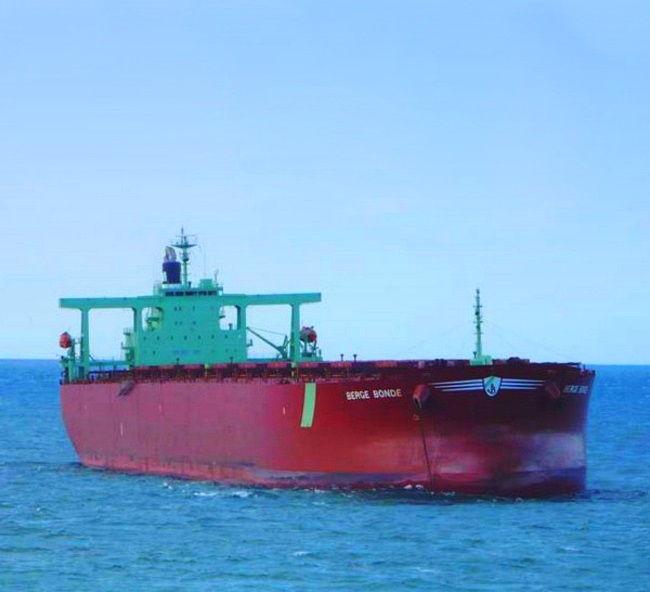 “At the same time, we have witnessed a sharp increase in scrapping activity, with the tally so far having already reached but a breath away from last year’s total annual figure. Given the dismal freight rate levels currently being seen and coupled with the fact that prices for scrap are still holding at highly enticing levels, this current trend could continue on, with more and more owners taking up the scrapping option and as such relieving the market from some of the excess supply pressure that has amassed. This could well follow through to the newbuilding delivery schedule, with slippages likely to intensify as most seek to take delayed delivery rather than getting stuck in the current freight slump. A better-balanced market could emerge from all this, yet it still looks as though 2019 will prove to be a disappointment overall, despite being still in its first steps”, Lazaridis concluded.
Nikos Roussanoglou, Hellenic Shipping News Worldwide