Dry bulk shipowners had longed for this period of time for more than nine years. It was late in 2008, when the market came tumbling down, amid a halt in world trade, as a result of the aftermath of Lehman collapse and its consequences in global economy. Shipowners will tell you though, that these dramatic events only heightened the downturn of what was a doomsday scenario waiting to happen in the dry bulk market. It was only a matter of “when” not “if”. Asset prices had reached an unprecedented level which was, frankly speaking, unsustainable, while the global orderbook was overbloated as well. Demand, however high, was never going to catch up.

The years which followed showed some blips and short bursts, but it was only until the second half of 2017, when a serious and sustainable recovery rally came to be. The Baltic Dry Index (BDI), the dry bulk industry’s benchmark, finished the year at 1,366 points, while only two weeks prior had reached a number just above 1,700 points, while sustaining above the psychological mark of 1,000 points for the most part of the second half of 2017. 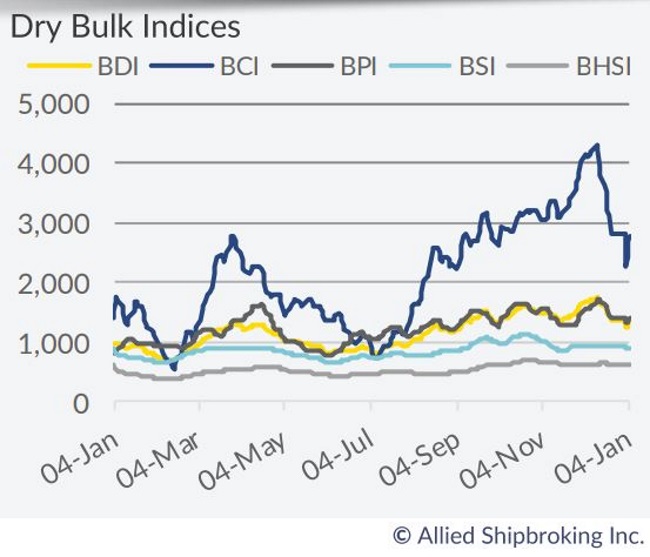 According to Allied’s Research Analyst, Mr. Thomas Chasapis, “Capesize and Panamax TCA saw their numbers boosted most, finishing roughly 92% and 64% higher on y-o-y basis, respectively, while the Capesize TCA managed to hit above the 30,000 $/day mark for a brief moment. The smaller size segments also witnessed a fair improvement, reaching levels well above what had been seen the past two years, though still not as impressive as the gains noted in the larger sizes. These improved earnings were quick to leave there mark on the secondhand market. With the total carrying capacity of vessels changing hands reaching just above 50 million dwt (close to 700 vessels), 2017 has clearly outperformed all previous years dating back to 2012”.

“More importantly”, Chasapis adds that “the figure that sticks out the most is the total invested capital, which concluded at the highest level noted these past 5 years by a fair margin. At the same time, it is important to note that despite total volume for 2017 being only marginally higher than 2016, the level of invested capital was significantly higher, pointing to the considerable increase in price levels being noted. These figures can be described as nothing short of impressive, especially when taking into account the highly volatile nature of this market and the still recent memory of the dire earning conditions noted back in 2016. The main drive was still one of bargain hunting, with many distressed deals having been put on the table, while many buyers still feeling that there was room for further gains to be had”. 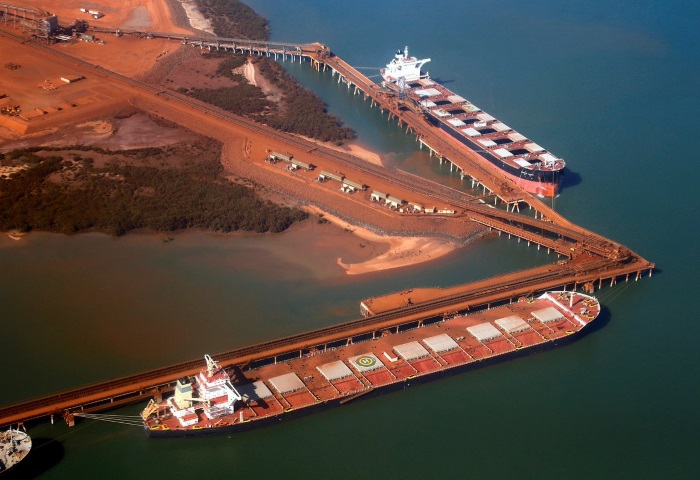 According to Allied’s analyst, “this robust growth in values describes best of all the overwhelming optimism now witnessed all around. When it comes to investing in shipping however, increased activity in the secondhand market comes typically hand in hand with increased appetite for new ordering. This time around, new orders however were curbed to a minimum during. New contracting accounting for a mere 16% of the starting Orderbook, while given the strong level of deliveries, the orderbook decreased by roughly 28% during the year. Looking at it in more detail, we note that interest in new ordering started to emerge in mass from the summer period onwards, keeping in line with the strong movements noted in the freight market. Indicatively, the Panamax and Capesize segments showed new order activity ballooning during the final quarter of 2017, with 96% and 65% of total new orders placed within the second half of the year”.

“All-in-all the main conclusion of what we have seen so far is that the Dry Bulk sector continues to be on a healthier track, with an overall optimism being felt with regards to the medium term. However, the causes behind the most recent slump and the lessons learnt from it must not be forgotten easily. Furthermore, given that the growth of the fleet reached 2.18% for the year, while the scheduled deliveries for this year are still fair in number, we must continue to make an effort to keep the fleet growth rate attuned with what demand dictates”, Chasapis concluded.
Nikos Roussanoglou, Hellenic Shipping News Worldwide