Carbon dioxide capture solution progressing at the Port of Gothenburg

What is the smartest way to transport captured carbon dioxide from facility to quayside? To discover the answer, five major energy companies in western Sweden have joined forces in the CinfraCap project. A prestudy commenced in May to determine whether a joint solution could be found for an efficient, sustainable infrastructure for captured carbon dioxide. Every aspect of this undertaking is being examined in detail, both on the drawing board and out in the port.

“Our remit was to investigate the possibility of creating an optimised logistics and intermediate storage chain, the ultimate aim being to transport up to two million tonnes of captured carbon dioxide each year from facility to quayside. To realise this ambition, a highly efficient infrastructure needs to be in place, and we are currently working flat out to produce analyses, scenarios, and estimates,” said Hesam Mortazavi, project manager at the COWI consulting group.

A visit was made this week to the Energy Terminal at the Port of Gothenburg to identify a suitable location for intermediate storage and possible liquefaction of carbon dioxide.

“We have found a potential site close to the quayside that could work. We have also been around the port to get an overall picture of the situation and to formulate ideas about the configuration of the new pipelines down to the quayside,” said Claes Rödén, Engineering Manager at the Gothenburg Port Authority. 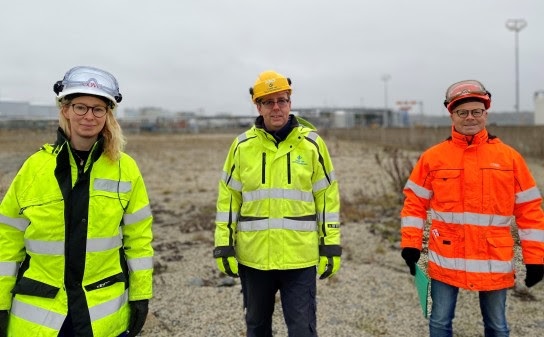 At the Port of Gothenburg’s Energy Port, various locations suitable for building a future facility for intermediate storage and liquefaction of carbon dioxide are being investigated. Photo: Gothenburg Port Authority.

Financial benefit
Previous experience has shown that complex infrastructure projects in general tend to be extremely cost-intensive, and funding is frequently a crucial issue. With this in mind, the focus during the prestudy was on the potential to optimise the cost of investment and energy consumption and determining which alternative – an individual or joint investment – would be most suitable. The CinfraCap prestudy will be completed in March 2021 and the results will then be presented.

“Regardless of the outcome, we have already acknowledged the need to recommend subsidies. As it will be a costly project to implement and maintain over time, it is vital that we have an established investment framework in place for both the facility and the pipelines, and that we take full account of future operating costs. However, there is a commercial upside in the fact that the companies can sell emission rights and by doing so reduce their carbon emissions when they use CCS technology,” said Isabella Herstad-Norin, process manager for CinfraCap at COWI.

Fact file: CinfraCap
CinfraCap stands for Carbon Infrastructure Capture. The project is focused on the transport of captured carbon and how this can be done in a climate-smart, cost-effective way. The aim behind CinfraCap is to produce a more comprehensive picture of the logistics chain required to transport captured carbon dioxide from different industrial facilities in western Sweden – from liquefication and intermediate storage, through to distribution to ships and onward transport to the repository site. The interface for CinfraCap will be the fence around the facility in western Sweden that captures the carbon dioxide, through to the loading arm on the vessels that transport the liquefied carbon dioxide onwards by sea.

CinfraCap will complement a number of other ongoing research and development projects, including Preem CCS, ZEROC, and Northern Lights, which is a full-scale carbon dioxide repository project being run off the west coast of Norway.

Fact file: CCS
Carbon Capture Storage, CCS, involves trapping carbon and liquefying it under pressure. It can then be safely stored deep underground, in many cases below the seabed, reducing emissions of greenhouse gases into the atmosphere. If the carbon dioxide is captured from a biogenic source, this could even result in a reduction in carbon dioxide levels in the atmosphere.
Source: Port of Gothenburg