The Car Carrier market went into overdrive in mid August, after Nissan extended their 100,000 USD/Day rate on Lake Geneva (6,178 CEU, Jan 2015, Imabari) just four weeks into the deal. A record breaking fixture setting a higher high in a raging bull market, paralysed by short PCTC supply following years of underinvestment. To put this into perspective, it is 174% higher than the January index only nine months previously, up a staggering 488% compared to December 2019 based on a one year 6,500 CEU Time Charter.

Additionally, multiple sources are now reporting that a modern Panamax unit is about to be fixed out at 120,000 USD/Day. Suggesting a further 20% rise is incoming, which is understandably making tonnage providers and investors excited. In a nutshell, we are witnessing the biggest bull run in the history of the sector, which is showing no obvious signs of easing. The key questions now being asked, how long can it last? How high can we go? Or did tonnage provider Eastern Pacific Shipping, just signal an approaching top by offloading 15YO Lake Superior (4,902 CEU, June 2007, Xiamen Shipbuilding Ind.) to XT Shipping for USD 50 mil on the 14th of September? 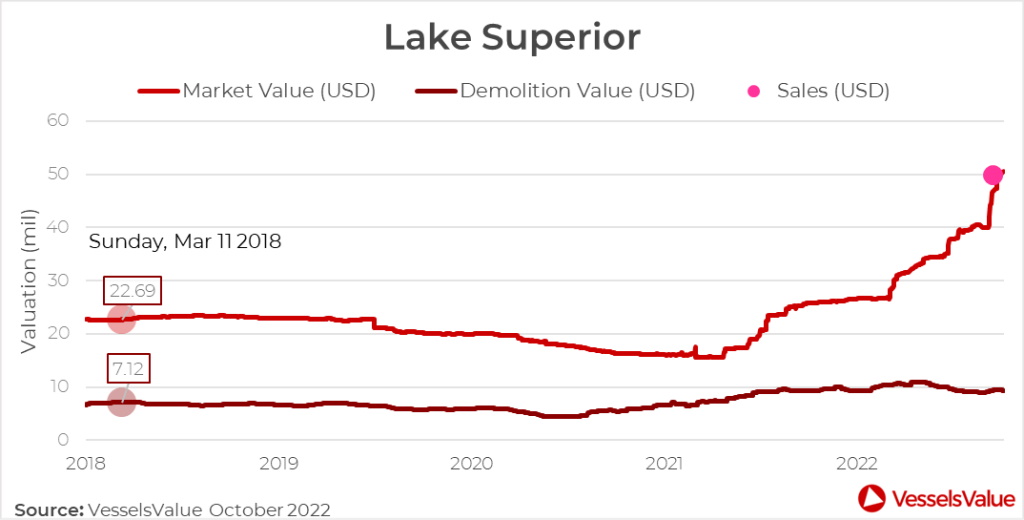 It’s not only PCTC assets that are riding the wave. Large CONROs with dedicated car decks and generous High & Heavy garage space are being chased by PCTC operators desperate to find more capacity. Most large CONROs can accommodate up to 2,500 cars per head haul voyage, in addition to H&H, Container and Project cargoes, proving an attractive solution when PCTC supply has run dry. Last month, Glovis convinced Grimaldi to release their premium G4 series Grande Abidjan (5,720 LM, 1,800 TEU, May 2015, Hyundai Mipo) on charter paying in excess of 99,000 USD/Day for the privilege. A rare move by the Neapolitan family run company, demonstrating that everything has a price. These niche multipurpose ships usually trade in house for Grimaldi on Atlantic routes until demolition age. Evidently, an offer which Grimaldi could not refuse.

Also, Liberty Global Logistics purchased 11YO CONRO Jolly Diamante (6,350 LM, 3,001 TEU, Dec 2011, Daewoo) from RORO Italia (MSC) back in June for an undisclosed price, understood to be in the low 70s. Asset prices for CONROs have been pumping since the onset of COVID-19, thanks to exceptionally strong Container earnings which are now correcting. PCTC earnings are now the driving force and were instrumental in this sales price. A smart move by Liberty, saving them from a costly rising charter market.

Again, it is unusual to see CONROs exchange hands based on their scarcity, there are less than 66 units trading on the water today. Short PCTC supply has forced operators to explore every opportunity to boost car capacity for their OEM clients, including livestock conversions. Operators can’t wait three years for a newbuild, assuming they can raise the finance, ships are needed now which is having a major impact on values.

The sale of Jolly Diamante was a great deal for parent Aponte, considering Messina originally paid USD 70 mil to Daewoo shipyard back in Dec 2009, at a discounted rate after the 2008 financial crash. Competitors criticised the hybrid designs at the time for being too Container focussed, with insufficient RORO capacity for Africa and Middle East markets. Messina had the last laugh.

As clearly highlighted by the Container sector these last two years, shipowners earn a pretty penny from port congestion when sustained at major hubs. It draws capacity out of the market and drives a deeper wedge between supply and demand from reduced liner frequency, compounding the subsequent imbalance month on month, filtering into every supply chain. Bremerhaven is a critical port for Transatlantic and Far East OEM cargoes. If average vessel delays continue to stay high through Q4 2022, then freight prices for cars, H&H and PCTC charters are going to harden up, feeding into higher asset values. And this is before we enter 2023, when the IMOs emission regulations are likely to force global fleet speeds to slow. VesselsValue estimates a 5 to 10% capacity cut in real terms for a sector already short on supply. Bullish for rates and shipowner earnings, bearish for shippers and charterers low on tonnage.

Looking at macro demand data, global light vehicle sales are down -3.8% versus 2021 due to sluggish selling rates in North America and Europe, and ongoing supply chain issues (LMC Automotive). China continues to lead the recovery, projecting 37 mil units sold this year, a massive c.38% of the total light vehicle sales market. Double digit price increases were recorded for new light vehicles retailing in North America in H1 22. However, Electric Vehicles (EV) sales in USA and Canada still managed 49% growth in this period (versus 9% in Europe) which speaks volumes. Overall inventory is down, overall sales are down, but EV sales continue to grow, despite price rises for new cars and rising inflation.

Taking a brief look at OEMs showing most export promise on PCTCs, Tesla are ready to scale shipments from Gigafactory Shanghai to global destinations in 2023. BYD (China) are in advanced talks with local shipyards to build 6-8 x 7,700 CEU dual fuel LNG units. NIO (China) is entering nine more European markets in 2023, followed by the US in 2025. VinFast (Vietnam) are courting PCTC operators to call into Vietnam regularly, after six stores were opened in California. China remains on course to be an electric majority car market within two years, which is staggering. Holding an EV monopoly with huge consequences for trade routes later this decade.

Now let’s make some predictions for 2023. My 100,000 USD/Day fixture prediction in Q1 based on a 6,500 CEU 1 Year Time Charter was realised quicker than anticipated. It sounds like a deal at 120,000 USD/Day could be firmed up soon, which if concluded, forces us to consider the possibilities of a 150,000 USD/Day fixture in this current cycle which is mind boggling. It’s optimistic but by no means insurmountable, looking at the net fleet position and forward trading environment, supported by slower steaming and reoccurring port congestion. Global light vehicle sales and production forecasts are also forecasting growth in Asia next year, which is positive for PCTC cargo miles to Europe and North America as major buyers. Latin America is also being targeted by EV start ups in China, which is supportive of firming PCTC demand. In terms of an average for 2023, we expect to see 125,000 USD/Day reached on the monthly index.

So, what does this mean for shipper car rates? Logically, they must follow earnings. How operators achieve this with OEMs is the difficult part. Wallenius Wilhelmsen are using this bull cycle to steer the market away from spot contracts, to establish higher contract freight rates for improved returns to shareholders. Earnings results for Hoegh and Wallenius have been consistently good for three quarters straight. It’s a prime time to change the narrative for a sector that largely missed out on the windfalls enjoyed by Container Carriers from COVID-19. You only have to look at stock price gains and analyst guidance for specialist PCTC tonnage providers this year to realise the forward potential up for grabs, if PCTC operators play it right. It won’t be easy, as spot rates pay well in tight markets. For investors, it’s still an excellent time to buy into this sector, depending upon your time horizon. Another 12 months of gains are almost guaranteed on what is foreseeable.

So, when can we expect a cycle top? Difficult to say. Short supply is firmly priced in for another 12 months, possibly 24 barring no major shocks such as a global war. Eastern Pacific’s sell off is also tied to their newbuilding programme and CII ratings. These 15/16YO Xiamen Shipbuilding units have low efficiency ratings (Figure 1.3). It is therefore a good time to sell for EPS because their earning power is likely to decelerate quickly once the bull run is over.

Also, you will never regret selling into a rising, red hot market. A sales price in the region of USD 53 to 56 mil for Lake Kivu (4,902 CEU, Nov 2006, Xiamen Shipbuilding Ind.) would be an amazing return, up 195% in value since December 2019. You can’t argue with that.
Source: VesselsValue