In February 2019, Skuld published Manual handling: an ever-present risk to remind our members of the continued incidents in connection to musculoskeletal injuries. In addition, a simple assessment methodology to mitigate risk of such injuries was included. To further remind our member’s of the importance of maintaining good crew health and well-being and mitigating risk, the below is a case study of an incident report to the club. 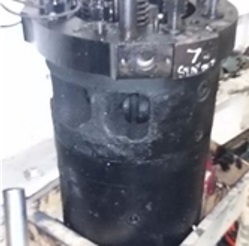 Event
Two crew members were told by an officer to move a main engine spare from the engine room to the wet deck above. The spare part weighted approximately 250 kg.

It was decided by the crew that as there was a swell it was not possible to roll the part, so it was decided to pull and lift instead. The component had to be moved from its initial position along the deck through a door way with a lip of approximately 15 to 20 centimetres into the shaft tunnel and then along the shaft tunnel to a hatch where the part could be hoisted to the above deck. The two crew members first pulled the component along the deck and then four crew attempted to lift it through the door frame over the lip of the door. At this point one of the crew members felt a ‘snap’ in his back however continued to manoeuvre the part to the location below the hatch and up to the next deck and completed the task. The crew member was unable to work for the remainder of the passage.

Observations
There was no risk assessment or toolbox talk prior to starting the move performed by those who were supposed to be supervising the task. The part itself was extremely heavy and should never have been attempted to be moved by manual handling alone. It is a vital element of any task undertaken on board that a full risk assessment is performed to ensure that risk is managed and to ensure it is as low as reasonably practicable throughout the operation. In the case of a manual handling risk assessment it can be very helpful to following a systematic assessment methodology such as the TILE method and we refer to our article dated 5 February 2019 in this respect.

Mitigating actions
The following actions should be implemented to prevent further incidents:

• Review procedures to ensure the efficacy of risk assessments and toolbox talks. Risks and control measures must be identified, put in place, discussed and understood by all, particularly by those supervising the operations.
• Specifically, for manual handling tasks ensure that there is a systematic methodology and procedure for risk assessment.

Financial cost
The cost of this claim was USD 583,000.
Source: Skuld