ChartWorld Extends the content of its unique CIO+ Data Service

The newly-published OCIMF Ship Inspection Report Programme, SIRE 2.0, includes a direct recommendation to ship inspectors: they are urged to audit the shipping company policies and procedures for the OOW to display T&P Notices to Mariners in the ECDIS.

SIRE 2.0 also highlights that the Admiralty Information Overlay (AIO) might not provide complete information that is contained in the T&P NtM but that might also be absent from the ENC charts. Where there are conflicts of scale between UKHO products (AIO) and the areas covered by T&P, AIO will display a grey hatched polygon labelled No Overlay. In such circumstances, AIO users should gather information from other sources, such as local T&P, to determine where there are any relevant T&P notices. 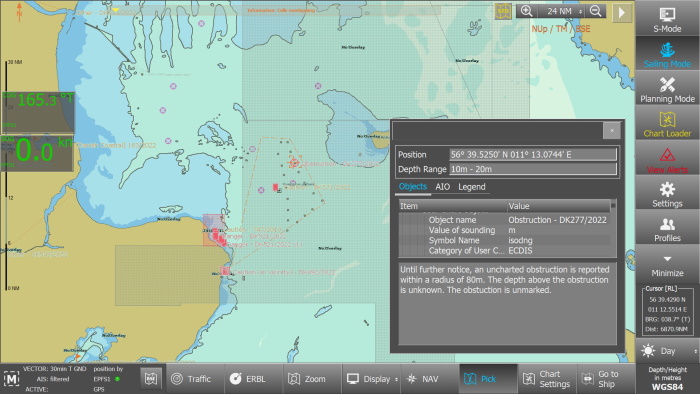 CIO+ obtains data from T&P Notices to Mariners published by UKHO and other hydrographic offices, from Coastal and Local navigational warnings, and from NAVAREA NAVTEX. This makes CIO+ T&P and CIO+ NAVAREA a powerful combination of input sources, filling the gaps that the ENC and the AIO products leave with regard to the T&P data.

ChartWorld’s data team, of professional hydrographers, cartographers, and experts in geomatic science, continuously performs gap analysis. This is done to define important navigational information not included in the official ENC data. Such analysis is used in order to extend the data sources used for CIO+ production. As a result of the gap analysis, we found out that AIO shows a lot of the No Overlay polygons in the Danish waters, whereas Danish T&P were not included in the official ENC. To fill this gap, ChartWorld’s data team downloaded and processed all T&P Notices published over the last year by the Danish Geodata Agency and the Danish Maritime Authority. All Danish T&P notices in force are now included in the CIO+ Database and are supplied, for display in different ECDIS models, as a user chart overlay. This approach helps the ship’s crew to comply with the new OCIMF recommendations for ship inspection.
Source: Chartworld