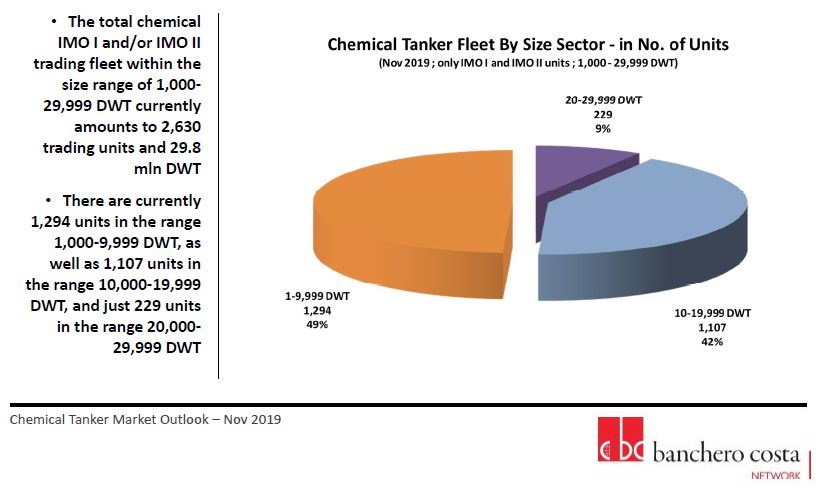 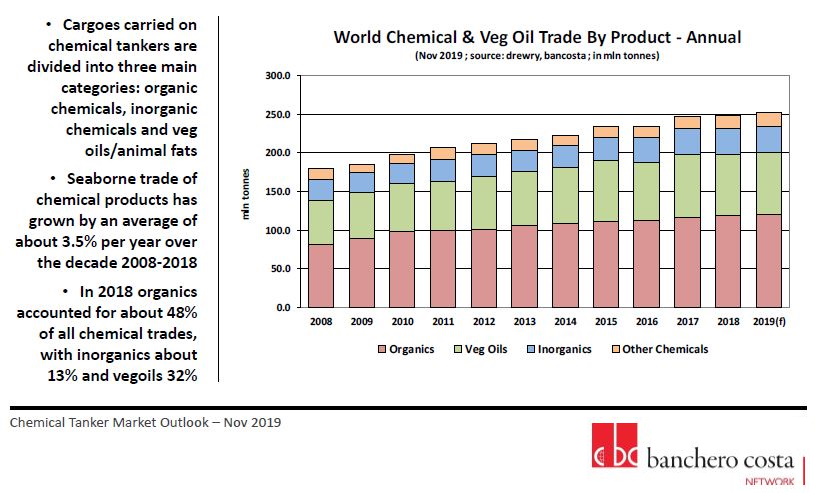 In terms of demand, Banchero Costa said that “cargoes carried on chemical tankers are usually divided into four main categories: organic chemicals, inorganic chemicals and vegetable oils/animal fats and others chemical types of cargo, like molasses. Organic chemicals are derived from hydrocarbon sources such as oil and natural gas. They are primarily used as feedstock for production of other chemicals or for products such as plastics, fibres, rubber and pesticides. The main seaborne traded organic chemicals include methanol, paraxylene, MTBE, styrene, benzene and toluene. Together they represent almost 50% of the seaborne trade of chemicals and have grown steadily over the last twenty years. China is today the largest consumer of organic chemicals, although 2018 could be remembered as the year when trades routes started to shift from “To China” into “From China” since new capacity kept entering into service and chemical imports started to slow”. 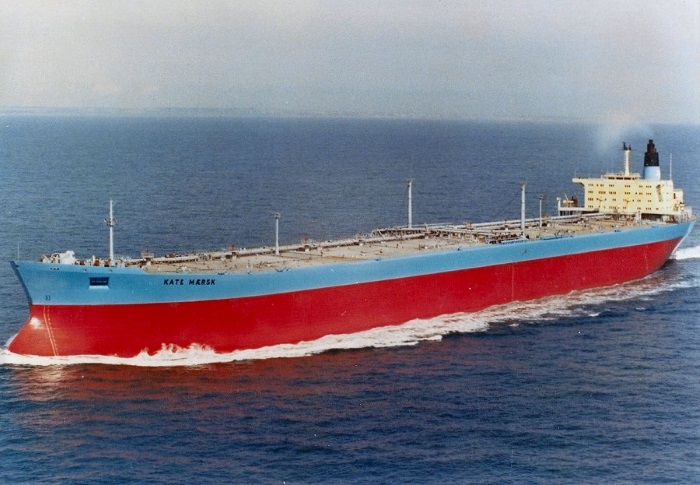 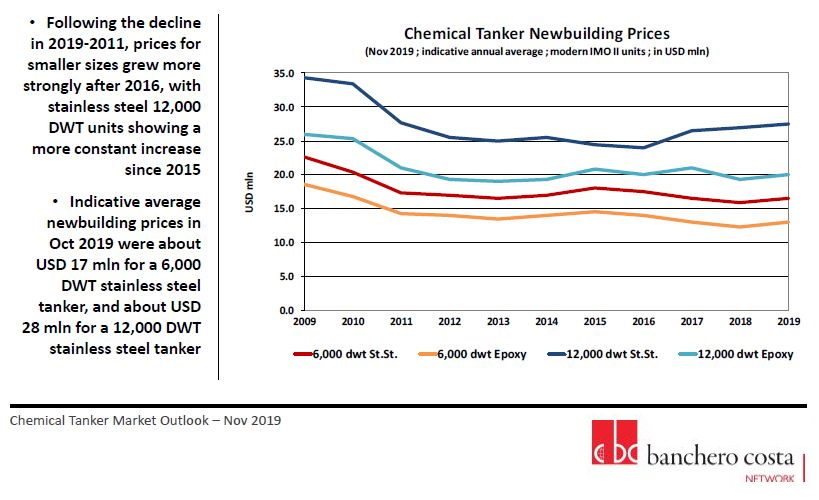 The shipbroker added that “in addition to the tariffs and antidumping duties on some of its chemical imports that China has kept on imposing over the latest four years, the trade tensions with U.S on tariffs’ imports that started in 2018 will heavily impact the sector globally by causing disruptions and change of trade flows still in 2019. Methanol is the most important organic chemical by volumes and its trade increased significantly in recent years. Its trade has been driven by Chinese demand, whose imports have increased over ten fold over the past decade but slowed down in 2018. According to China Customs data, methanol imports reached 8.1 mln tonnes in 2017 and declined to 7.4 mln tonnes in 2018, or 11% of its methanol needs. China consumed approximately 65.4 mln tonnes of methanol in 2018. China’s consumption is expected to grow by 6% in 2019, to 69.4 mln tonnes India is also a growing source of methanol demand. Methanol imports to India have more than doubled over the past 10 years reaching around 1.7 mln tonnes in 2017 and 1.9 mln tonnes in 2019, around 90% of its methanol consumption. India’s methanol consumption is expected to rise by 4% in 2019 to 2.2 mln tonnes. Iran, the largest methanol exporter together with Trinidad & Tobago, represents the major methanol supplier for both China and India and is expected to add 4 mln tonnes/year of new capacity after the launch of two plants. However, U.S. re‐imposition of sanctions on Iran may curtail country’s exports. While China, the largest buyer of Iranian materials in 2017, has reduced its import of Iranian cargoes last year, uncertainty reigns over India methanol market”, Banchero Costa said. 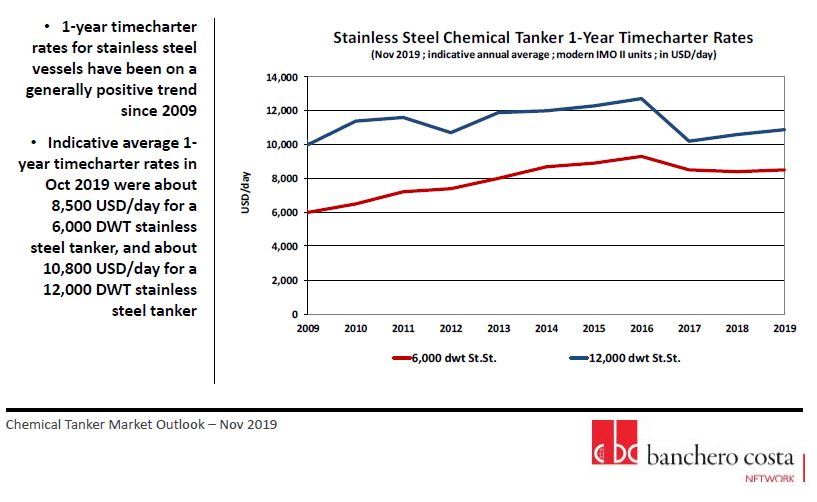 “The U.S. are also expected to become a significant exporter of methanol. A surge in new U.S. methanol production capacity is expected over the next few years, driven by available shale‐derived feedstock. U.S. exports of methanol surpassed the 1 mln tonnes mark in 2016 by reaching 1.51 mln tonnes, and kept previous year levels in 2017. In 2018, exports jumped 59% and exceeded imports in five of the last seven months of the year, and are expected to exceed imports on a net basis at some point this year, pushing the country closer to becoming a net exporter of the petrochemical. The growth stems from new capacity at American plants. US methanol consumption depended largely on imports for years until the domestic plant build up began in 2011‐2012. Imports have shrunk steadily since then, falling 6% in 2018 and amounting to less than half the total imports of 2011. Vegetable oils are obtained from plant matter, commonly seeds and nuts, and include both edible and inedible oils. Vegetable oils and fats are principally used for human consumption but are also used in animal feed, for medicinal purposes, and for certain technical applications. The vegetable oil processing industry involves the extraction and processing of oils and fats from vegetable sources. Vegetable oils represent 31% of total chemical seaborne trade, around 80 mln tonnes in 2018, and are one of the fastest growing typologies of ‘chemical’ cargo. The vegetable oil market is highly dependent on exports from South East Asia, with Indonesia and Malaysia expected to account for 37% and 22% of global exports respectively in 2018/19. The USDA expects vegetable oil import volumes to grow a further 3.0% in 2019/20 to reach 82.0 mln tonnes. Of these, 62% is represented by palm oil, followed by soybean and sunflower seed oil at 15% and 11% respectively. Palm oil trade is forecast to grow 3.5% to reach 51.3 mln tonnes in 2019/20 while soybean oil trade is expected to grow by 3.1% to 11.7 mln tonnes. The largest importers of vegetable oils are India, Europe and China, which accounted for 21%, 13% and 12% of global import volumes in 2018/19. Inorganic chemicals comprise mostly of acids, such as sulphuric acid, phosphoric acid and nitric acid, (mainly used in in the production of phosphate fertilizers) as well as caustic soda (primarily used in the aluminium industry). Inorganic chemicals represent only around 33 mln tonnes per year, and volumes have increased only moderately over the last few decades”, Banchero Costa concluded. 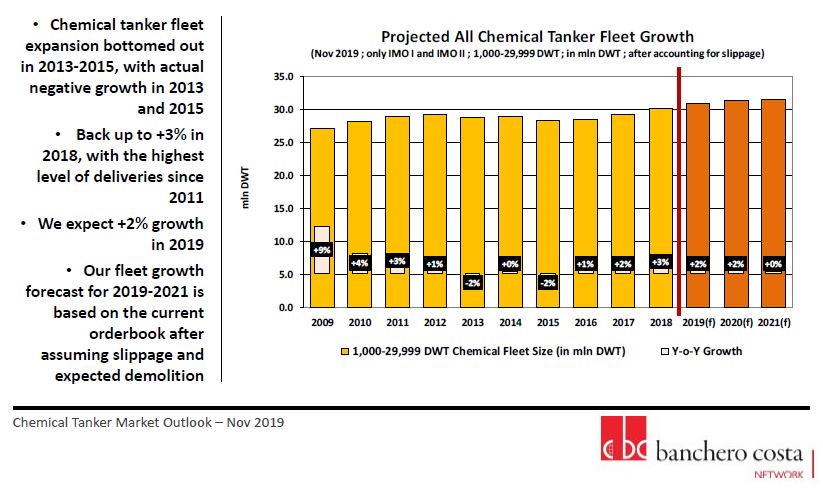 The 2010s: a decade of market imbalance and ultra large container ships

Ports can be the front runners of the energy transition, if port authorities and industry sectors join forces