Iran is unlikely to attempt to shut down traffic through the Strait of Hormuz in spite of high political tensions, although there is scope for shipping costs to escalate.

Hostilities between the US and Iran through much of last week prompted fears that Iran may seek to retaliate by closing the Strait of Hormuz, a key shipping artery from east to west for crude oil and chemicals.

Iran is thought to be behind several attacks on tankers passing through the Strait in recent years after the US reimposed sanctions on the country and tensions increased with Saudi Arabia.

However, it would not be in the country’s interest to cut off all traffic, according to Lombard managing director for global political research Christopher Granville.

“Our explicit assumption here is that Iran will not of its own accord seek to close the Strait because it needs to keep the oil flowing,” said Granville.

Market unease following Iranian missile attacks on US military bases in Iraq led to reports of several companies suspending shipments along the route, but conditions have normalised since then, according to sources.

Shipping is returning to regular operations along the strait, and the substantial hikes to insurance costs that followed the tanker attacks have failed to materialise, sources added.

Insurance costs skyrocketed in the aftermath of the tanker attacks, but the market is more sanguine about land disruption in a region that has been riven by conflict for much of the last several decades.

Any further attacks on vessels on the route would be likely to result in the fresh insurance hikes and likely shipping suspensions.

Brent crude futures pricing fell back to under $65/bbl after spiking to over $71/bbl at points when it looked like the US and Iran may have been drifting toward a more direct sustained conflict than the simmering tensions and proxy skirmishes of recent years.

While the closure of the strait would have a substantial impact on chemicals shipments, with over half of global linear low-density polyethylene (LLDPE) and nearly 20% of oil shipments passing along the route, sources have questioned whether Iran has the power to close it for any length of time.

“Iran could close the Strait… but the US can force it open,” said a source with knowledge of the geopolitical conditions in the region.

“The biggest threat to the Gulf in terms of the strait is if Iran mines it… [or] they probably deploy their four submarines, but they wouldn’t last very long in the face of a US naval operation. The US would not tolerate closure. In the short-term, you’d get some disruption but not in the longer-term,” added the source.

The impact that the closure would have on Iran itself means that it is unlikely to be a course that the country or the Iranian Revolutionary Guard Corps (IRGC) took without substantial provocation, due to the impact it would have one of the country’s key allies and patrons.

“China is an important strategic supporter of Iran in the present confrontation… China being the key principle market for Iranian oil,” Granville said.

“I think it would be the height of irrationality on Iran’s part to cause damage to the Chinese economy by having that effect on the physical oil markets.”

The potential for smaller-scale attacks along the strait, particularly on shipping vessels could still result in substantial disruption and cost increases for chemicals logistics, which could be felt up and down the supply chain. 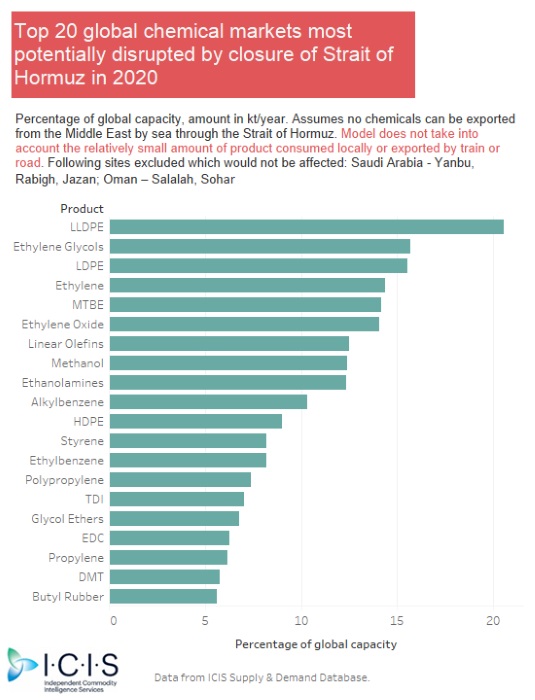