With the allocation, which was expected to have been announced two weeks ago, quota holders are finally able to buy crude barrels for delivery by end-2021. Some independent refineries suffered from a shortage of quotas, which capped their throughput to a certain extent.

“If the allocation was further delayed, we may have to take regional crudes, or those in bonded storage, in order to use up the quotas by year-end to secure the volume for next year,” a Shandong-based refiner said.

However, the volume was lower than the 19.8 million mt expected for this round, which is the worst case scenario.

Shenghong Petrochemical, which is expected to start trial operations either in late-October or early November, has already kicked off its crude purchase prior to the quota allocation.

The refinery is expected to take at least one ESPO cargo and another cargo from Saudi Arabia from late October onwards.

Seven refiners were absent from the list of recipients for this batch of quotas, and will not receive a total 6.85 million mt of quotas for the remainder of this year.

The other six refineries were heard to have encountered varying issues with regards to illegal quota trading, according to market sources.

“This suggests the government does tighten quota management, punishing those who violate rules,” a refinery source said.

In addition, Zhejiang Petroleum & Chemical, which was expected to receive an additional 4.5 million mt of quotas, at least for its new 20 million mt/year phase 2 refinery project, was also not on the list.

A source with ZPC said the company expects Beijing to separately allocate additional quotas to the company by end-2021.

The refinery has issued tenders to purchase at least two to three VLCC crude cargoes from the Middle East early this week, including Basrah crude.

Prior to this, the refinery had shut a 10 million mt/year CDU, which was part of Phase 2 of its project due to feedstock shortage.

This latest allocation brought the overall quota allocated to 43 refineries to 171.75 million mt, which is 4.3% lower than the total allocation of 179.4 million mt to 44 qualified refineries in 2020.

“Quotas are still in short,” a Beijing-based analyst said.

These 36 refiners have been awarded a combined 146.38 million mt of crude quotas in four batches, accounting for 85.2% of total allocations to the independent refining sector so far in 2021.

The refiners may have to import bitumen blend and fuel oil to compensate for the cut in crude imports in order to sustain crude runs.

In China, refineries built and operated by state-owned companies — CNOOC, PetroChina, Sinochem and Sinopec — do not need quotas to import crude.

All other refineries, including independents and those owned and operated by state-owned companies such as ChemChina and Norinco, require import quotas. 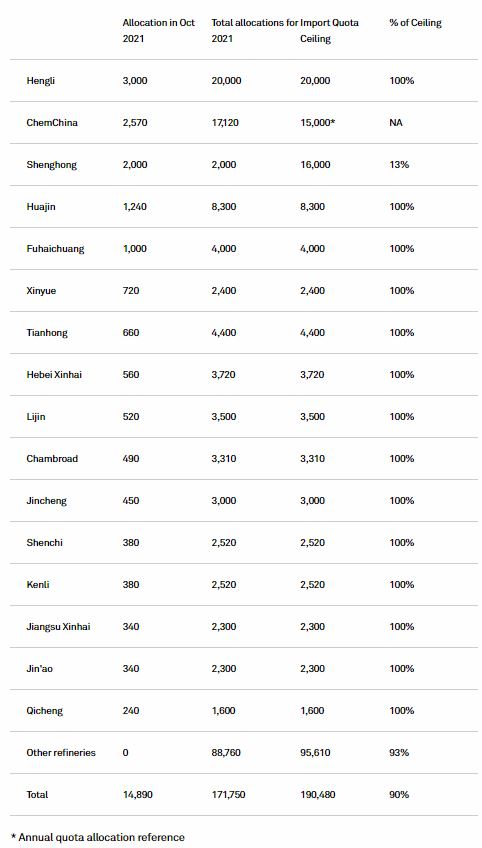