Alumina prices in northern China touched their highest in almost five months on Wednesday as production shutdowns in Shanxi province left the market fearing a shortage of supply.

Xinfa Group, one of China’s biggest aluminium smelters, is closing all production lines on its 2.8 million tonnes per year alumina refinery in Jiaokou, Shanxi amid an environmental dispute, a company source said on Thursday, adding that it was unclear how long the plant would be closed.

Consultancies AZ China and Baiinfo also told clients of the closure, while a logistics source working with Xinfa told Reuters shipments from the Jiaokou plant had come to a halt. Xinfa did not immediately respond to a request for comment.

China’s state-run CCTV last week reported that a Shanxi unit of Xinfa had been dumping red mud, a toxic byproduct of the process that refines alumina from bauxite, in Xiaoyi city. As the dump was left uncovered, the local river system was contaminated and residents complained this was having an impact on crops, CCTV said.

Shanxi is China’s second-biggest region for alumina, a substance used to make aluminium, with 20.24 million tonnes of output last year, according to data from the National Bureau of Statistics.

Spot alumina prices in northern China rose to as high as 2,990 yuan ($435) a tonne on Wednesday, the highest since Dec. 25. The Shanxi situation is also spurring a rally in aluminium prices in China, the world’s top producer and consumer of the metal, which hit its highest level since late October. 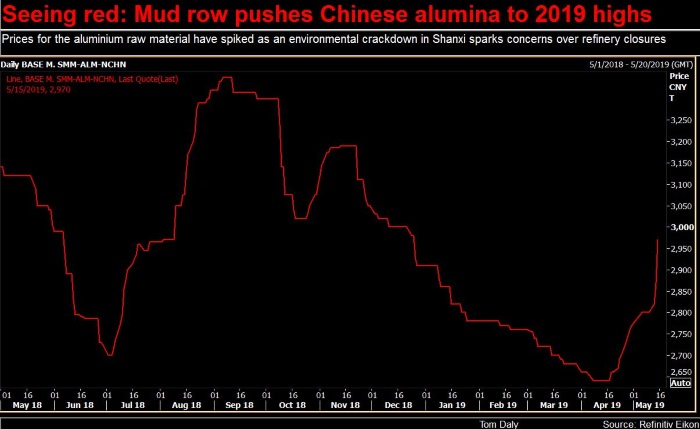 “We have lots of inventory in Xinjiang,” the Xinfa source said when asked about tighter alumina supply, referring to the northwestern Chinese region that houses around half of Xinfa’s aluminium capacity. The company also has smelters in Shandong.

Xinfa also has a 1.2 million tonnes per year alumina refinery in Xiaoyi but this will not be closing for now, he added.

Citing logistics sources, AZ China managing director Paul Adkins said in a note that Xinfa’s alumina deliveries to remote customers would stop on Wednesday and nearby deliveries would cease from May 23.

“We have not seen any notice of force majeure yet, but that could come after today’s meeting” between Xinfa and the local government, Adkins added. The Xinfa source confirmed such a meeting had been due to take place.

Another 450,000 tonnes per year alumina plant in Xiaoyi belonging to Huaqing Aluminium has also closed in light of the environmental dispute, according to AZ China and Baiinfo. The company could not be reached for comment.
Source: Reuters (Reporting by Tom Daly; Editing by Susan Fenton)