Further evidence of Donald Trump’s trade war with China is set to show up in economic data due over the next few days, although it will likely just be a taste of things to come.

From exporters of Wi-Fi equipment to households splurging on Maine lobsters and other American goods, China is beginning to adjust to the effect of the current tariffs from both nations, and the possibility of more. Hints at what’s happening will come in June’s trade data on Friday and second quarter gross-domestic product figures due on Monday.

The trade war arrives as the economy is already slowing, adding an external shock to a home-made one. President Xi Jinping may ultimately have to choose between softening his multi-year campaign to control debt levels, or letting growth slow below the target of 6.5 percent.

“There appear to be some risks to the 6.5 percent target, but the government is still committed to it,” said Chang Jian, chief China economist at Barclays Plc in Hong Kong. “As the trade tensions escalate and the data shows more signs of weakness, there will be more policy support and we should see some stabilization.” 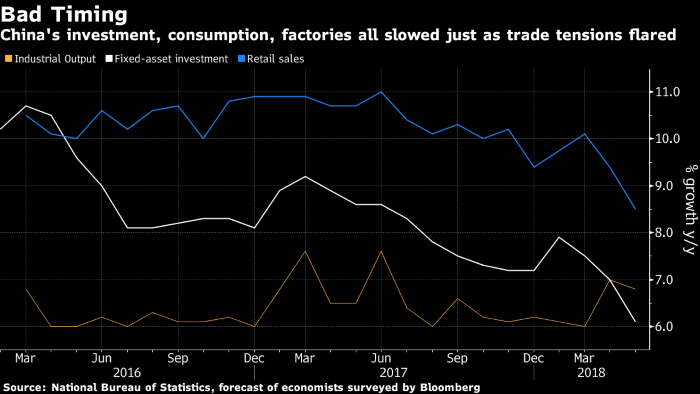 The impact is forecast to be moderate for now, with the median estimate of economists for output growth at 6.5 percent this year, in line with the goal. There might even be a temporary boost to second quarter data, as exporters may have attempted to sell more before the imposition of tariffs.

The world’s second largest economy may have expanded 6.7 percent in the second quarter, according to economists Bloomberg surveyed ahead of next week’s data. That’s just a little slower than the 6.8 percent gain in the first three months of the year. Exports probably grew a healthy 9.5 percent from a year earlier in June, before the two nations started to levy an additional 25 percent tariff on more than $30 billion in goods.

Adding duties on another $200 billion in imports from China could meaningfully increase the effect of the trade war. An early gauge of export orders at Chinese factories already tumbled into contraction last month, and a full-blown global trade war would shave 0.4 percentage point off world growth, according to Bloomberg Economics.

Changing Behavior
Trump’s push to ever-higher tariff threats is causing behavior changes more than 8,000 miles from Washington. While the impact is modest still, and companies are wary of divulging their plans publicly, many are reckoning with the new reality.

A Shenzhen-based Wi-Fi equipment maker is looking to divert sales to Southeast Asia to try to maintain its goal of 20 percent growth this year. The company shipped 40 percent of 200 million yuan ($30 million) in total production to the U.S. in 2017, according to Lyu Hui, the sales manager, who asked that the company’s name not be used.

In the same city, Shenzhen BCLH Science & Technology Co. chose to forgo a price rise to cover the tariffs, and effectively cut U.S. profits to near zero, in the hope that the trade war is short. The producer of chemical compounds used in electronics only ships 10 percent of its product to the U.S., but had wanted to expand there, according to Mr. Ma, a sales manager who only gave his last name.

Smaller exporters will be hit particularly hard by the tariffs, according to Cao Yishan, a credit research analyst at PIMCO Asia Ltd. in Hong Kong, as they can’t pass on the costs through price rises or by shifting production elsewhere like their bigger counterparts can.

Consumers Hurt
Consumers are also facing a different set of choices. Considering price rises are retailers such as Pinxian Cuisine, which sells imported meats including American beef online, and Carlo Rossi, a dealer of Californian wine.

While summer is usually the peak season to export U.S. lobsters to China, the “crazy” 25 percent tariffs could drive customers to Canadian suppliers, according to Justin Oakes, a business development manager for North America at Gfresh, an online Chinese seafood marketplace.

While the tariffs already implemented will only cost China about 0.1 to 0.2 percentage point of economic growth, the potential escalations may deepen the impact to 0.3 to 0.5 percentage point, according to PIMCO’s Cao.

That will be more painful coming on top of the slowdowns in investment, factory output and retail sales. The tight credit tap will also subtract from infrastructure and property investment for the rest of the year, as local governments cut borrowing and property developers have less access to shadow financing channels.

China does have options for stimulus, with monetary easing or a faster pace of fiscal spending this year on the menu. However, those come with risks and costs.

“The tension has turned into an economic conflict and is not bound by trade,” said Raymond Yeung, chief greater China economist for Australia & New Zealand Banking Group Ltd. in Hong Kong. “My worry is that the government may shift its policy priority to growth over reform, dragging the pace of China’s structural transformation.”
Source: Bloomberg