China is expected to tighten coal import controls in the second half of the year if regulators are able to stabilize domestic prices, potentially weakening the global market as the top buyer eases demand.

Authorities will seek to cap imports at, or even below, last year’s level of 281 million tons, according to estimates from six analysts including at China’s leading coal industry group and Noble Resources International Pte. Inbound shipments through the first five months of 127 million tons are 5.6% higher than the same period in 2018.

This means imports could shrink in the second half, said Zeng Hao, an analyst at consultancy Fenwei Energy Information Services Co. China has a tendency to suppress quotas later in the year, prompting buyers to load up on purchases before that, he said.

As the world’s biggest user and producer of the fuel, China often manages its domestic market by adjusting imports. It suspended custom clearance in the final two months of 2018 to fulfill a cap on annual shipments. After prices rose this year due to stricter scrutiny of local mines, major power plants appealed to the government to help cut coal costs. 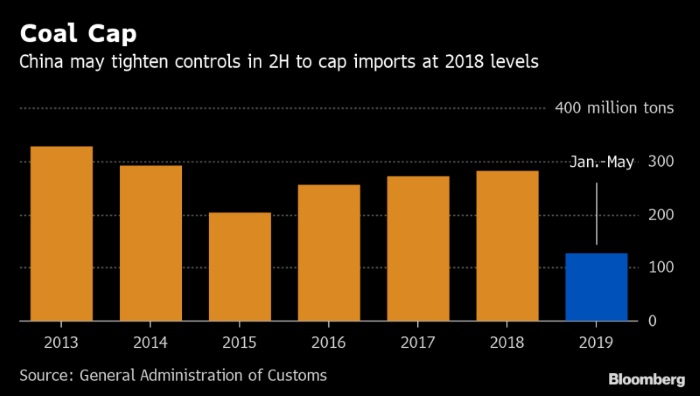 “If prices are too high at home, China will import more,” said Tian Miao, an analyst at Everbright Sun Hung Kai Co. in Beijing. “Import control is kind of a dynamic process. The country’s first and foremost priority is securing coal supply and ensuring prices are stable at reasonable levels.”

Spot coal at Qinhuangdao port has held firmly this year above a range of 500 to 570 yuan a ton favored by the government. With major utilities under pressure to deliver a cut to power prices, the nation’s top economic planner proposed bringing prices down to less than 600 yuan.

China’s acceptance of higher imports in the past few months could stem from its plan to tame prices, said Tian. While authorities have moved to delay clearance of Australian coal amid strained relations between the two, the slowdown is offset by cargoes from elsewhere, particularly Russia where May shipments reached a record-high.

The top buyer’s appetite for overseas coal may stay bolstered in the near term as peak consumption season rolls around. The National Development & Reform Commission has emphasized the need for stable power supply this summer and urged utilities to build up adequate stockpiles. A slump in Asian seaborne prices could also make imports more attractive, with the benchmark Newcastle coal near the lowest since 2016.

Over 2019, shipments may be flat or down slightly, partly because domestic output is likely to be strong, Rodrigo Echeverri, head of research at Noble Resources International, said at a conference in Bali this week. Production may rise by more than 100 million tons this year, the national coal association estimates, potentially crowding out imports.

Ultimately the government will want to secure demand for domestic production, according to Tian. “Once prices retreat to a reasonable level in the second half, we’ll see China tighten its grip on imports,” she said.
Source: Bloomberg