Chinese refineries lifted their gasoil production yield to one-year high of 23% in September, and the rate was likely to rise further in coming months in a bid to ease a domestic supply shortage, refining sources told S&P Global Platts Oct. 22.

However overall gasoil production was still down 1.7% month on month at 12.92 million mt (3.21 million b/d) in September, and down 2.3% year on year, amid a reduction in the country’s crude throughput, National Bureau of Statistics data released Oct. 21 showed.

China’s crude oil throughput fell 0.7% month on month to a 17-month low of 13.7 million b/d in September amid a slowdown in the economy and product destocking. Gasoil output accounted for around 23% of the total volume of crude refined in the month, a one-year high.

“We will lift gasoil yield and further process wax oil and residuals to meet strong domestic demand and suspend exports, as our planned throughput volume is capped,” a refining source with Sinopec said.

Refining sources with the other state-owned oil giants reported similar plans in the wake of Beijing’s recent call for national energy companies to guarantee energy production at all costs, including market intervention.

China had been trying to lower its gasoil output yield for many years to as low as 21% in June due to the weakening long-term consumption outlook for the conventional fuel. The most recent high for its gasoil yield was 25.3% in July 2020, NBS data showed.

However, the country has been short of gasoil since September, during a typical peak season for gasoil consumption, despite power rationing that is estimated to reduce domestic demand by about 100,000 b/d, Platts has reported.

“Lifting gasoil yield is likely the first step for China to make up the shortage, as it is unlikely to see a significant increase in crude throughput due to high crude prices and limited crude import quota availability,” a Beijing-based analyst said, adding that product and blending material imports were too low to boost supply.

China’s gasoil output was estimated to rise 240,000 b/d in the fourth quarter from Q3, while crude runs were forecast to rise 137,000 b/d over the same period, but still be down 276,000 b/d year on year, according to S&P Global Platts Analytics.

Market sources said Beijing had only released 400,000 mt of import quotas for gasoline and gasoil in 2021, and the allocations were almost exhausted.

Meanwhile, imports of a blending material light cycle oil remained at a low 301,131 mt in September despite rising 34.9% month on month, General Administration of Customs data showed. China’s LCO imports hit record high of 2.08 million mt in April before slumping due to Beijing imposing a hefty consumption tax on LCO imports from June 12. 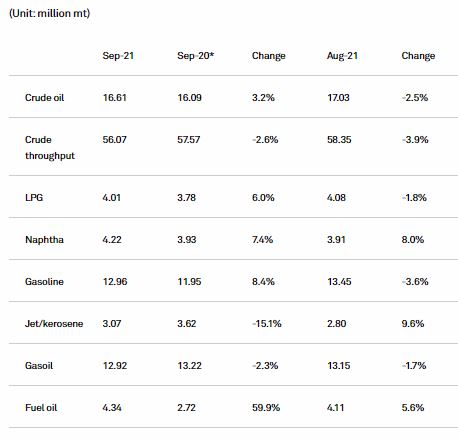 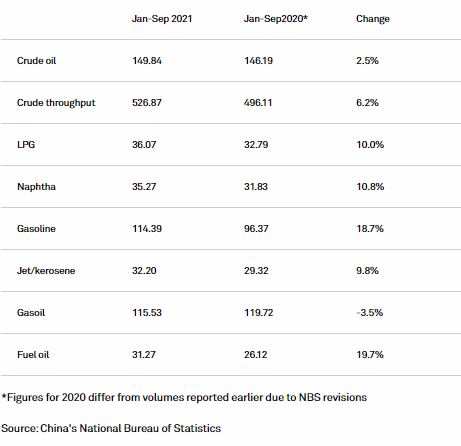