China’s demand for crude oil shows no signs of abating.

There are currently more supertankers bound for the Asian nation than at any time since the start of 2017 and possibly longer. That could signal that China’s refineries are planning to run hard through the end of the year when the shipping industry is moving to cleaner fuel standards. China could also be working to secure supply following recent tensions in the Middle East. 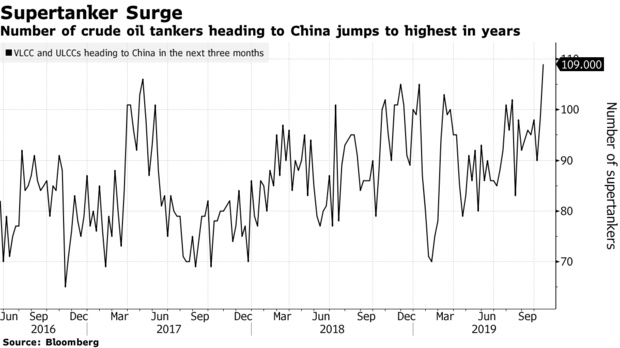 Most of the 109 supertankers observed heading for China in a recent Bloomberg tanker-tracking survey should arrive within the next three months. That coincides with a global switch to less polluting fuels in shipping that’s referred to in the industry as IMO 2020. Those guidelines, set out by the International Maritime Organization, are set to boost demand for refined products such as diesel, potentially keeping refining runs high.

The survey on Oct. 18 showed that almost a quarter of all supertankers underway globally were bound for China, based on movements of Very Large Crude Carriers, and Ultra Large Crude Carriers. The figure is the highest since Bloomberg started counting those types of ships together at the start of 2017.

“Following a deep and extended refinery maintenance season, refinery runs are rising significantly, especially with IMO 2020 only a few short months away,’’ said Randy Giveans, an analyst for Jefferies LLC, when asked about China. 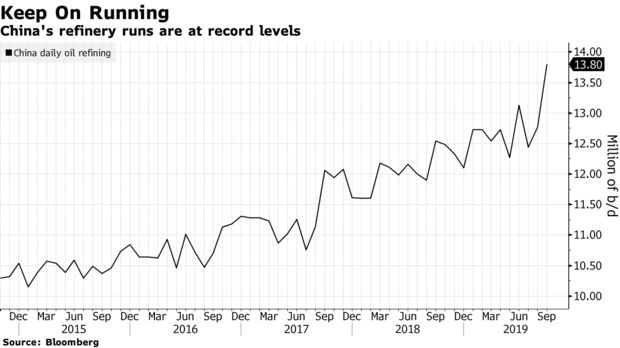 China has been boosting its capacity to refine crude oil in recent years, with processing volumes rising to a record last month. Demand is only set to increase in the short term, with the completion of the Hengli and Zhejiang megarefineries on its east coast. Recent tensions in the Middle East may have prompted some buying among refiners, according to Giveans.

“More tankers are headed to the Far East as China — and other Asian nations — are building inventories as a result of the recent attacks in Saudi Arabia and tensions in the Middle East,” said Giveans. The attacks have led to uncertainty about supply, he said.
Source: Bloomberg

2019-10-24
hellenicshippingnews..
Previous: Waning demand across vessels drags Baltic index to over 2-week low
Next: Shippers shine torch in every corner as pressure to cut CO2 grows