China Has More Distressed Corporate Debt Than All Other EMs

In the span of just 11 months, China went from having no distressed dollar-denominated corporate bonds to having more than any other emerging market.

The world’s second-biggest economy has 15 bonds whose option-adjusted spreads over U.S. Treasuries were above 1,000 basis points as of Nov. 6, according to a Bloomberg Barclays index. That’s more than all the other nations on the gauge, combined.

An ongoing trade war and slower economic growth after years of breakneck expansion are straining the nation’s highly-leveraged corporate sector. Property developers in particular are facing surging borrowing costs as refinancing pressures intensify amid the government’s effort to rein in real estate prices.

-At least four property-related firms defaulted on debt this year, and investors are bracing for more
-China Evergrande Group, the country’s second-largest builder by sales, priced a dollar bond at 13.75 percent last week, the highest interest rate it has ever paid on a dollar issue, according to data compiled by Bloomberg

China’s debt, both distressed and otherwise, account for a quarter of all securities included in the gauge, which tracks about 660 dollar notes with a par value of at least $500 million. The Asian nation is home to the developing world’s biggest bond market. 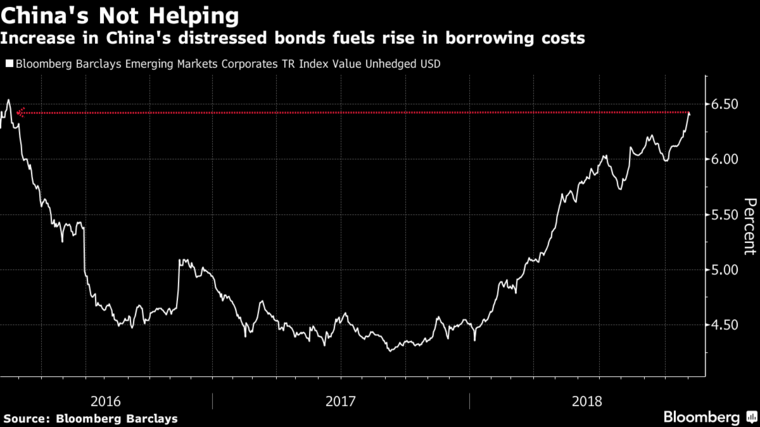 The jump in China’s distressed bonds helped fuel an increase in borrowing costs for emerging-market companies to the highest level in more than two years. The impact of the trade war on the Asian nation has compounded pressure on developing assets, already reeling under the strain of higher U.S. interest rates and Treasury yields.

Brazil has the second-highest number of distressed bonds, with three in the index. Jamaica and Russia are tied in third place with two securities each. Debt is typically considered under pressure if its spread above the risk-free rate is 1,000 basis points or more.

There are also a growing number of corporate notes whose spreads are gradually entering the danger zone. This year, there are 12 bonds on the Barclays Bloomberg index whose option-adjusted spreads were between 800 to 999 basis points, up from two at the end of 2017.

The Bloomberg Barclays gauge of emerging-market corporate bonds rose for a fifth day on Wednesday, cutting the average yield to 6.38 percent. The rate had climbed following a low of 4.26 percent in September 2017.
Source: Bloomberg