Dryad has received reporting indicating that China has raised the security level for Chinese-flagged vessels heading through the Strait of Malacca to the highest threat warning available, MARSEC Level 3. This reporting has been verified, and was released in an official statement from the Chinese Ministry of Transport. The threat warning advice was applied as at 2 Jul 19, 2200 hrs UTC. A deadline for the heightened threat level has not yet been released.

The raising of the threat level for Chinese-flagged vessels has been unexpected, particularly as the regional dynamics within and surrounding the Malacca Strait are stable. Within the region, the nature of piracy has often been low level, and has involved the boarding of small barge craft for items such as scrap metal. It would therefore be a dramatic escalation were a Chinese vessel to be targeted, and there is currently no reporting to indicate that local groups involved in piracy possess the intent or capability to employ a new MO in this manner. The last significant incident within the region was the Johor Port dispute between Malaysia and Singapore, however there are no significant geopolitical tensions which would link logically with the increased Chinese threat level. Sources have indicated that China may have raised threat levels due to a specific threat of criminality, in this instance linked to cargo theft, but there is no indication that this poses a wider threat to commercial vessels. Further reporting from local media sources has indicated that the threat posed to Chinese vessels may be Indonesian in origin. Currently no details has been given as to the type of threat emanating from Indonesia and/or piratical groups operating within Indonesia, therefore this line of assessment is currently believed to be unlikely until corroborated by further reporting.

Dryad currently assesses that there are no regional narratives or emerging threats which would support the Chinese decision. It is likely that China is reacting to a specific threat known only to China. It must also be noted that China holds international responsibility, as with other maritime partner nations, to communicate and disseminate any specific threat information it holds, which in this instance it appears to not have done. There is currently no reporting stream which indicates a specific threat to Chinese vessels, and Dryad is currently content to recommend that we do no believe that MARSEC Level 3 is a necessary requirement for other vessels transiting the Strait of Malacca. Dryad will continue to monitor the situation, and will report any further details which emerge when necessary. 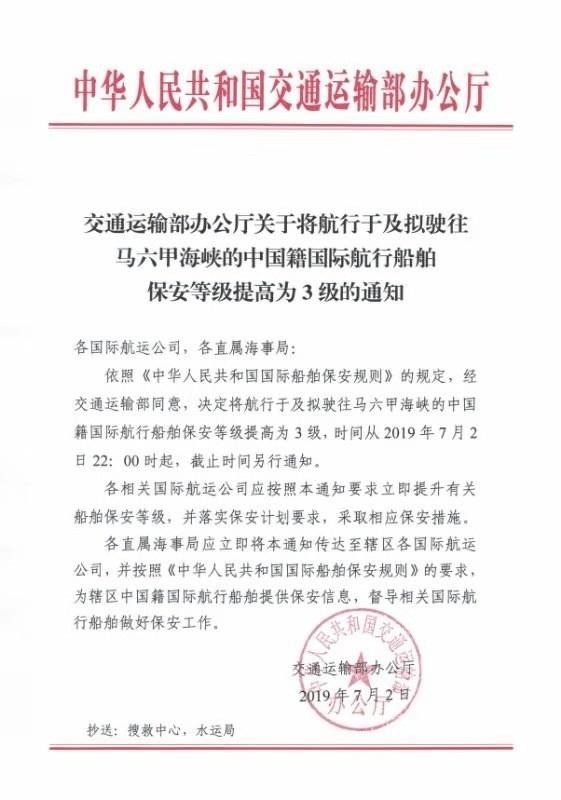 Translation:
All international shipping companies and their respective maritime bureaus: In accordance with the provisions of the International Ship Security Rules of the People’s Republic of China, with the consent of the Ministry of Transport, it was decided to increase the security level of Chinese ships sailing on and to the Straits of Malacca to Level 3, from July 2, 2019. From 22:00 onwards, the deadline will be announced separately. All relevant international shipping companies shall immediately upgrade the relevant ship security level in accordance with the requirements of this notice, and implement the security plan requirements and take corresponding security measures. Each directly under the Maritime Safety Administration shall immediately communicate this notice to the international shipping companies in the jurisdiction, and provide security information for the vessels of Chinese nationality sailing in the jurisdiction in accordance with the requirements of the International Ship Security Regulations of the People’s Republic of China, and supervise the relevant international ships to do security work. . General Office of the Ministry of Transport July 2, 2019″
Source: Dryad