China Is Walking a Monetary Tightrope as Trade War Plays Out

Policy makers in Beijing are trying to funnel cash into the economy while warding off a re-inflation of the property market bubble, a task made doubly hard by the uncertainty generated by the intensifying trade war.

That tightrope act has become more evident in the past couple of days, with further steps taken to curb lending for mortgages even as the central bank tries to increase credit available to small businesses, the private sector and manufacturers.

The People’s Bank of China is leaning on commercial lenders not to reduce home mortgage rates, amid signs that the traditionally frothy sector is poised to take off again, according to people familiar with the matter.

At the same time, a report by the central bank released Thursday soft-pedaled a campaign to rein in risks in the banking sector, amid jitters caused by the seizure of regional lender Baoshang Bank Co. a month ago.

All of the government’s efforts to manage its domestic conundrums could be thrown into turmoil if the outcome of the high-stakes encounter between President Xi Jinping and President Donald Trump this weekend leads to a re-escalation of trade war tensions. That could put supporting growth front and center of the Chinese domestic agenda again.

“Easing and tightening may co-exist, and it depends on where you look at”, said Betty Wang, senior China economist at Australia & New Zealand Banking Group Ltd. in Hong Kong. She said policy makers need to balance economic growth with debt management, which means expansion won’t be achieved by sacrificing too much on issues such as risk control.

Authorities have recently unleashed an array of subtle measures to cool the property sector, such as curtailing developers’ fundraising to limit what they can pay for land. Stimulus measures aimed at fostering investment and consumption can often end up in an unwanted inflow of cash into real estate. 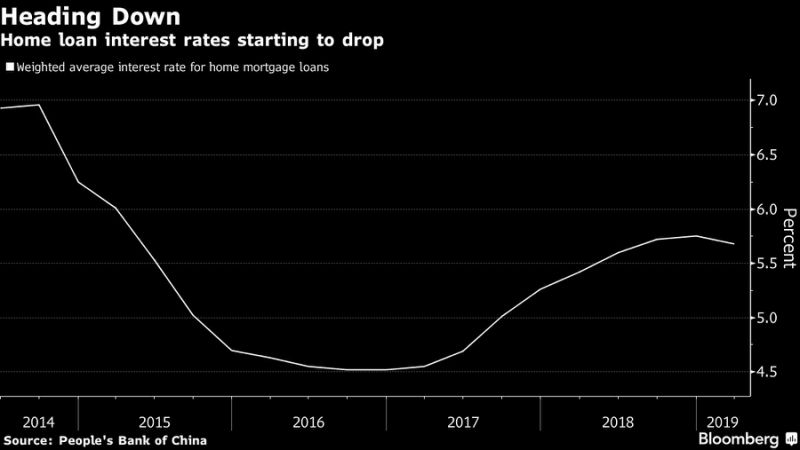 Another warning sign is the $7.4 trillion pile of household borrowing, which touched an historical high last month. On the back of a boom in property prices, household debt has been climbing for 10 years straight, at a pace that rivals any such run-up in major economies. Guo Shuqing, the head of China’s banking regulator, has warned of debt reaching an unsustainable level for some households.

That makes the global shift to monetary easing prompted by the U.S. Federal Reserve a double-edged sword for Chinese policy makers. On the one hand, the prospect of looser monetary policy globally helps China support growth at home. On the other, it makes controlling debt risks harder.

The central bank will likely follow the Fed toward easing if the U.S. cuts rates later this year, according to Citic Securities analyst Ming Ming. Economists also forecast a bigger chance for the PBOC to lower market borrowing costs in the third quarter than they did last month, according to economists surveyed by Bloomberg.

With or without a trade war, policy makers need to tackle slowing investment and sluggish consumer sentiment. Early indicators for June point to renewed softening in growth, indicating that tax cuts and other supportive measures are feeding through only slowly.

After a year of targeted monetary easing, small firms are still struggling to get funding, according to a survey by the PBOC. Should the issue persist, it could impact the job market and further damp consumer sentiment, testing policy makers’ constrained manner toward easing.

“The authorities will likely refrain from major policy shifts for now while making only small tweaks” because debt containment remains a focus highlighted by the Politburo at its meeting in April, said Larry Hu, chief China economist at Macquarie Group Ltd. in Hong Kong. Any major changes in stance will have to wait until the end of the year, he said.
Source: Bloomberg

2019-07-01
hellenicshippingnews..
Previous: A recession in Germany could mean economic damage for these countries
Next: Yuan, dollar gain and safe-haven currencies shrivel after U.S.-China trade truce