China may this year become the Asia and Middle East third-biggest PP exporter, replacing Singapore. In 2020, China was nowhere in sight

As recently as 2020, china’s polypropylene (pp) exports totalled just 424,746 tonnes, causing what must have been barely a ripple of anxiety among the major asian and middle east exporters. But as the slide below shows, in 2021, China moved into the group of top exporters as its exports surged to 1.4m tonnes.

Nobody should be surprised because the trajectory has been clear since 2014 due to a big shift in government policy. In that year, Beijing became determined to push much harder for chemicals and polymers self-sufficiency in general.

The main motives were reducing dependence on what Beijing worried could be uncertain import availability due to changing overseas sales investment priorities and shifts in geopolitics, and the need to escape China’s middle-income trap through growing a higher-value industry. 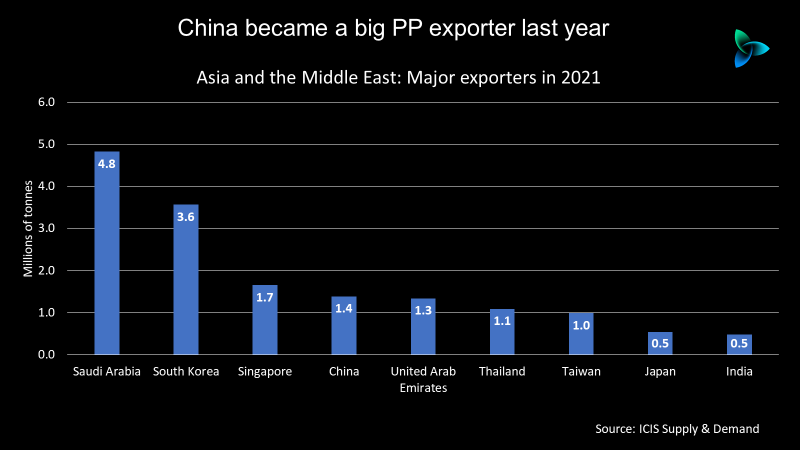 For some products, it was thought that China could shift from being a major net importer to being a net exporter, thereby boosting export earnings. This soon happened in purified terephthalic acid (PTA) and polyethylene terephthalate (PET) resins.

PP seemed an obvious candidate for eventual complete self-sufficiency, more so than polyethylene (PE) because you can make propylene feedstock in several cost-competitive ways, whereas to make ethylene you need to spend billions of dollars on building a steam cracker. 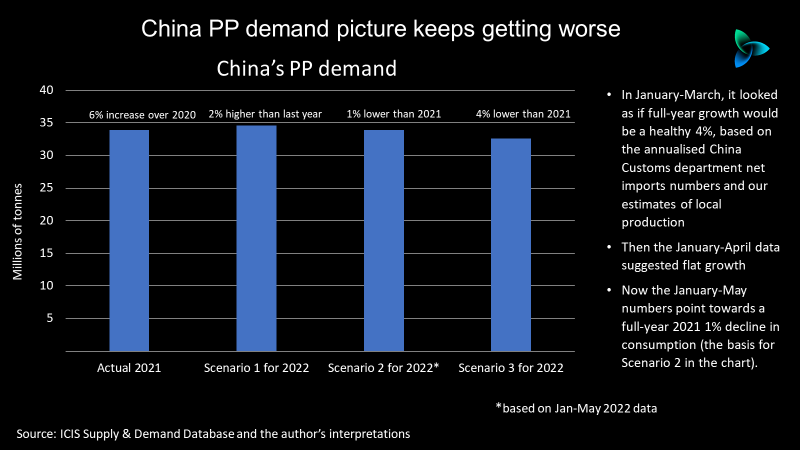 The January-May 2022 China Customs department data for China’s PP exports when annualised (divide by five and multiply by 12) suggests that China’s full-year 2022 exports could rise to 1.7m. Given that there are no capacity expansions scheduled for Singapore this year, China may end up challenging the city state for third spot among the big Asian and Middle East exporters. 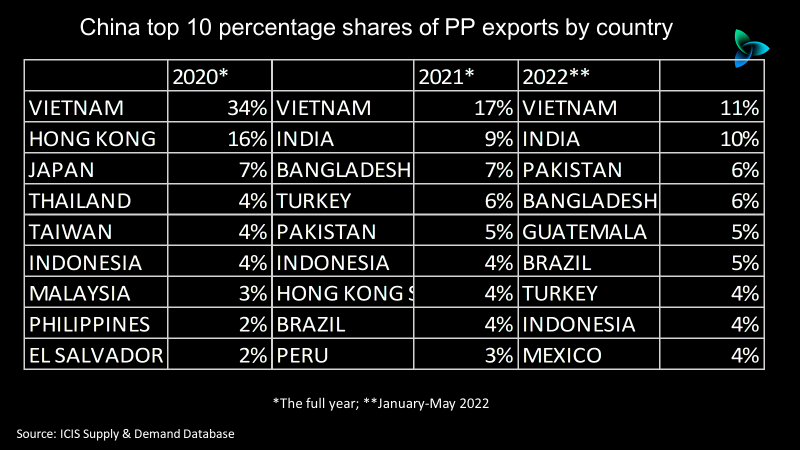 This year might be different, though, because local demand remained very weak in May as the updated charts below tells us. We might see continued month-on-month increases in exports during the remainder of 2022. Let me explain why.

Operating rates may rise if demand gets even weaker

In January-March 2022, on annualised basis again (divide by three and multiply by 12), it looked as if China’s consumption would grow by 4% during the full year. Then in January-April, the data suggested flat growth and now January-May indicates a 1% decline.

As usual, the above chart provides you with three scenarios for full-year 2022 demand. Scenario 1 is a best-case outcome of plus 2% growth, Scenario 2 – based on the January-May numbers – is minus 1% and Scenario 3 is minus 4%. 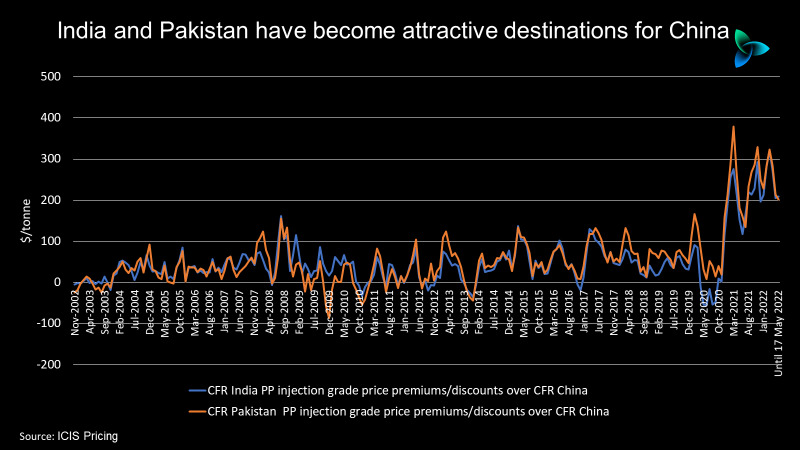 What will help us detect what is really happening with the economy – as I discussed in my 22 June post – is what happens next with China PP and polyethylene (PE) spreads over naphtha.

Up until the week ending 17 June this year, PP and PE spreads remained close to their lowest levels since we started our price assessments in November 2002. Chemicals and polymers spreads over feedstock costs have always been one of the best guides to the strength of any economy.

The macro-economic data in China is extremely mixed. A lot will hinge on whether China is able to continue relaxing severe lockdowns, its zero-COVID approach to coronavirus.

If the economy gets worse, do not assume that PP operating rates will remain as low they appear to have been in January-May. Our assessment of local production points towards a full-year 2022 operating rate of just 78% compared with our estimate for this year of 82%. 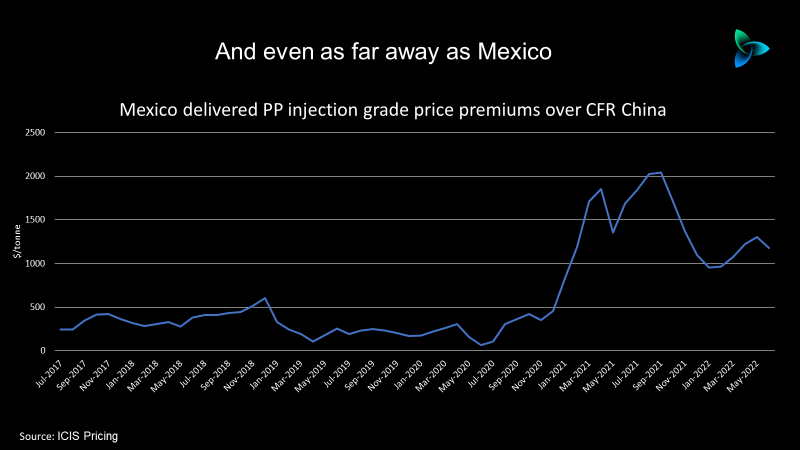 Aggressive rate cuts at Chinese plants have taken place to try and reverse weak margins in northeast Asia for naphtha and propane dehydrogenation-based PP producers, with limited success to date. And perhaps some of the 4.7m tonnes/year of new PP capacity due online this year will be delayed.

But a fall in the value of the yuan versus the US dollar may spur a bigger export push through higher operating rates and new plants coming onstream on schedule. It also worth noting that most of China’s new capacity is “state-of-the-art” – world-scale and with access to competitively priced feedstocks.
Watch the value of the yuan versus the dollar, which has declined so far in 2022. And watch the differentials between Chinese and overseas PP prices, as the differentials will be another big driver of China’s export trade during the rest of this year. 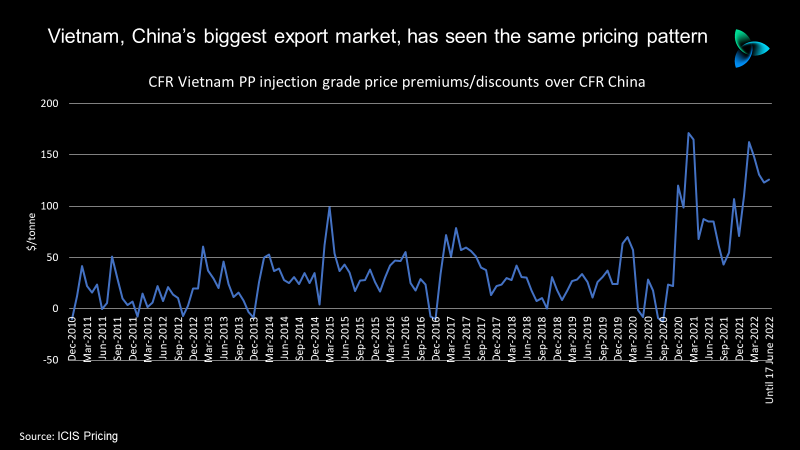 Overseas PP prices at record premiums to those in China

Before we look at the extraordinary shift in PP price differentials between China and other countries since January 2021, it is worth considering the above chart. What you can see are the percentage shares of Chinese total exports by country during the full years 2020 and 2021 and in January-May 2022.

Vietnam remained in pole position because China has a free trade agreement with Vietnam, meaning Vietnam’s imports of Chinese PP carry no duties. But Vietnam’s percentage share of total China exports has declined.

Meanwhile, destinations new to the top 10 were Bangladesh, Brazil, Guatemala, India, Mexico, Pakistan, Peru and Turkey. This tells us that China has expanded its export net wider, resulting in a bigger presence in south Asia and South & Central America. 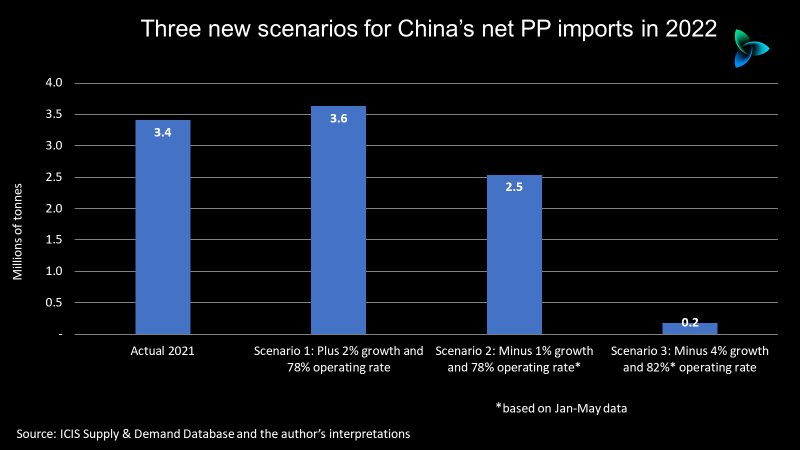 ICIS price assessments for a selection of the above new top destinations explain this shift in trade flows. Let us start with India and Pakistan.

We can see the same patterns in Turkey, Brazil and Peru PP pricing versus China PP pricing.

Here is another chart comparing Mexico and China PP pricing.

Let’s not forget Vietnam which remains China’s biggest destination. Despite Vietnam pricing coming under downward pressure because of exporters selling cargoes not wanted in China to Vietnam – as I again discussed in the 22 June post – China has still become much cheaper than Vietnam.

These price differentials tell the story of a weaker Chinese economy, the big rise in northeast Asian capacities, and, unless you have access to contracted container freight space, or you can work the spot market extremely well, the difficulty in shifting oversupply to other regions because of the surge in container costs and lack of containers space.

Conclusion
The old comfortable PP world of constantly strong China growth no longer applies. Neither does China’s small position in export markets. And to flip this around, the January-May 2022 data suggest that China’s imports may fall to 4.2m tonnes from last year’s 4.8m tonnes and 2020’s 6.6m tonnes.

And see my chart below, showing my latest scenarios for China’s 2022 net imports (imports minus exports). In the worst-case outcome, this year’s net imports could fall to approximately 200,0000 tonnes. This is unlikely, but a net import position of this size during the next few years seems a strong possibility.

This other side of the coin, of a shrinking China import market, is heaping further pressure on the big PP exporters because China used to be the world’s biggest import market. As recently as last year, it accounted for more than 40% of global net imports among the countries and regions that exported more than they imported.

What are the answers? The use of ICIS data and market intelligence to mitigate the damage. And for the buyers of PP, events in China represent an opportunity that they can again seize by making use of ICIS data and analysis.
Source: ICIS By John Richardson, https://www.icis.com/asian-chemical-connections/2022/06/china-may-this-year-become-the-asia-and-middle-east-third-biggest-pp-exporter-replacing-singapore-in-2020-china-was-nowhere-in-sight/