A remarkable maritime event occurred recently. China became the world’s second-largest shipowning country, overtaking Japan. The top shipowner, Greece, is still much larger but the gap is closing as China’s fleet expansion continues at a rapid rate. Numerous giant ore carriers, tankers and container ships scheduled for delivery to Chinese owners in the months and years ahead are likely to further boost capacity.

Strong and accelerating growth in the China-owned merchant ship fleet has unfolded. In 2017 an increase exceeding 9 percent was seen, and recent signs suggest that this year’s annual rise could be similar. The extensive orderbook for new vessels due to be delivered through the next two or three years will add substantial tonnage, but other less predictable influences also will determine fleet growth.

Many new ships will be employed in long-haul international trades where China is the cargo importer or exporter. For container ships, cargoes both to and from China are likely to provide employment while, for bulk tonnage in the biggest size categories, import trades will be most prominent. Amid vast quantities of manufactured goods and bulk commodities moving, potential for further participation of China-owned ships is clearly visible but, on some trade routes, other nationalities’ ships may be displaced. 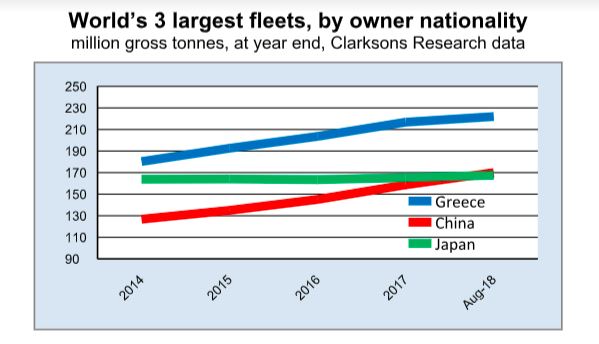 China’s fleet comprised 7,744 ships totalling 170 million gross tons at the end of August this year, above Japan’s 167.6m gt. The Greek fleet total was 222m gt. Gross tonnage is used in these statistics as a common ship capacity measure for all vessel types. China’s fleet has expanded by 34 percent since the end of 2014, compared with 23 percent growth for Greece. Japan has seen only a slow 2 percent rise over the same period.

Notable ships delivered
At the end of last year orders at shipbuilding yards for new vessels to be delivered to China-based shipowners comprised a huge volume. The 25.5m gt total, according to Clarksons figures, was equivalent to almost 17 percent of the existing China-owned fleet as calculated then. Within this orderbook a large proportion was scheduled for delivery in 2018, and a striking feature was the numerous orders for the biggest bulk carriers, tankers and container ships. Many of these newbuildings already have been completed and begun operating in the first eight months. The remaining September-December period, continuing into next year and later, is likely to see more ships delivered.

One especially notable feature beginning this year is the start of the second valemax ore carrier programme. Among bulk carriers, these are the largest in existence, with a 400,000 deadweight tonnes capacity, well over twice the capacity of the standard capesize vessel which is often the maximum size participating in most trades. China-based companies ordered 30 valemaxes, of which 18 totalling 7.2 million dwt were due for delivery during 2018, and 10 appear to have been delivered in the first eight months followed by an additional ship this month.

Mammoth container ships are another prominent feature in the orderbook, with many scheduled for delivery in 2018. It appears that 11 ultra-large vessels with the greatest capacity currently existing are due to be delivered this year, in the 19-21,000 teu (twenty-foot equivalent unit) range, all ordered by Cosco Shipping. In the tanker sector orders for vlccs (very large crude carriers) are at the forefront. The scheduled 2018 deliveries comprised 9 ships of 310,000 dwt for China VLCC, a China Merchants subsidiary, and 2 of 308,000 dwt for CSG Tanker Dalian.

Large newbuilding orderbook
The orderbook for new ships stretches out through the next two years and later. According to the Clarksons data, September-December 2018 deliveries scheduled, of all types and sizes of ship, total 4.8m gt, followed by 9.9m gt in 2019 and a further 6.1m gt in 2020 and beyond. The entire orderbook for China-owned vessels, at end August 2018, amounts to 20.8m gt which is equivalent to 12 percent of the country’s existing fleet capacity.

Compared with the other two largest owner nationalities, China has a more extensive orderbook than Greece which has a 16.9m gt total, equivalent to under 8 percent of the current fleet. Japan has the number one orderbook totalling 25.1m gt, amounting to 15 percent of its current fleet.

Looking ahead to next year’s and later deliveries, numerous mega vessels in the bulk carrier, tanker and container ship categories are set to augment the China-owned fleet. In 2019, the valemax 400,000 dwt ore carrier fleet will be expanded by the scheduled addition of 10 ships for owners based in China, followed by 2 in 2020. A further 4 vlcc tankers in the 308-310,000 dwt size range are listed for 2019, with a similar number in 2020-21. There are 6 ultra-larger boxships on order for 2019 delivery, reportedly postponed from this year.

Among other big vessel categories, two owners in China will take delivery of 6 guaibamax 325,000 dwt ore carriers starting next year when two will be completed. Another bulk carrier category is newcastlemax 208,000 dwt vessels, 3 of which are due for delivery to owners in China in 2019, followed by a further 7 in 2020-21. In the tanker sector, 3 suezmax 158,000 dwt vessels are scheduled for 2020-21 delivery. Also, three 172,410 cubic metre liquefied natural gas (lng) carriers are scheduled over the next two years.

Promising employment
One significant aspect in a global shipping market context is the employment patterns of the new China-owned vessels. Many new ships, especially those in the largest size categories, are likely to be employed in trades where China is at one end of the route, either as the cargo importer or exporter. However, while this activity may form the majority of employment, some ships may be occasionally utilised in trades where China is not involved as a voyage destination or origin. These are the traditional international ‘cross-trades’.

A full analysis of newbuilding vessels’ employment is not feasible, owing to limited information about intentions or contract details. Also, evolving global freight market conditions can be expected to have an impact on employment arrangements, resulting in changing perceptions over extended time periods about trades in which to participate. Nevertheless, in some cases such as the mega-size container ships, the most likely deployment and trading patterns are fairly obvious from a review of the market for this tonnage.

For the new giant valemax ore carriers, there is clarity about their intended usage both in the period immediately ahead and in the longer term future. In all cases, lifespan charters for the thirty newbuildings of this size now being delivered were agreed when the orders were placed in early 2016. The charterer is Brazilian mining company Vale and employment of these vessels starting 2018 or later, after delivery from the shipbuilders, is on a contract of affreightment (coa) basis over a period of 27 years. It seems clear that the principal trade route will be Brazil to China carrying iron ore, although other destinations are likely.

During recent months, one new valemax was on a route identifiable as loading in Brazil followed by discharging at ports in Japan. Another new ship of this type evidently discharged ore at the distribution facility at Teluk Rubiah in Malaysia. A further recent example of diverse trading patterns is a newly-delivered vlcc tanker arriving in Rotterdam, after being recorded at an oil loading port in the Arabian Gulf. This anecdotal information shows significant involvement of new China-owned shipping capacity, as well as the existing fleet, in broader global trading.

An aspect relevant to the introduction of the new vessels is growth in cargo volumes and ship demand within the trades where employment is assumed to be concentrated. For example, arrival of the new valemaxes this year has coincided with signs pointing to a slowing upwards trend in China’s iron ore imports. Seaborne iron ore trade is dominated by China’s more than two-thirds share of global imports. If this slackening trend persists, even if the proportion supplied to China by Brazil – the route on which valemaxes are employed – increases, the new ships may displace other nationalities’ vessels currently participating.

Upwards trend foreseeable
Newly constructed capacity is the most visible and transparent growth element in the China-owned fleet. Other influences determining the outcome are secondhand vessel purchases on the international market, sales of vessels to that market and existing tonnage sold to shipbreakers in China or other countries within the global ship recycling market. These transactions are usually more difficult to track and monitor comprehensively, and therefore overall estimates rely to some extent on guesswork.

Consequently forecasts of the China-owned fleet’s future growth are just a broad indication of the likely magnitude of changes. The longer ahead predictions stretch, the greater the uncertainty surrounding calculations. Evolving freight market trends and expectations could have significant effects on secondhand sales and purchases volumes, while scrapping decisions also could be affected by freight rate levels and market activity, especially when vessels are employed in international cross-trades where China is neither importer nor exporter of the cargo carried.

Nevertheless, despite these imponderables, it seems arguable that a foreseeable trend in the China-owned fleet is further substantial expansion over the next few years. China’s position as the world’s second-largest shipowning country probably will be consolidated.

Previous: Shipping Is Increasingly Caught In The Trade War Line Of Crossfire
Next: Demolition Activity Returns to Growth Mode