China’s attempts to preserve strengthened risk controls over the property sector without magnifying a growth slowdown illustrate the difficult trade-offs its policymakers are facing, says Fitch Ratings. Stress could spread to other parts of the economy and the financial system if policy easing is too cautious. However, a substantial loosening of credit conditions could raise system leverage and set back efforts to control financial risks.

Contagion has surfaced across parts of China’s homebuilding sector, triggered by the distress of Evergrande and aggravated by subsequent credit events involving other developers. The resulting market volatility has weakened near-term refinancing prospects and exacerbated liquidity strains for developers with weaker credit profiles and those more reliant on capital-market debt financing, even as spillovers to investment-grade issuers and the broader corporate sector have so far been limited.

These events are widening the polarisation of homebuilder credit profiles that we have signalled for a while, a trend that may prompt substantial consolidation in the sector. Rising uncertainty among prospective homebuyers will hurt sales in the near term, particularly of properties that are not yet completed. Financing strains could also weigh on the replenishment of project pipelines, as developers that do possess cash on hand may nevertheless opt to preserve short-term liquidity. 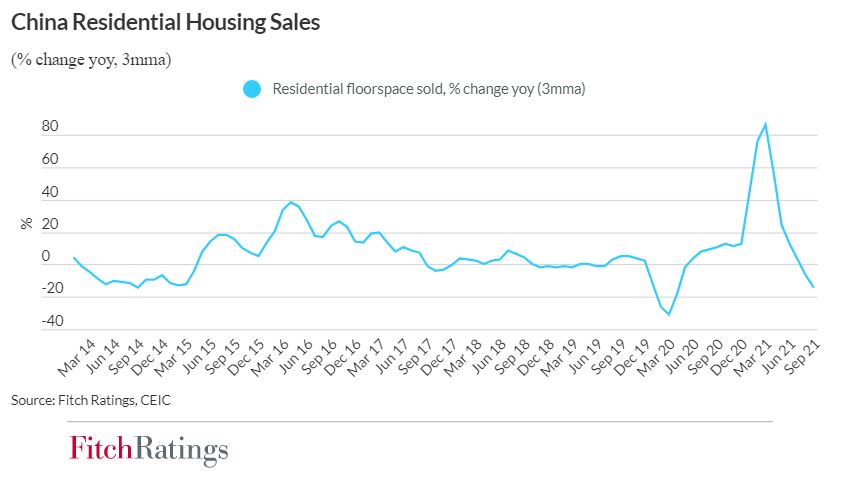 We had expected housing construction to moderate over the medium term in line with secular demographic trends. However, we believe other factors are driving the recent events, such as over-extension by some developers, reaction to a recent tightening in macro-prudential regulations over mortgage and property lending and the significant slowdown in credit growth this year. Therefore, we do not expect a sharp correction in house prices that might otherwise spark financial instability or depress medium-term growth.

The authorities have gradually eased macroeconomic policy settings in recent months to cushion a broader activity slowdown, but have thus far been tentative in responding directly to the property-sector stress. Officials have instructed banks to accelerate mortgage approvals, while cautioning that property should not be used as a conduit for short-term economic stimulus.

We believe the mounting pressure will lead the authorities to take further measures to accelerate credit growth before the year-end, including reserve requirement ratio cuts. They may also scale back the implementation of some property-related regulations. This may include easing the execution of caps on banks’ property-sector lending exposure, which, despite being subject to a two- to four-year transition timetable, already appear to be affecting credit allocation decisions. The “three red lines” and other measures to control developer leverage may also be tempered, even while they retain rhetorical value as part of government campaigns to improve housing affordability and rein in financial risks. 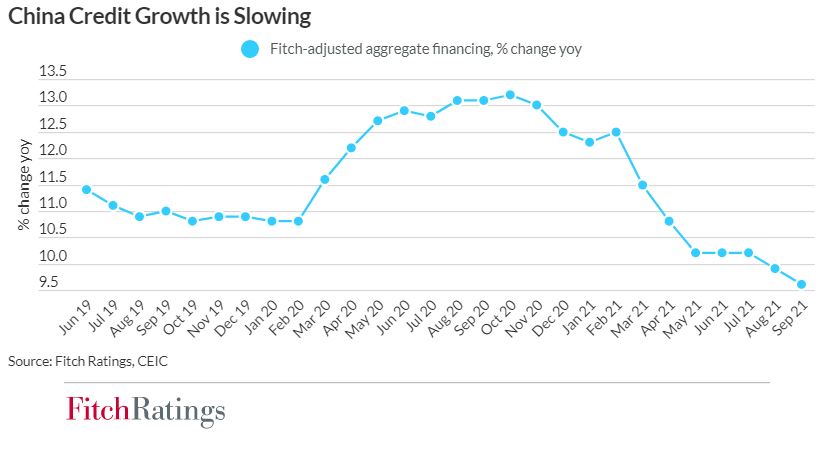 We believe our current growth forecasts of 8.1% in 2021 and 5.2% in 2022 remain broadly intact given our expectations of the policy response outlined above.

However, if policy moves are insufficient to bolster confidence, challenging refinancing conditions and subdued housing sales may persist for some time. This would not only introduce considerable risks to our baseline growth outlook, but could also aggravate macro-financial risks, in light of the real-estate sector’s hefty share in corporate borrowing and economic activity. State banks have manageable direct exposure to developers, but smaller banks could be at greater risk, in our view, especially those more focused on lending in lower-tier cities.

There is also a danger that policy could overcorrect, particularly if initial moves fail to shore up growth, though we think such an outcome is less likely. In such a scenario, aggressive credit loosening could add to system leverage, put downward pressure on China’s ‘A+’/Stable sovereign rating and weigh on the positive outlook on Chinese banks’ ‘bbb-’ operating environment score.
Source: Fitch Ratings