China raised the security level for its vessels heading through the Strait of Malacca, a key Asian trade route and major oil choke point.

The transport ministry advised Chinese-flagged ships to take heightened security steps and increased its security warning to level three, according to a copy of a July 2 notice posted on a website affiliated with the ministry.

Three is the highest security level in Chinese shipping regulations, and one above a warning issued after recent attacks on tankers in the Strait of Hormuz, according to people familiar with the situation, who asked not to be identified discussing government notifications. The ministry wasn’t immediately able to comment. 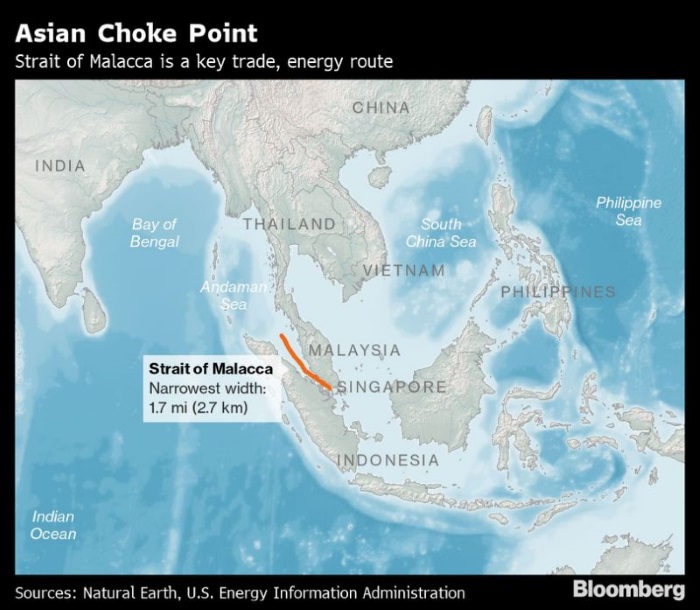 There was no reason given for the raised alert in the Strait of Malacca, a stretch of water passing Malaysia, Singapore and Indonesia that connects the Indian and Pacific oceans.

Second only to the Strait of Hormuz as a key oil and gas conduit, the Malacca Strait connects Middle Eastern and African energy supplies to Asian economies. China has emerged as the world’s biggest importer of crude and natural gas, making it increasingly reliant on supplies vulnerable to bottlenecks or disruption.

The warning from China comes after the string of attacks last month on tankers near Hormuz, which the U.S. blamed on Iran and heightened vigilance across the shipping industry.

“If the Strait of Malacca were blocked, nearly half of the world’s fleet would be required to reroute around the Indonesian archipelago,” the U.S. Energy Information Administration said in a 2017 report on oil transit choke points. “Rerouting would tie up global shipping capacity, add to shipping costs, and potentially affect energy prices.”

About 16 million barrels a day of oil and fuels in 2016 passed through the strait, which is about 1.7 miles (2.7 kilometers) wide at its narrowest point near Singapore, according to the EIA. The strait is also a popular site for traders to store millions of barrels of petroleum aboard tankers.

There were eight reported piracy and armed robbery incidents last year in the Strait of Malacca and near Singapore, according to ReCAAP Information Sharing Centre, which tracks attacks against ships in Asia.
Source: Bloomberg