On 26 September, soymeal prices in China surged 8% to CNY 5,500 (USD 739) per tonne compared to Monday last week. Following a jump in demand ahead of China’s national day on 1 October some crushers have had to stop production due to a shortage of soybeans. This could signal a recovery in imports after months of lacklustre demand and high soybean prices which have caused a 6.2% y/y drop in soybean imports so far in 2022.

Brazil’s soybean harvest in the first half of the year reached 126.0 million tonnes, down 9.7% y/y due to drought in the south of the country. A weaker harvest in the world’s largest exporter, coupled with rising feed grain prices due to the war in Ukraine, caused soybean prices to rise 14.6% y/y.

“This year’s soybean harvest in the United States is expected to be 5.2% larger in volume than 2021, which could help cool prices. Figures from the United States Department of Agriculture (USDA) for grain inspections for exports in September show an 18.3% y/y increase in volume, pointing towards a strong start for this marketing year,” says BIMCO’s Chief Shipping Analyst, Niels Rasmussen.

“This should aid the Panamax 5TC index which bottomed out at the end of August at USD 10,956 per day, before bouncing back to around USD 18,000 per day in the past couple of weeks.” 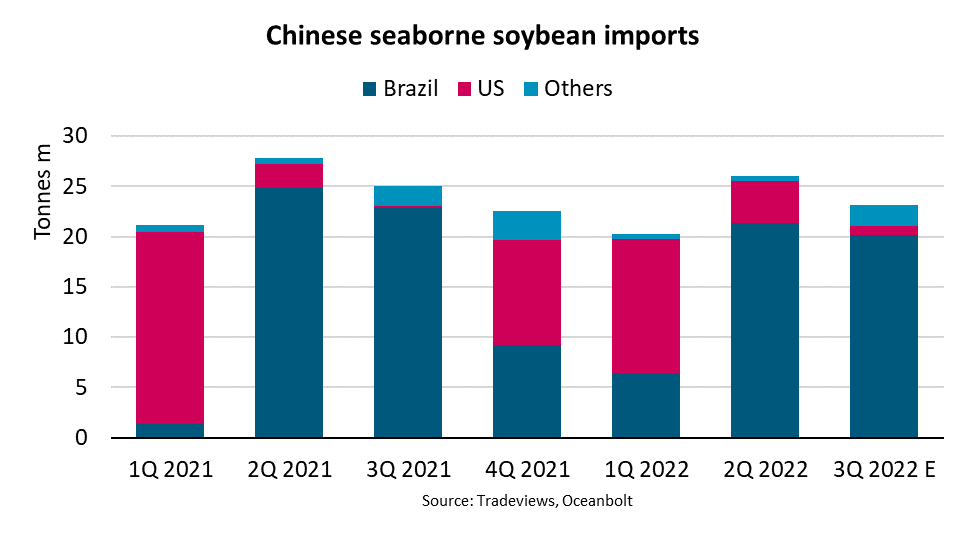 Last year, Argentina exported less than four million tonnes of soybeans to China but is currently also playing a significant role in the market. Around 3 million tonnes of Argentinian soybeans are now rumoured to be headed for China, after Argentina set a favourable currency exchange for soybean traders to boost exports.

China has for a long time wished to cut back soybean imports to improve food security, but limited progress has been made. Chinese soybean production has remained under 20 million tonnes over the past four marketing years, accounting for roughly 20% of domestic crusher demand. The country’s production is expected to reach 18.4 million tonnes in 2022/23 according to the USDA, and the Chinese government has set a target for soybean production of 23 million tonnes by 2025.

“On 19 September, the Chinese government announced it would look to cut the amount of soymeal used in feed products. The country is attempting to curb demand by increasing the use of synthetic amino acids and foraging grass,” says Rasmussen. “By curbing demand, China hopes to drive prices down and shift the supply/demand balance in their favour. While this could limit growth for soybean shipments in the Panamax segment, a reduction in shipped volumes remains unlikely.”
Source: BIMCO, By Neils Rasmussen, Chief Shipping Analyst

Previous: World Maritime Day Message Must Extend Beyond the Boundaries of Shipping, says INTERCARGO
Next: Tankers Riding the “Wave” of Ton-Mile Demand Hikes