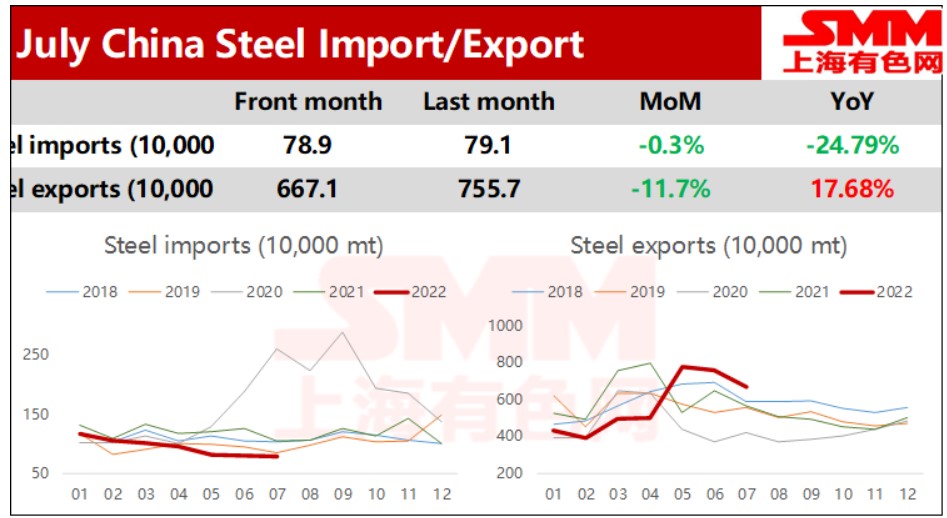 China steel exports continue to decline with overseas demand staying sluggish
In 2022, after China’s steel export volume reached the year-to-date high in May, it immediately entered the downward channel. The monthly export volume in July fell to 6.671 million mt. The steel sector is in the seasonal low in China and abroad, evidenced by sluggish demand from downstream manufacturing sectors. And the orders in Asia, Europe and the United States show no signs of improving. In addition, due to the weak competitive advantage of China’s export quotations compared with Turkey, India and other countries on top of other factors, the steel exports continued to decline in July.

China steel imports hit a 15-year low in July
In terms of imports, the steel imports fell slightly again in July compared with the previous month, and the monthly import volume hit in new low in 15 years. One of the reasons is the rising downward pressure on Chinese economy. The terminal demand, led by the real estate, infrastructure and manufacturing, performed poorly. In July, the domestic manufacturing PMI fell to 49.0, a reading indicating contraction. In addition, the growth on the supply side is still much faster than the demand, hence China’s steel imports have fallen for six consecutive months.

Steel import and export outlook
In the future, overseas demand is expected to extend the weakness. With the digestion of the bearish sentiment caused by the current round of Fed rate hikes, steel prices in many places around the world have gradually shown a trend of stabilising. And the gap between domestic quotes and export prices in China have narrowed after the current round of price slump. 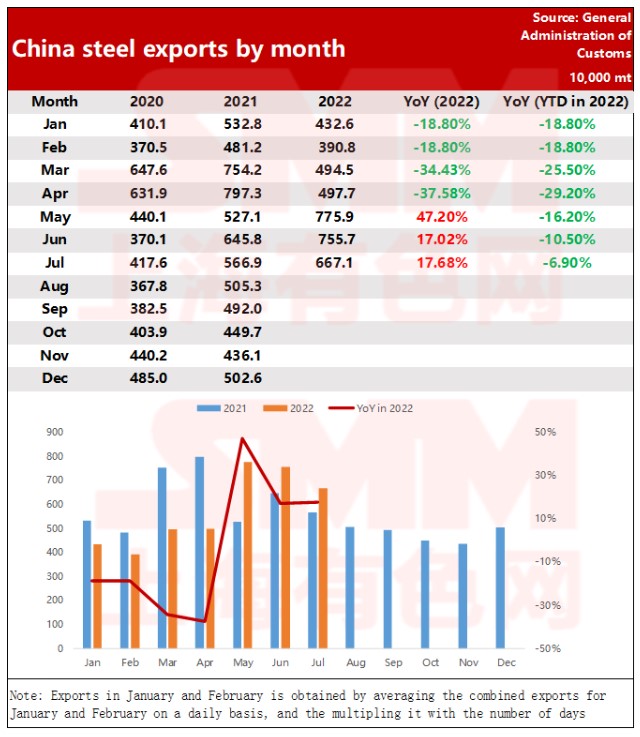 Taking hot-rolled coil (HRC) as an example, as of August 8, the FOB price of HRC for export was $610/mt in China, while the domestic average price stood at 4075.9 yuan/mt, according to SMM, and the price difference was about 53.8 yuan/mt, down 145.25 yuan/mt compared with the spread of 199.05 yuan/mt recorded on May 5. Under the background of weak demand both in China and abroad, the narrowing spread will undoubtedly dampen the enthusiasm of steel exporters. According to the latest SMM research, the export orders received by domestic hot-rolling steel mills in China were still lacklustre in August. In addition, considering the impact of the crude steel output reduction target in China and export restraint policies, it is expected that the steel exports will continue to decline in August.

In terms of imports, China’s steel imports have remained at a low level in recent years. Considering that in the second half of this year, with the help of the country’s stronger and more precise macro-control measures, the Chinese economy is expected to recover strongly, and the consumption and production conditions of various industries will also improve. However, due to the simultaneous weakening of domestic and overseas demand at the current stage, the international steel prices have dropped to different degrees, and the price difference in China and abroad has narrowed significantly. SMM predicts that China’s subsequent steel imports may recover to some extent. But limited by the slow pace of recovery in the actual domestic demand, the room for import growth may be relatively limited.
Source: SMM